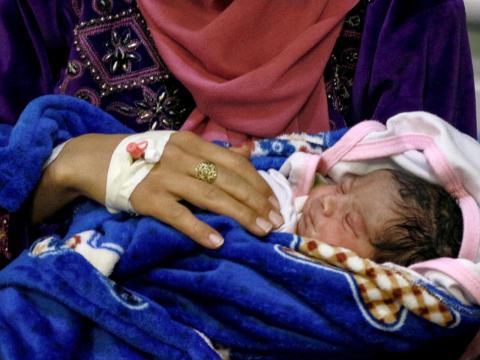 In Jordan Camp, a New Generation of Syrians Born in Exile

Ten years after fleeing war in her native Syria, Hadeel is expecting a third child, brought into a life of poverty and uncertainty at the Zaatari refugee camp in Jordan.

The squalid camp, 50 kilometers (30 miles) north of the capital Amman, is home to some 80,000 Syrian refugees, according to the United Nations.

Half of the camp's residents are children, and many have no memory of Syria, said AFP.

"I was hoping to be at home, in my country," Hadeel said, asking to use a pseudonym for safety concerns.

"Fate decided I would be here, get married and give birth to my children here."

Like most refugees in the camp, she and her family arrived from Syria's southern Daraa province, the cradle of the 2011 uprising against the regime of President Bashar al-Assad.

The ensuing war has killed nearly half a million people and displaced around half of the country's pre-war population.

Hadeel, who is six months pregnant, married a Syrian refugee who also lives in Zaatari, and the couple have two children, aged six and seven.

At least 168,500 Syrian babies have been born in Jordan since 2014, according to the UN, part of an estimated one million children born to Syrians in exile across the world over the same period.

Many are born in overcrowded refugee camps, with limited access to education and the threat of child labor and forced marriage hanging over them.

Sat on a red plastic chair in a large hall, Hadeel awaited a checkup at the only clinic in the camp that delivers babies.

"My children grew up here. When they hear me talking to other women about Syria, they ask me, 'Mama, where is Syria? Why do we live in this?'" said Hadeel.

"I try to explain to them that this is not our country. We are refugees. It's difficult for them to understand".

Some 675,000 Syrian refugees are registered with the UN in Jordan, but Amman estimates the real figure to be about twice that and says the cost of hosting them has exceeded $12 billion.

While fighting in southern Syria has abated, Hadeel said it still is not safe enough to return.

Her cousin, "fed up" with the camp, returned to Syria earlier this year.

He was killed less than a month later, and his widow and five children still in Zaatari do not know how he died.

The maternity ward at the UN-run clinic -- the camp's biggest health facility with 60 staff including 21 midwives -- has 10 beds.

The clinic's director Ghada al-Saad said the facility "works 24/7, offering everything for free, including medicines, treatments, tests and vaccinations" up to the age of two.

Midwife Amon Mustafa, 58, who has worked there since the camp opened in 2012, checks on the new mothers.

"We deliver between five and 10 babies every day, with the five today, the total number of births in the camp has reached 15,963," Mustafa said.

"I know most of the women and children in the camp," she added with a smile.

Nagham Shagran, 20, holding her newborn son, has spent nine years in the camp, where she and her cousin married.

"At first we hesitated to have our first child," she said. "Every human... has the right to be born and live in his or her country, but what can we do?"

Mustafa said staff "are trying" to educate women on family planning and the use of contraceptives, but uptake is limited.

"Children are a blessing, but I hope this will be my last pregnancy," said Eman Rabie, 28, expecting her fourth child. "My husband loves children; he says they are a blessing from God."

Rabie's home in Daraa was destroyed during the war.

"If we are asked to leave the camp and go back to Syria," she said, "I will be the last to leave".