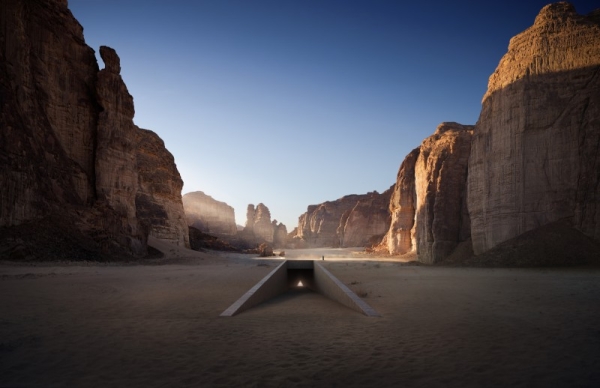 The Royal Commission for AlUla revealed plans for Wadi AlFann, meaning ‘Valley of the Arts’, an awe-inspiring new global cultural destination for contemporary art, where era-defining works by some of the most compelling artists from around the world will be permanently placed in the monumental landscape of AlUla, the extraordinary desert region of north-west Saudi Arabia steeped in thousands of years of natural, historical and cultural heritage.

New, large-scale, site-specific commissions by Manal AlDowayan (b. 1973, Saudi Arabia), Agnes Denes (b. 1931, Hungary), Michael Heizer (b. 1944, USA), Ahmed Mater (b. 1979, Saudi Arabia) and James Turrell (b. 1943, USA) will be the first five works to be conceived for Wadi AlFann, a spectacular valley spanning approximately 65 square kilometers.These initial five works will be completed and unveiled by 2024, marking the start of a continued program of commissions, with more artists and activities to be announced.

Created by some of the world’s most renowned pioneers of land art and artists at the forefront of contemporary practice, the concepts, vision and epic scale of Wadi AlFann’s cross-generational commissions mark a new chapter in art history.

Juxtaposed with historic traces of ancient desert communities, this unprecedented, ambitious and visionary showcase of contemporary artworks will continue growing in years to come, adding to the legacy of this millennia-old location.

Wadi AlFann will offer a profound opportunity to experience art in dialogue with nature. Learning from the desert, the artists are responding to the landscape of AlUla, taking inspiration from its dramatic topography, undulating vistas, remarkable geological structures and complex natural ecosystem.

The works will be created with respect for the landscape, set against the stunning sandstone cliffs and canyons of the vast terrain.

Wadi AlFann will provide unparalleled opportunities for local communities to experience art as a source of education and enrichment.

Through job creation, skills development and engagement with local creatives, Wadi AlFann will strengthen AlUla’s cultural economy, inspiring a new generation of arts professionals and enhancing quality of life for its residents.

This epic new destination will also welcome art lovers, adventurers, and globetrotters from across the world on a transformative cultural journey to a unique place of creative and geographical wonder, continuing the region’s history as a place of cross-cultural exchange.

A keen, sensitive witness to cultural metamorphosis, Saudi artist Manal AlDowayan’s practice revolves around themes of invisibility, collective memory and the status and representation of women.

Her labyrinthine installation The Oasis of Stories takes inspiration from the mud walls of AlUla’s Old Town, inviting viewers to walk through and get lost in an architectonic sculpture that replicates the ancient spaces of Arabic settlements.

The walls of AlDowayan’s maze-like passages will be inscribed with personal histories and folklore gathered by the artist from communities of AlUla.

A leading figure among the concept-based artists of the 1960s and 70s, and a pioneer of environmental art, Agnes Denes’ artistic oeuvre is distinctive in terms of its remarkable aesthetics and engagement with science, philosophy, psychology, linguistics, poetry, history, music and sociopolitical ideas.

Her new work will continue her ongoing series of monumental pyramids: through careful examination of the rocks’ characteristics, these new pyramids will awaken the silent canyons they sit within, representing the past, present and future of mankind, exploring civilization, advancement and achievement, to create a breathtaking environment.

Influential in the second half of the 20th century and continuing into the 21st, Michael Heizer is known for producing large outdoor earthwork sculptures and for his work with rock, concrete and steel that exists both outside and inside museums and galleries.

The earthworks, being outside in the environment, are known to elicit responses not common to architecturally dependent artworks. At Wadi AlFann, he is introducing altogether new lineal/incised engravings in the sandstone rock, relating directly to the extraordinary geology of the area and the varied detail of the Quweira sandstone.

Viewable from a far distance, most of these large-size works will change in appearance as viewers move around the area. Heizer will soon open to the public on a limited basis his monumental sculpture the mile-and-a-half-long City, created in Garden Valley, Nevada, over the course of more than fifty years.

Physician-turned-artist Ahmed Mater, a significant cultural voice documenting and scrutinizing the realities of contemporary Saudi Arabia, creates his new work Ashab Al-Lal that will explore the mythic space between subjective imagination and objective reality by generating a mirage within the sand dunes.

The artist challenges the idea of the landmark as a symbol of status and authority, viewing it instead as a place for the transmission of knowledge. Creating a spiritual, transcendental experience for the viewer, Mater has drawn inspiration from great scientific and philosophical thinkers of the Islamic Golden Age.

An exhibition of maquettes and drawings detailing Mater’s vision for this work opens June 8, 2022 in AlUla’s arts and culture district AlJadidah Village.

For over half a century, James Turrell, a leading figure of the Light and Space movement of the 1960s, has dedicated his practice to perceptual art, investigating the materiality of light and the limits of human perception.

At Wadi AlFann, Turrell will build upon the sensorial experience of space, colour and perception, creating a series of spaces within the canyon floor. Experiencing the thingness of light as well as elements of sky and terrain, the viewer will explore these spaces via a series of tunnels and stairs.

The work examines the very nature of seeing, creating an experience of wordless thought.

The unveiling of the first five artworks will be accompanied by a dynamic, engaging public program that will include performances and tours through the valley.

In partnership with Madrasat AdDeera, the commissions at Wadi AlFann will offer educational opportunities for local communities, including practical, skills-based engagement in the process of conceiving and installing the artworks, sessions with art professionals to develop skills and masterclasses for local creatives with Wadi AlFann’s commissioned artists.

With the preservation of the valley as a central mission, Wadi AlFann is developed in line with the Royal Commission for AlUla’s commitment to the region’s biodiversity and natural heritage, which includes reintroducing wildlife and protecting indigenous flora and fauna.

The site's pavilions, walkways and belvederes will use locally sourced materials and be positioned to enable free movement of camel herds and other native species.

Wadi AlFann will also link AlUla’s two historic capitals — Qurh, one of the seven great marketplaces of Arabia, and Hegra, built by the Nabataeans over 2,000 years ago — adding a rich new dimension to the journey through AlUla that connects its past with its future.

Art and creativity are an important component of the Kingdom of Saudi Arabia’s Vision 2030 and a foundational part of the AlUla experience.

It extends the legacy of the site from ancient civilizations into the present, positioning AlUla as a contemporary cultural crossroads and a destination built by artists.

Forming part of a new nexus of artistic exploration, expression and production, Wadi AlFann is one of various new creative landmarks planned for AlUla as part of its Journey Through Time masterplan, along with the Perspectives Galleries, the Arts District and the Water Pavilions.

The Journey Through Time masterplan, unveiled by the Crown Prince, will see 15 new destinations for culture, heritage and creativity open by 2035.

AlUla is a majestic region of natural and creative heritage steeped in a legacy of cross-cultural exchange.

Home to the ancient Nabataean city of Hegra, Saudi Arabia’s first UNESCO World Heritage Site, the region has been at the crossroads of cultural exchange for millennia, historically lying on the incense trade route and once capital to the ancient Kingdom of Dadan.

Today, it is a living museum of heritage, arts and nature, rekindling its legacy as a vital cultural destination.

“As custodians of this land, a crossroad between East and West marked by 200,000 years of natural, human and cultural history, we must continue to harness the unique legacy of AlUla to build its future.

“It is an honor to be working with such esteemed and celebrated artists to aide our ambitions to further establish AlUla as a world-leading center for art and culture. This visionary destination will build a vibrant and prosperous local cultural economy, forging pathways for the people of AlUla to unlock creative potential and be architects of the region’s future.”

Iwona Blazwick, chair of Royal Commission for AlUla’s Public Art Expert Panel, said: “Wadi AlFann is unprecedented in its ambition, a world-leading platform enabling remarkable artists to create the most significant works of their lifetimes.

“It will set a new global example for experiencing art in dialogue with nature, celebrating the human creativity that unites communities across the world and inspiring current and future generations of artists. A display of such epic scale, set in a terrain as monumental as the AlUla desert, has the potential to shape the course of art history in real time.”

Allan Schwartzman, member of Royal Commission for AlUla’s advisory board, said: “In addition to their unparalleled beauty, the valleys and canyons of AlUla hold layers of history which span thousands of years and countless cultures.

“In each of their projects, these first five artists have envisioned a work which embodies the artistic achievements of our time — sensitive to the magnitude and wonder of AlUla and existing in proximity to the significant archaeological remains and vast history in the process of being unearthed and discovered.

“These artworks are visionary in conception, monumental in physical scale and scope of experience, keenly sensitive to site and context, and singular destination pieces created by artists of different generations, cultural backgrounds, and sources of inspiration.

“Together, they set the foundation for a major new destination for art and transcultural exchange.”