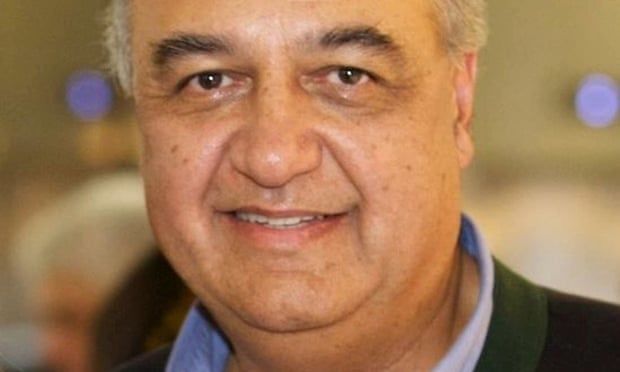 Tri-national was excluded from deal leading to release of Nazanin Zaghari-Ratcliffe and Anoosheh Ashoori
Morad Tahbaz, the British-Iranian left behind when two others were released from Iranian detention a fortnight ago, has ended a nine-day hunger strike at the pleading of his family, his daughter has said.

He remains in jail in Tehran contrary to an agreement the British claimed it had struck with the Iranians.

Tahbaz, a conservationist sentenced to 10 years in jail in November 2019 for being in contact with the US, has been in remission from cancer, and twice been a Covid patient. His daughter Roxanne said his family had pleaded with him to break the strike because of growing concern for his health. He ended the hunger strike on Monday.

Tahbaz, 66, initially refused food in protest at being returned to jail following a confused 48 hours in which he was allowed to his family home in Tehran, then sent to a hotel before finally returning to jail.

Roxanne Tahbaz, speaking on BBC Radio, said her family regretted following the UK Foreign Office’s advice to let it pursue quiet diplomacy rather than campaign for his release. The families of Nazanin Zaghari-Ratcliffe and Anoosheh Ashoori, who were released a fortnight ago, rejected official government advice to remain silent.

She said: “We had been expecting to see him on the plane, but before that happened we were told this was to be an unlimited furlough and a lifting of the travel ban on my mother. Neither has come to pass. He is still in prison and she is still on a travel ban.

“We have been told by the Foreign Office they are working on it, but it is more complicated because the Iranians chose to see him as an American, but it is not for the Iranians to decide.

“He is stuck in a political chess game but as a pawn, but we feel no one is protecting him now because his country has left him behind. He is British and British-born no less and that should have saved him from that fate.

“But here we are despite the Foreign Office advice to stay quiet and out of the press. We are now trying to shed light and ask questions because he should never have been left behind as a British citizen.

“It was essential to us and to him that he was not forgotten.”

Family members believe the British foreign secretary, Liz Truss, made the political decision to leave Tahbaz behind in the interest of securing the release of the others, and was misleading about the agreed length of his furlough from jail.

They claim he was offered only 48 hours at his family home, not a permanent furlough, but that is disputed. There was also confusion within the family home, including for some elderly relatives, about the presence of a large number of armed guards.

A potential deal nearly 18 months ago involving all three British-Iranians did not go ahead when the British refused to accept Iran’s exclusion of Tahbaz.

The Foreign Office said it was working to secure his permanent release, but his plight has been made more difficult by the fact that he is a tri-national and Iran treats him primarily as a US citizen.

The US special envoy for Iran, Rob Malley, said at the weekend the US had agreed that the British would take the lead in the talks about the plight of US dual nationals. The US has no direct diplomatic relations with Iran. That effectively means Tahbaz is being treated as part of a US-Iranian trade, probably in the context of the outcome of the Iran nuclear talks.
#Covid