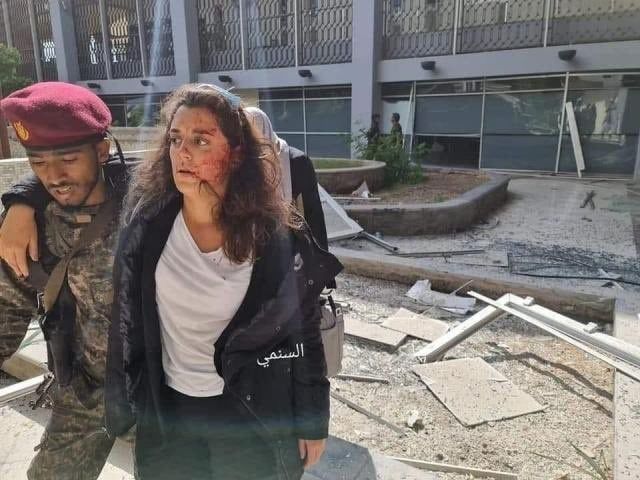 The Iran-backed Houthi militia has carried out a continuous campaign of arrests targeting media professionals, journalists and activists over the past few days, the Yemeni government said on Friday.

The detention campaigns, carried out in areas under militia control, reflect “the state of terror of the Houthi leaders’ growing state of popular resentment, and maturation of reasons for the upcoming uprising to uproot the Houthis,” said Yemeni Minister of Information Moammar Al-Eryani.

In a series of messages posted on Twitter, the minister continued: “This campaign against voices that expose the Houthis’ crimes, violations and corruption is reminiscent of the (Iranian) mullahs’ regime practices and repression against youth protesters in Iran, which failed to quell their uprising and ignited popular anger in all Iranian provinces.

“We are surprised by the international silence regarding crimes of abduction and enforced disappearance of journalists, media and activists.”

Al-Eryani urged the international community to adopt a clear stance denouncing the Houthi militia’s crimes and violations against the Yemeni people, and to ensure the perpetrators and their leaders are held accountable and face prosecution.

He also marked the second anniversary of the day an explosion targeted Aden International Airport after a plane carrying members of the recently formed Yemeni government landed there. The attack killed 28 people and injured 107.

“On Dec. 30, 2020, we recall the terrorist crime by the Houthi militia, affiliated with Iran, of bombing Aden airport upon the arrival of a plane carrying Prime Minister Dr. Maeen Abdulmalik Saeed, and members of the government, while the airport was crowded with thousands of state leaders, journalists, citizens and children,” Al-Eryani wrote.

Despite this, he said, the international reaction had been limited to statements of condemnation that did not match the severity of the crime, which he described as unprecedented.

“We call on the international community, the UN and the permanent members of the Security Council to fulfill their responsibilities in confronting terrorist activities, designate the Houthi militia as a terrorist group, and prosecute and hold perpetrators accountable,” Al-Eryani said.

“This heinous crime represents a flagrant violation of the rules of international and humanitarian law and amounts to war crimes.”