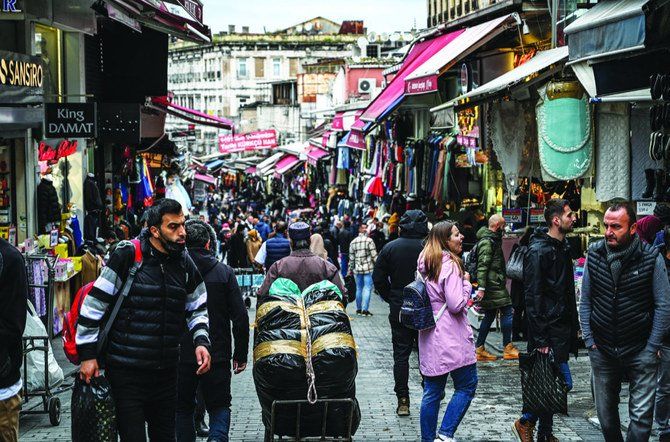 Turkey and Saudi Arabia are gearing up to further their ongoing normalization of relations with the latest talks between the members of inter-parliamentary friendship groups taking place in Riyadh on Wednesday.
The Turkish delegation is planning another visit to Jeddah on Thursday evening to meet officials and businesspeople.

The visit is a significant step toward institutionalizing ties between the two countries, which are set to expand their cooperation avenues.

The chairperson of Turkey’s parliamentary friendship group, Halil Ozcan, and his accompanying delegation were hosted by the head of the Shoura Council Dr. Abdullah bin Mohammed Al-ASheikh.

The council started its new session on Oct. 16 and hosted the Turkey-Saudi Arabia Friendship Group as its first foreign delegation.

In the near future, the group’s role will be to further boost parliamentary relations and institutionalize state-to-state ties.

“This visit will be followed soon by a delegation of parliamentarians from the Kingdom. We invited them to Turkey to further discuss different political projects together in the coming period,” Ozcan told Arab News.

“We also met with Turkish businesspeople working in the Kingdom, and they said that they have begun seeing the positive impact of normalization of bilateral ties on their own businesses,” he added.

Both Turkey and Saudi Arabia have also shown interest in joining the BRICS International Forum.

“Bilateral trade flows, Saudi investments in Turkey and Saudi tourists visiting Turkey are all areas that possess significant room for improvement, provided that Riyadh and Ankara are willing to nurture and encourage greater economic exchange,” he added.

Mogielnicki said that Turkish construction companies are eager to be involved in various Saudi megaprojects.

“And, of course, Saudi Arabia brings to the table strong credentials when it comes to energy cooperation with foreign partners,” he added.

On the day of the visit, the Middle East’s largest broadcaster, Saudi-owned MBC Group, announced it had signed a five-year partnership with two Turkish production companies — Medyapim and Ay Yapim — to share popular Turkish content along with original Arabic-language dramas being produced for the Middle East and North Africa region in the coming years.

During official meetings in June, Saudi Investment Minister Khalid Al-Falih said there is an investment opportunity worth $3.3 trillion between the two countries. Eager to increase their bilateral trade activities, Turkey and Saudi Arabia are also planning to hold a business forum in Turkey, the details of which were discussed during the latest meeting.

During the first nine months of 2022, Turkey’s exports to Saudi Arabia increased by 180 percent and reached over $420 million.

Dr. Gokhan Cinkara, an expert from Necmettin Erbakan University, thinks that the strengthening of institutional ties provides a necessary basis for developing regional cooperation projects between the two countries.

“This visit is a good opportunity to test the depth of bilateral ties on several fronts,” he told Arab News.

According to Cinkara, the most significant cooperation avenue between the two countries appears to be the defense industry.

“The procurement by Turkey of necessary defense equipment that meets the domestic needs of Saudi Arabia will be a good start in developing ties and building a common defense front against the present and rising security threats in the region,” he said.

After Turkish President Recep Tayyip Erdogan visited the Kingdom earlier this year, Saudi Crown Prince Mohammed bin Salman paid a visit to Ankara in June when the two countries announced they had lifted restrictions on several fronts, including trade, flights and media.

Cinkara expects that Turkey and Saudi Arabia will take some steps to restrict Iranian influence in the region in the coming period.

“The establishment of a joint intelligence mechanism may be expected to counter-balance the geostrategic instability that Iran has been producing in the region for a long time,” he said.

In the meantime, Turkey and Saudi Arabia recently helped mediate a prisoner exchange deal between Ukraine and Russia.