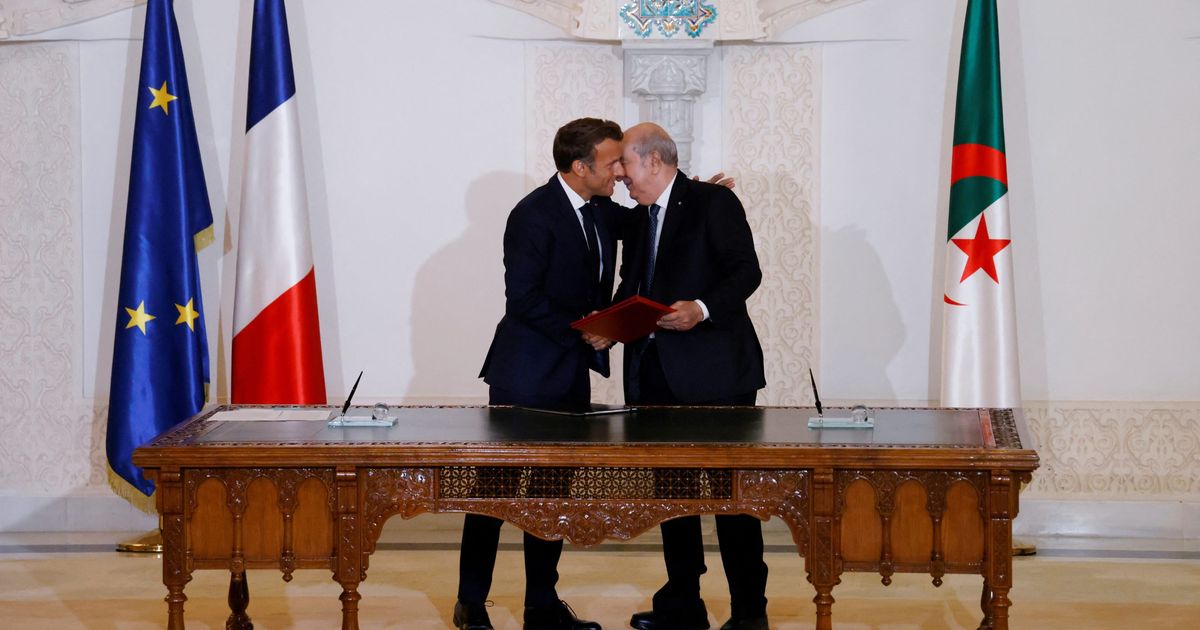 The French president was in Algeria last week to boost ties with its former colony as Algeria signals a shift away from French in education.

In the world of diplomacy, few details carry as much import as language. And few languages carry the diplomatic and cultural heft that French has long boasted.

So when the sign on Emmanuel Macron’s lectern at the Algerian presidential palace last week read “Presidency of the Republic” instead of “Présidence de la République” in French (after all, Algeria was part of the French colonial empire for well over a century), diplomats and casual observers in Paris took note.

“I wasn’t surprised but I was shocked [Algeria] would do such a thing during the visit of a French president,” said France’s former ambassador to Algeria, Xavier Driencourt.

“It’s very deliberate. It’s a message for France but also a way of telling the Algerian people that there’s nothing special about French, it’s a language like any other,” he added.

The choice of the host’s language during Macron’s trip is the latest signal the government wants to phase out French as one of the working languages of Algerian officialdom. In July, Algerian President Abdelmadjid Tebboune announced that English would be taught in primary schools starting this year in what has been presented as a gradual phasing out of French. “French is a spoil of war, but English is an international language,” said Tebboune.

The use of French, particularly in public administration, businesses and universities, is part of a complicated legacy of the colonial era, which ended in 1962 after a brutal eight-year war of independence. France is now in a soft power battle to maintain influence in Algeria as its former colony moves to replace French for English in schools. Arabic and Tamazight are the two official languages of Algeria, with most citizens speaking an Arabic dialect at home. While French is not an official language of the former French colony, it is taught in Algerian elementary schools starting around age nine and is spoken by a third of Algerians. English is only studied in secondary schools beginning around age 14. If the Algerian government has its way, the status of the two languages will be reversed with English language instruction starting in elementary school swapping out French.

With close to 15 million French speakers according to the International Organization for the French language, Algeria is the third-largest French-speaking country in the world, after France and the Democratic Republic of the Congo. For France, the loss of Algeria would be a huge dent to its sphere of influence, which is a constant concern for French politicians.

“If France doesn’t get its act together, if it doesn’t stop the replacement of French by English, it will lose its influence, it will lose people able to spread its culture and defend its interests. If there is no change, the French sphere of influence will disappear,” said Dr. Ryadh Ghessil, French language lecturer at the University of Bourmèdes, east of Algiers.

But while the move away from using French is seen by some as a way of exorcising the Mediterranean nation’s colonial past, many Algerian French-speakers look askance at a decision they say is politically motivated.

“The government is trying to boost the use of Arabic, but also encourage English because it’s seen as more culturally neutral in Algeria,” he said.

“They are doing it because behind every language there is a culture, and the French language creates people who are critical, who have read Camus and who are a problem for the powers that be,” he said, with reference to the French writer and resistance fighter Albert Camus, who was born in Algeria.

Speaking to the world

Amid the bustle of downtown Algiers, Algerians on their lunch break take a moment to sit in the sun or catch up with friends before going back to work or school. Outside the Mustapha University hospital, the view on language is unanimous: Most would rather study English instead of French as their second language if they were given the choice.

“If you want to work in Algeria you need French, but if you want to get a job in Europe, Canada or the United States, you want English,” she added. 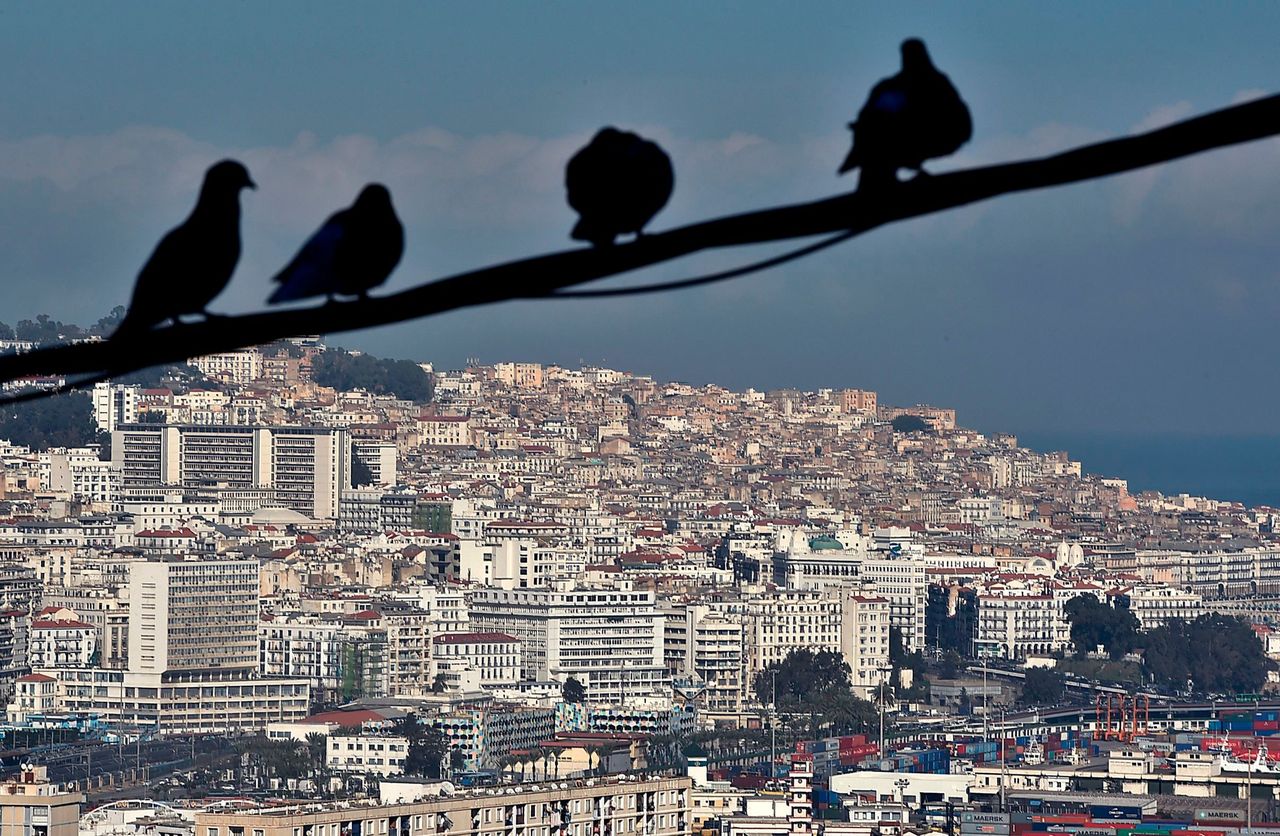 Amid the bustle of downtown Algiers, Algerians on their lunch break take a moment to sit in the sun or catch up with friends before going back to work or school

“Young people prefer to speak English because everybody does. French is only spoken in a handful of countries,” echoed 23-year-old nurse Abdelrahim Sakraoui, sporting fake Yves Saint Laurent sunglasses and a hipster beard.

“The history of colonization also puts us off studying French,” he added.

In this corner of Algeria, France’s soft power — a highly subsidized culture industry and accessible state TV channels — appears to be failing to punch through the U.S.’s global reach, with locals naming American singers and films as their favorites.

And the desires of the younger globalized generations appear to dovetail with a historic hankering among nationalists in Algeria to phase out the use of French in officialdom, which dates back to the early days of independence.

“It’s not a new demand and the move is seen as a way of emancipating oneself from the old colonial ties,” said Amar Mohand-Amer, historian at a research center in the Algerian city of Oran.

“It’s cathartic, we want to liberate ourselves from the French language,” he said.

And according to Mohand-Amer, the language issue also rears its head every time the Franco-Algerian relationship hits difficulties — as it did last year.

Macron’s Algeria visit last week was aimed at resetting relations after the French president offended the Algerian regime when he accused them of instrumentalizing the colonial past.

Last year, the French president accused the Algerian government of being “a politico-military system” that encouraged “a hatred of France” and was “cashing in on the colonial past.” In response, Algeria recalled its ambassador for three months.

Algeria’s public shift to English, the signing of a multibillion-euro gas deal with Italy in July and Algeria’s decision to hold joint military exercises with Russia in November were all signs picked up in Paris and viewed by some as a threat to its shrinking sway in the region. Macron’s visit to Algeria also came shortly after a visit to French-speaking Cameroon and Benin against the backdrop of France’s military withdrawal from the Sahel region.

Many observers note that France is fighting to maintain its influence in what was once called “la Françafrique” in the years after the independence of former French colonies in Africa.

While the number of French speakers in Africa is set to increase, the proportion of people speaking French in Africa is expected to plateau, according a report from the International Organization for the French language.

During his visit, Macron paid particular attention to publicly supporting the Franco-Algerian community, the bedrock of the continued use of French in Algeria.

“We want to have a more flexible approach on who we allow into France, to the families of binational citizens, but also artists, athletes, business leaders and politicians who contribute to creating the bilateral relationship,” he said on Friday in Algiers, adding that a deal on visas for Algerians would be announced in the coming weeks.

Macron also met a group of young entrepreneurs at the French embassy in Algiers, some of whom anonymously expressed concern at the government’s desire to phase out French.

“It reminds one of the Arabization policies in 1970s, which were catastrophic for Algeria. To get rid of French, Arabic teachers from Syria and Egypt were brought in, but they were often not qualified, didn’t know how to write properly in Arabic,” said Brahim Oumansour, North Africa expert for the Paris think-tank IRIS.

“Algeria spent a long time trying to repair the effects of that mistake,” he said.

The tide might not have fully turned yet against the French language. The gestures signaling a reconciliation between Macron and his counterpart Tebboune were numerous during the visit last week, with the leaders signing a statement of cooperation to open schools, translate French and Algerian works of literature and boost ties between universities on both sides of the Mediterranean.

“Now that there are signs of goodwill on both sides, maybe the language question will be revisited,” mused Oumansour.