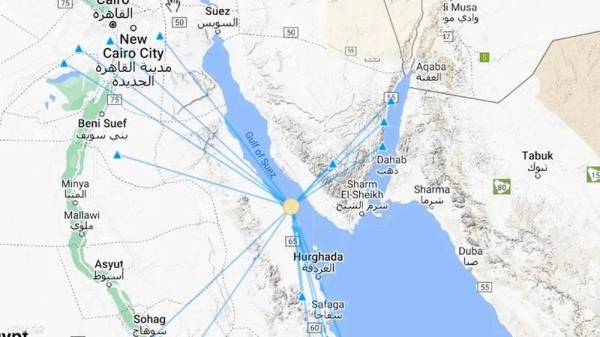 On Tuesday, the stations of the Egyptian National Seismic Network (ENSN) recorded an earthquake 26 km southwest of Al-Tur, that was felt by Cairo residents.

The institute received reports that shaking was felt, but no losses of life or property was reported. A number of citizens, in several governorates in Egypt, felt this earthquake, on Tuesday.

The main areas affected were northern cities of the Red Sea, Hurghada, Ras Ghareb and Ras Shuqair, were exposed to earthquake.

Eyewitnesses confirmed, in the governorates of Cairo, the Red Sea, Sohag, Minya, Beni Suef, and South Sinai, occurrence of the tremor in their governorates.

The National Institute for Astronomical Research said that the earthquake Tuesday, 26 km southwest of Al-Tur will have aftershocks over the course of two days.

And the institute continued on its official page on the social networking site Facebook: “There will be aftershocks of that earthquake, but its strength is much less than the main earthquake, and it may not be felt by any of the citizens, and that will be during the day and tomorrow at the latest.

A number of citizens, in several governorates in Egypt, felt an earthquake after two o'clock in the morning on Tuesday, and the northern Red Sea cities subjected to the earthquake saw the residents of these cities cite feeling the quake.

The institute also revealed the reasons why some citizens did not feel the earthquake, and indicated that the tremor that the country witnessed on Tuesday will have aftershocks over the next two days.
#Facebook