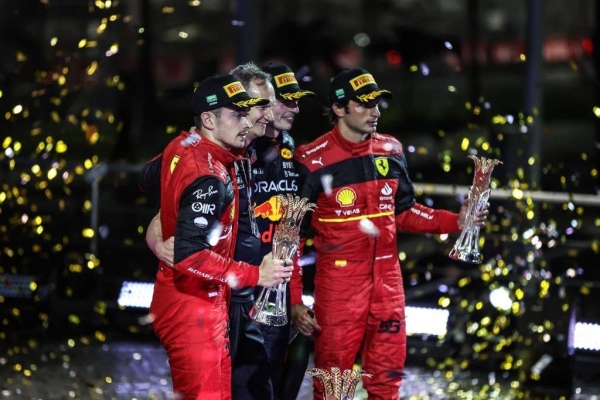 Max Verstappen has won the 2022 Formula 1 STC Saudi Arabian Grand Prix after a late fight with Charles Leclerc.
Pole sitter Sergio Perez lost out with a safety car just after his pitstop, allowing Leclerc to gain the lead. Leclerc controlled the race until Verstappen started a late push and took the lead on lap 46.

Carlos Sainz rounded off the podium, with Perez in P4.

Leclerc and Verstappen started their battle on lap 42 for the race win. As he did seven days ago, Leclerc let Verstappen through to get the DRS on the home straight. Second time around, they both locked up before the activation point.

Leclerc floored it first and opened a big enough gap to fend off a DRS chase. On the third occasion, Verstappen got the DRS down the home straight and made a successful move on lap 46.

After a successful start in Bahrain last weekend, the new rules and regulations once again demonstrated their worth with both Alpine drivers engaging in a multi-lap battle in the opening stint of the race.

Seven-time World Champion Lewis Hamilton started on the hard tyres and attempted a long run and wait for a late safety car. Mercedes eventually made the pitstop on lap 41, just after it reopened following a closure. The Brit finished 10th. Nicholas Latifi retired after an accident at the final corner early in the race. Fernando Alonso, Daniel Ricciardo and Valtteri Bottas all lost power and retired on lap 37.
#Mercedes