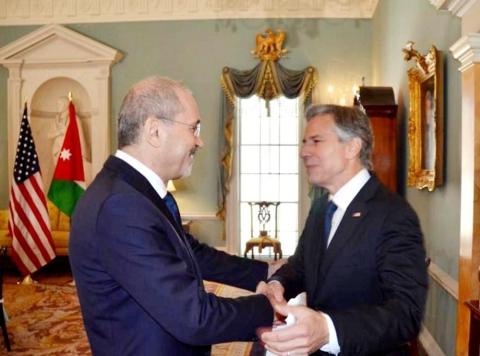 US Offers Unprecedented Support to King Abdullah’s Reforms in Jordan

The United States and Jordan signed on Friday an unprecedented Memorandum of Understanding (MoU) that offers financial support to the kingdom.
“The MoU will support key reforms conceived of and led by King Abdullah’s government, focusing on improving the lives of Jordanians in tangible ways – reforms like improving essential public services,” US Secretary of State Antony Blinken said during a joint press conference with his Jordanian counterpart, Deputy Prime Minister Ayman Safadi, in Washington.

The agreement provides Jordan with US financing of $1 billion a year for a period of seven years.

“The unprecedented level of foreign military financing reflected in the MoU will support the modernization of Jordan’s military, which is essential to these and other efforts,” Blinken added.

The MoU is a testament to the strength of the relationship between Jordan and the United States, he stressed.

“It reflects a shared interest in a more stable, safe, and prosperous Middle East, and our commitment to deepen the partnership between our governments and between our peoples to help achieve that goal,” he went on to say.

“This is now the fourth memorandum of understanding that our nations have adopted, going back to 2010, to deepen our strategic partnership.”

Blinken said it will not only cover the longest period, but will also provide more assistance than any prior MoU, like improving essential public services; tackling the water crisis, which is being exacerbated by climate change; expanding economic opportunities so that everyone in Jordan, including women, underserved groups, can reach their full potential.

However, he did admit that “ambitious reforms like these take time.”

The MoU is also an investment in Jordan’s exceptional leadership on regional and global challenges, Blinken remarked.

“Jordan has long offered a refuge to people displaced by regional conflicts and other crises, something that we’ve seen most recently in the extraordinary compassion that the Jordanian Government and its people have shown to Syrians,” he said.

He stressed that Jordan continues to play a key role in promoting regional security and stability.

“This includes Jordan’s ongoing commitment to continue working for a just, lasting, comprehensive peace between Israel and the Palestinians on the basis of a two-state solution along the 1967 lines with mutually agreed land swaps,” Blinken noted.

Moreover, he explained that the unprecedented level of foreign military financing reflected in the MoU will support the modernization of Jordan’s military, which is essential to these and other efforts.

For his part, Safadi said the MoU is unprecedented and reflects the strength of the bilateral ties shared between Amman and Washington.

He spoke about King Abdullah II and US President Joe Biden’s latest meeting in Jeddah, which showed that the two countries’ partnership is strong and permanent.

A joint statement on the signing of the MoU said the US commitment to Jordan’s security and prosperity is ironclad.

“This MoU will address the extraordinary challenges Jordan faces, as it mitigates the heavy impact of regional challenges, supports King Abdullah II’s economic reform program, and ensures the long-term strength of the close partnership between the United States and Jordan,” read the statement.
#Joe Biden