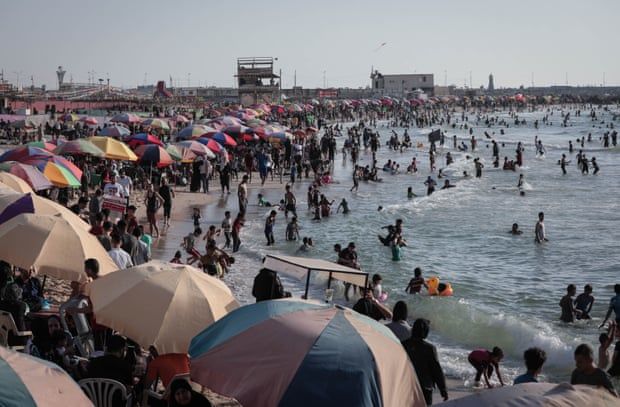 ‘The sea is more blue’: Gazans head to the beach after sewage cleanup

On the beach in Sheikh Ijlin, a neighbourhood in the south of Gaza City, no one is paying attention to a nearby Islamic jihad military drill. Children run in and out of the Mediterranean waves, begging their parents for camel rides and candy floss, ignoring the thuds as rockets belonging to the Palestinian militant group hit the water.

Thanks to a dedicated sewage cleanup effort, for the first time in years most of the Gaza Strip’s coastline is clean enough to swim in; this summer, thousands of families are rediscovering the besieged territory’s foremost recreational outlet. 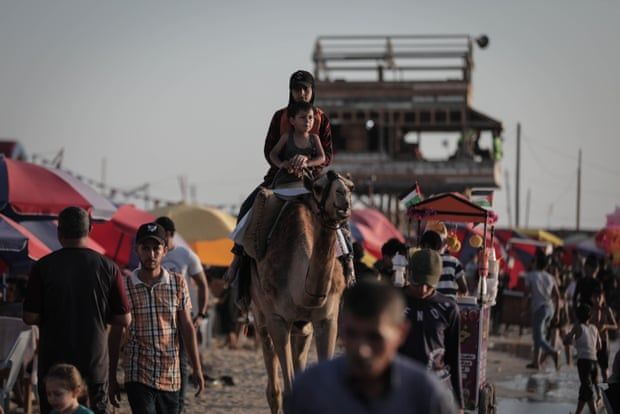 A little girl and her brother ride on a camel on the beach in Gaza.

“We didn’t come for seven years because the water was not safe. Now it looks so much better … The colour is different, more blue. This is our second beach day this year,” said Nabila Haniya, 40, who sat at a picnic table with several other women while their children played. “We have a lot of wars and troubles. The kids deserve to have some fun.”

Fifteen years into a joint Israeli-Egyptian blockade, clean water is one of the most pressing issues for the 41km-long strip, which is home to 2.2 million people. Almost 97% of the water in Gaza’s sole aquifer is no longer potable: without proper maintenance and with Israeli restrictions on imports, sewage treatment plants were overwhelmed years ago.

Untreated waste has flowed directly into the sea for more than a decade, creating an environmental disaster and polluting one of the only affordable opportunities for fun in the isolated Palestinian enclave. 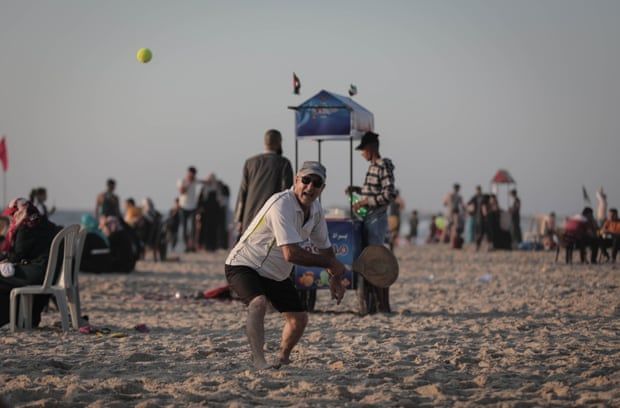 Over the last year, however, Gaza’s three internationally funded sewage treatment plants have been able to step up operations, in part owing to a more steady and plentiful supply of electricity. In October 2021, 180,000 cubic metres of sewage a day was pouring into the Mediterranean; now, 120,000 cubic metres, or 70%, is going to the modern treatment centres, and the remaining 30% is partially treated, meaning 95% of waste is removed before the water re-enters the environmental cycle.

The improvements have reduced sea pollution to its lowest level in years, leading the local water authority to declare that 65% of the coastline is now categorised as “green” or “yellow”, which means safe enough for swimming.

For the seven lifeguards scanning Sheikh Ijlin’s beach from an elevated wooden hut, this summer is the busiest season they can remember. There are only a handful of red flags warning against swimming on this stretch of the coastline, and they are to warn of currents, rather than water quality. 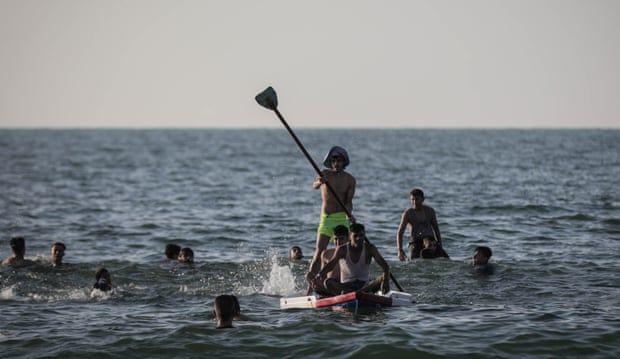 A man rows on a hasaka in the sea.

“Ramadan was more in the summer months for a while, we had the war last year, and Covid,” said the head lifeguard, Samir Shallala, 45. “This year it’s hot already and we need a lot of eyes on the beach.”

The clear, blue water is a much-needed respite for people in Gaza, where movement is severely restricted. More than 50% of the population is out of work, and electricity and medical infrastructure has crumbled. An Israeli ban on the entry of what it deems “dual-use goods” such as building materials that can be repurposed by Hamas, the militant group in control of the strip, also poses a continued threat to the sustainability of Gaza’s clean water supply.

“We need to replace spent pumps in the sewage treatment and desalination facilities, because otherwise they will overflow. But I can’t just place an order, I have to get approvals and negotiate with Israelis to bring any parts in. By the time I have done that, even more damage has been done,” said Omar Shatat, the deputy executive director of Gaza’s Coastal Municipalities Water Utility.

“We could rebalance the water cycle in Gaza in five years if it wasn’t for the occupation. As it is, you can’t call anything here sustainable. I try to anticipate what Gaza’s needs will be in five years, 20 years’ time, but it’s impossible,” he said. 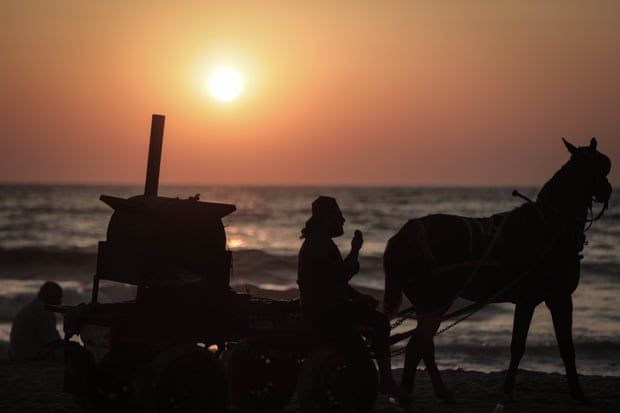 A sweet potato seller who sells produce on horseback returns to a fixed spot on the beach.

The progress made in cleaning up the sea this year is fragile and could easily be lost, Shatat added. “If the electricity supply becomes unreliable again, more sewage will be pumped into the sea. I think the reason things changed is because sewage here became such a huge issue it was starting to affect beaches and desalination plants in Israel too.”

The rejuvenation of Gaza’s beaches is a major step in that it shows environmental cooperation between Palestinians and Israeli is possible, said Gidon Bromberg, the Israeli co-director of EcoPeace Middle East, a joint Israeli, Palestinian and Jordanian environmental peace-building organisation, which played a big role in cleaning up Gaza’s seawater.

“This is perhaps the only good news to come out of Gaza in a decade,” he said. “You can never disengage from a shared environment, you are always going to be dependent on your own and your neighbours’ ability to manage it.

“The peace process may have lost all urgency, but tackling the climate crisis and water security, those are things that bring benefits to both sides. It’s about creating a healthy co-independence.”