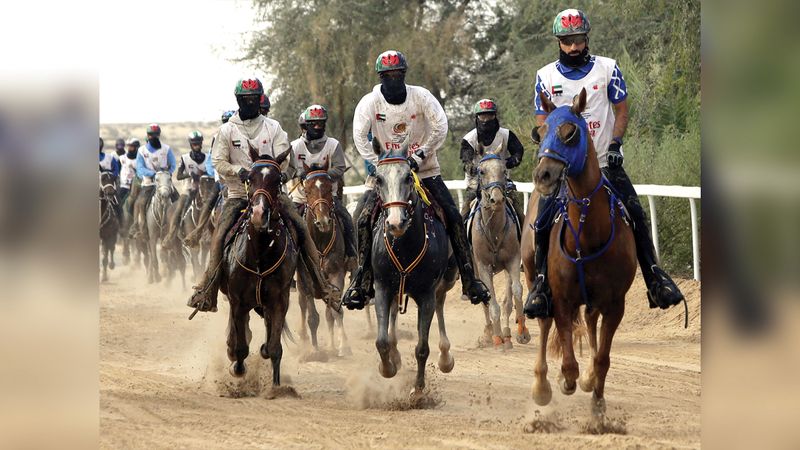 Jackie Abdullah Al Ameri from F3 Range on horseback “Amira” won the title of the last edition of the Crown Prince His Highness Cup in Dubai for his skill, and set a time of 4.04.54. A fraction of a second from second-place finisher Suhail al-Kailani, M7 and jockey Hamdan Ahmed al-Marri, who drove the “Baylon” horse to the stables, finished third in the last edition of the “Shuman T” horse. F3 Staples.

For his part, Sheikh Rashid bin Dalmook Al Maktoum, President of the Dubai Equestrian Club and the Dubai Equestrian Club, confirmed that the Dubai Crown Prince Endurance Cup is an invaluable event that holds a prominent place in the equestrian and tolerance community. His Highness is associated with the name of Sheikh Hamdan bin Mohammed bin Rashid Al Maktoum. The Crown Prince of Dubai, Chairman of the Executive Council, Youth Knight and 2014 World Tolerance Champion in Normandy, France noted that the event was a great celebration. In addition to His Highness’s support and contributions to the sport by following in the footsteps of Vice President and Prime Minister His Highness Sheikh Mohammed bin Rashid Al Maktoum, His Highness’s association with this genuine sport has achieved many global achievements. Ruler of the United Arab Emirates and Dubai, “Arab Knight” and World Champion of Tolerance at the 2012 World Cup in the United Kingdom.

Sheikh Rashid bin Dalmouk Al Maktoum added: “The 14th edition of the race will be characterized by strong and hot competition between different staples, as in previous years,” praising the support of successful participants at the Emirates-led event. Airlines, for renewed sponsorship of the main race.

The President of the Dubai Equestrian Association and the Dubai Racing Club congratulated all the jockeys participating in the Dubai Crown Prince Trophy and explained that all the crews had intensified their efforts to create an organization worthy of the prestigious position of the event. We hope the endurance, and guests and visitors of the event will have the best time for endurance in Dubai International City.

For his part, Major General Dr. President of the Emirates Equestrian and Racing Federation. Ahmed Al Raisi confirmed that the Dubai Crown Prince Endurance Cup is one of the most important events and championships on the endurance sports calendar. It is significant because it is named after the Crown Prince of Dubai, Sheikh Hamdan bin Mohammed bin Rashid Al Maktoum.

Al Raisi expressed his delight at the support and enthusiasm for the sport of endurance, which translates to the Crown Prince endurance festival in Dubai, a festival that showcases the wide participation of the best trainers, jockeys and horses with extensive experience. The United Arab Emirates presented global models and unique experiences throughout the history of the sport of tolerance, at the level of organizing major championships or at the level of competition, which helped to lead the world scene and gain leadership in the sport of tolerance.

For his part, Adnan Qasim, CEO of Emirates Airlines, expressed his pride in sponsoring the Dubai Crown Prince’s Tolerance Ceremony over the years. He said: “We look forward to a new chapter of commitment and dedication from riders and their strong relationship with their horses, their skills and adaptive skills to tackle challenging terrain, and we hope that this year’s race will continue to achieve success and elevate this unique sport to new heights.