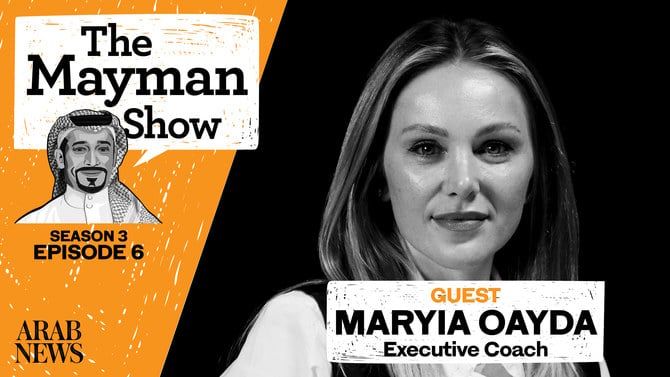 The Saudi people as much as the Kingdom’s diversifying economy were what made the country so appealing, a top human subjectivity coach has said.

But speaking on “The Mayman Show,” she revealed that her initial thoughts about moving to the Kingdom were that it would be too conservative and lacking entertainment.

She said: “I read a couple of news articles that said women had to wear abayas. But my actual experience of Saudis was very interesting.

Oayda pointed out that the nation and its people were nothing like the picture portrayed in the stories she had read and instead she was captivated by the Kingdom’s charm.

“After a couple of months, I realized that the people were super sweet, educated, and spoke good English, and my journey just began. I found a lot of friends, and now it’s my second home.”

It was after completing her first project in the country that Oayda said she fell in love with Saudi Arabia.

“By the way, I also met my husband here. I think that’s where that love took a major place in my experience in Saudi Arabia,” she added.

Her coaching method was developed after interviewing 600 movers and shakers in the region.

She said: “My methodology was inspired by the nonlinear nature of music and from conversations with successful business magnates in Saudi Arabia, southeast Asia, Malaysia, Indonesia, Thailand, and Dubai as well.”

She is currently working as an executive coach for leaders in the health, information technology, digital education, and finance sectors.

“But I would say that the hottest sector currently in Saudi Arabia is our fintech sector, technology. Of course, it’s the sector that drives the economy, it’s a part of Vision 2030 we all know, it’s diversification of the economy, shifting the focus from oil and gas to other sectors. And so, one of those is digital, IT,” she added.

Oayda noted the drive for success shown by many of the professionals running new companies in Saudi Arabia, particularly in the digital and fintech sectors.

She said: “I’m working with them because these Saudi companies need more guidance and attention, as they are going at supersonic speed.”