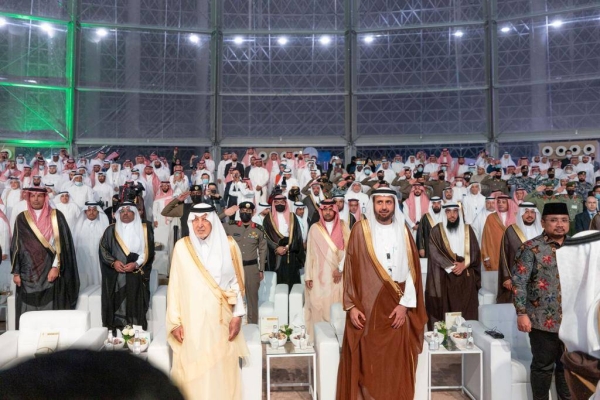 “Expo Hajj”, the conference and exhibition of Hajj and Umrah services is all set to be held in Jeddah from 6-19 Jumadi II 1444 H corresponding 9-12 January 2023.
The annual event will be organized by the Ministry of Hajj and Umrah under the patronage of Prince Khaled Al-Faisal, Advisor to the Custodian of the Two Holy Mosques and governor of Makkah region.

The “Expo Hajj” is part of the Ministry's ongoing efforts to develop innovative services and solutions to better serve pilgrims. The Ministry works to improve their journeys to the Two Holy Mosques and enrich their religious and cultural experiences in order to fulfill the goals of the Saudi Vision 2030.

The four-day event aims to build a thriving digital ecosystem that will help pilgrims have better experiences. It also brings together influential people from all over the world to discuss and plan technical advancements based on solid scientific foundations, to anticipate the future needs of pilgrims, and to create chances for partnerships, agreements, and initiatives on a local and global scale.

Dr. Tawfiq Al-Rabiah, Minister of Hajj and Umrah, stated that the conference presents the projects and initiatives that provided by Saudi Arabia for all pilgrims. He also emphasized the great role of KSA to facilitate performing Hajj and Umrah. He refers to the unique opportunity for creative thinkers to come together and share their knowledge, achieving the Saudi Vision 2030 objectives.

According to Al-Rabiah, the Ministry is presently preparing to host the "Expo Hajj," an event that will attract a limited group of elites from both the public and private sectors. There will be over 200 speakers and participants from both sectors at the event, all working together to generate fresh, creative ideas that will exceed guests' expectations.

Al-Rabiah elaborated, "We look forward to concluding more agreements and business partnerships at this conference, and we expect the number of agreements to reach 400," noting that the conference attracts widespread international attention and will feature the attendance of delegations representing more than 56 countries, including ministers, ambassadors, and consuls.

“Expo Hajj” is expected to witness 400 partnerships and agreements in the presence of 57 international delegations. There will also be 10 keynote sessions, 13 panels and Hajj Talks, and 36 workshops, in addition to many events and activities associated with promoting a culture of quality in providing Hajj and Umrah services, such as the Islamic Exhibition, the Hajj Hackathon and the startups area.

The conference will discuss and highlight a wide range of themes relevant to the development of services for guests, including logistics, transportation, crowd management operations, housing and hospitality services, catering services, facility and service management, safety and health care, and enriching pilgrims’ experiences.

The first edition of the conference in 2021 was a smashing success, with over 45,000 attendees and 115 commercial agreements with exhibitors. In its second edition in 2022, the conference featured a wide range of scientific sessions, workshops, and training programs. Many public and private sector Hajj and Umrah operators, as well as several ministers of Islamic affairs, endowments and Hajj from around the world, were present at the event.