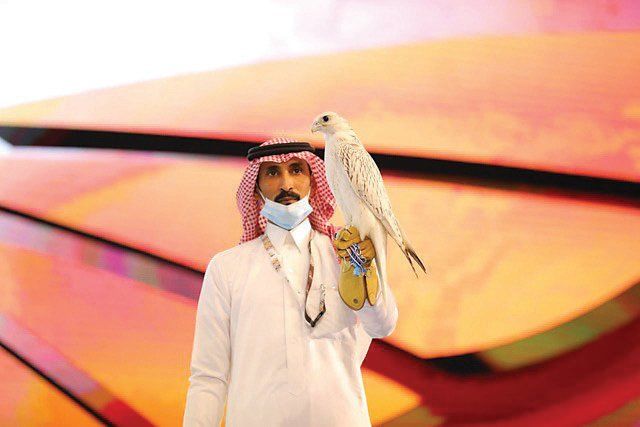 A rare falcon has been sold for a record-breaking $93,347, the highest amount ever paid at a Saudi auction for falcon breeders.

On day eight of the International Falcon Breeders Auction, organized by the Saudi Falcons Club, bidding for the Super White Gyrfalcon farkh (under a year old) from the Canada-based Jim Wilson Falcons opened at $66,676 and closed at $93,347.

The identity of the buyer has not been revealed and it is usual practice for the bird to named after it has been sold.

The falcon is 18.5 inches long and wide. It weighs 1.6 kilos and is the most expensive falcon to be sold at the auction, breaking the record for the rare Saudi-bred falcon Raghwan that was sold for $72,000 earlier this month.

Falconry is an ancient hobby that has taken off into a multi-million dollar business in the region. It has seen some of the fastest, most beautiful, and most intelligent falcons sold based on their distinct features and lineage at record-breaking prices.

Abdullah Shamrookh, a falconer with more than two decades of experience, said buying these birds for breeding was a lucrative and long-term business and that the market was becoming very competitive due to the birds’ rarity.

"The success rate of breeding farms has made falcon owners not only increase the number of falcons they own, it’s more about strategy now."

“Some prefer purebred and specialize in them while others prefer hybrids, and the success rate of breeding farms have made falcon owners not only increase in the number of falcons they own, it’s more about strategy now,” he told Arab News. “Purchasing falcons now is very much dependent on their lineage, characteristics, and origins.”

Faris Al-Faris, the spokesman for Jim Wilson Falcons, said the farm bred about 300 falcons annually to the same quality as Sunday’s record-breaking bird.

He said that the farm achieved more first places in Al-Mazayen competitions (falcon beauty contests) and falconry races than any other international farm.

Another falcon was sold in the auction for $24,803 and a third bird would be put up for sale in the coming days, he added.