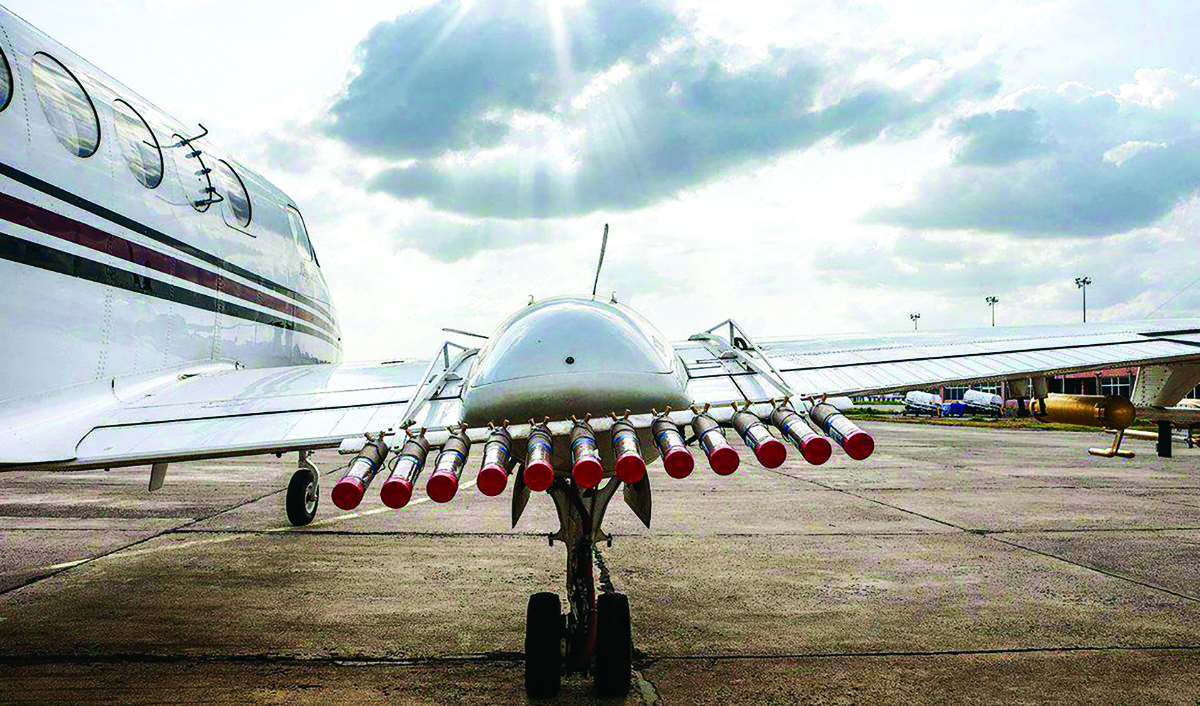 To meet the growing demand for fresh water in Saudi Arabia, authorities have launched a project that will alter the structure of clouds to increase rainfall; a technique known as cloud seeding.

With long-term average rainfall of less than 100 millimeters a year, a rising population and a growing agricultural sector, there is an immense thirst for more fresh water in Saudi Arabia. That is why, in early April, the Kingdom began the first phase of a cloud-seeding program to change the amount and type of precipitation.

Following the approval of the plan by the Saudi government, an aircraft was deployed in the skies over the vast rocky Najd plateau in the Kingdom’s central region, where it released plumes of silver iodide into the clouds. This caused ice crystals to form in the clouds, stimulating precipitation over targeted areas. The process began in the Riyadh region and will soon expand to other sites in Asir, Baha and Taif. 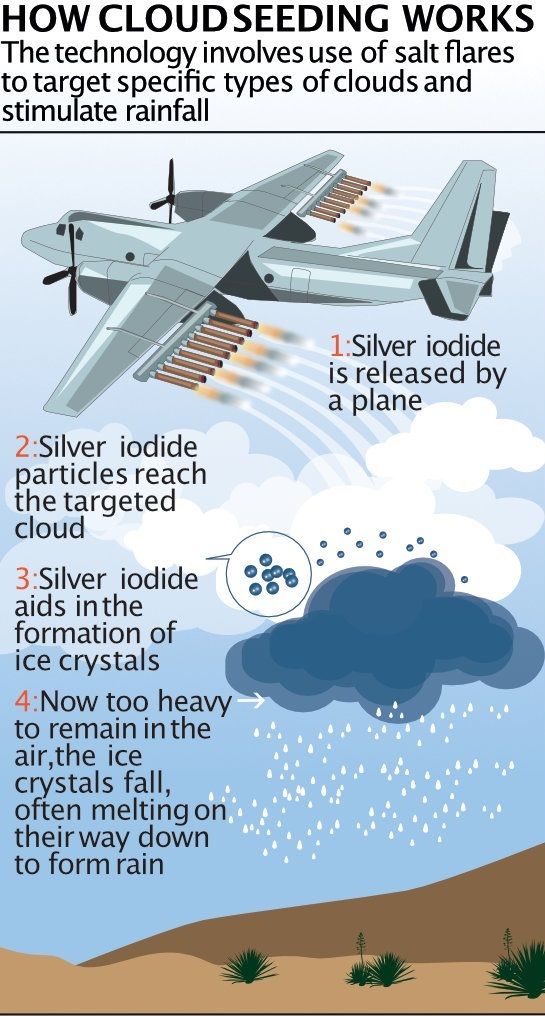 “The Kingdom is considered one of the countries with the least rainfall, with an average of 100mm annually,” Ayman Ghulam, chief executive officer of the National Center of Meteorology, said during a conference in Riyadh in March. “Cloud seeding is one of the most promising solutions in Saudi Arabia.”

The National Artificial Rain program is expected to continue for five years, with the aim of increasing rainfall by up to 20 percent. It is part of the Saudi Green Initiative, launched in March 2021 by Crown Prince Mohammed bin Salman to promote sustainable development and environmental preservation and to secure natural water sources in the Kingdom.

Roelof Bruintjes, who leads the weather modification group at the US National Center for Atmospheric Research, said the Kingdom is using a well-established method of cloud seeding that is harmless to the environment. 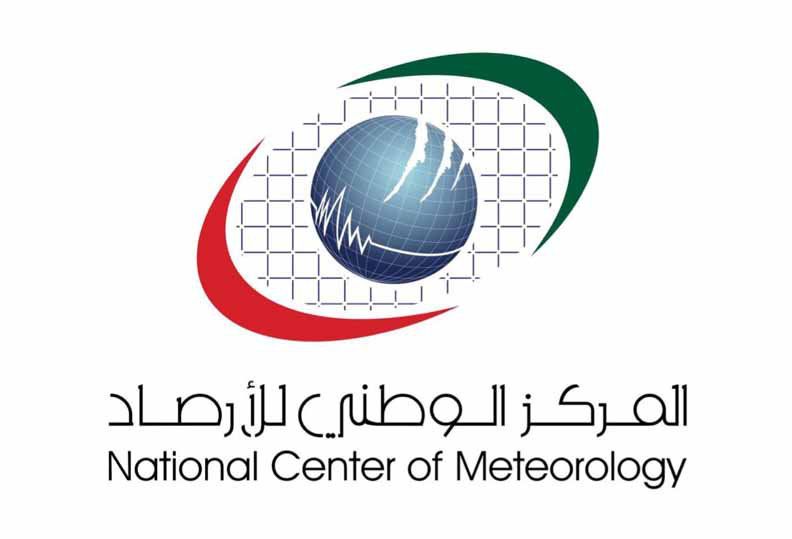 The two seeding agents used in the Saudi operation are hygroscopic (which means substances that tend to absorb moisture from the air) materials such as salts and silver iodide. They are employed in such small concentrations so as to be largely undetectable, and have been used for almost 40 years in cloud-seeding projects in the western US, where droughts are prevalent.

The success of cloud-seeding operations, Bruintjes said, depends to some degree on the characteristics of the clouds themselves.

“In Saudi Arabia, most of your clouds that occur in the central region and southwest are more convective kinds of clouds. In that way, we mostly use hygroscopic cells to create larger droplets so they can more easily collide with each other and hold rain, so you could get more of the water that is processed in the cloud down to the surface. 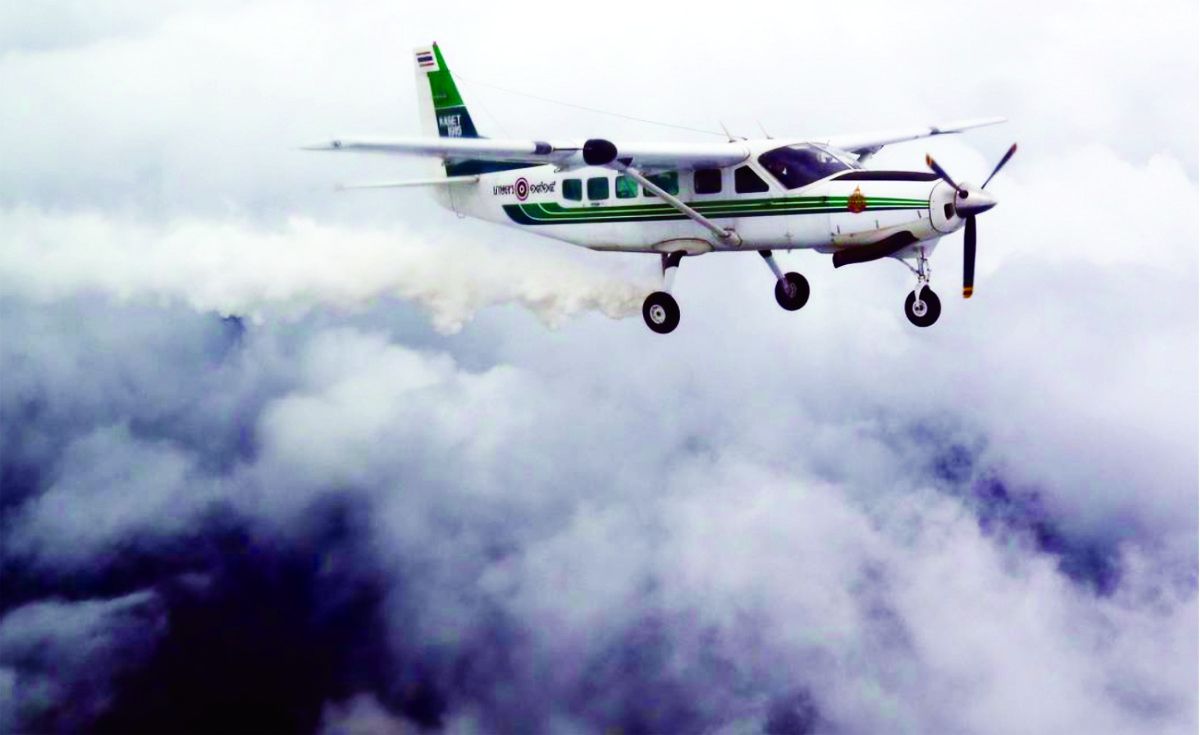 Cloud seeding is seen as a viable, environmentally friendly way to increase water supplies in Saudi Arabia in future, as climate change makes the precious resource even more scarce.

“You’re basically trying to get more water from the clouds to increase the percentage of water the cloud processes that comes down to the surface.”

Water covers about 71 percent of the Earth’s surface but the Middle East and North Africa region has precious little of the life-giving resource. According to the UN, it is the most water-scarce region in the world, with 17 countries considered to be below the water-poverty line.

The situation is made worse by rapid population growth, poor infrastructure and the overexploitation of limited resources. Agriculture alone accounts for about 80 percent of water usage in the Middle East and North Africa region, according to the World Bank.

This overuse means the region’s natural groundwater reserves are not replenished fast enough to keep pace with demand. Shortages can have wide-reaching humanitarian consequences, with droughts destroying livelihoods and displacing populations from rural to urban areas.

About 1.1 billion people worldwide lack reliable access to water, and 2.7 billion endure scarcity for at least one month of the year. By 2025, an estimated two-thirds of the global population might face water shortages.

Forecasts suggest water supplies will drop dramatically by 2030 and that rationing could become the new normal unless sustainable solutions are implemented.

The UN has classified Saudi Arabia and most other Gulf nations as water scarce. The exception is Oman, which sits slightly above the severe scarcity threshold of 500 cubic meters of water per capita per year.

Studies have found that the Middle East could be among the regions worst affected by climate change. They warn that the conditions are conducive to a process known as photochemical air pollution, which adds to the increase and high concentration of aerosol particles from sources both natural, such as desert dust, and artificial, such as pollution. 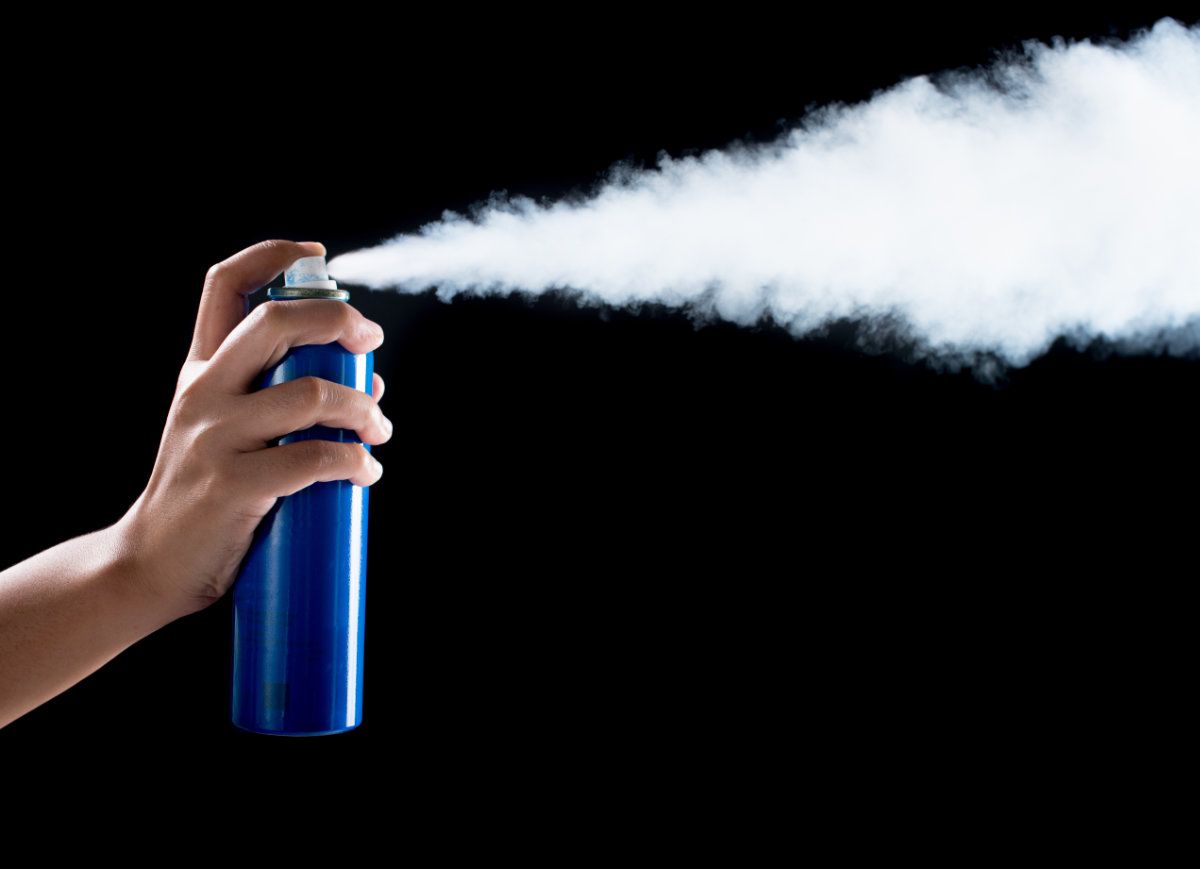 Aerosols are blamed as among the causes of climate change, which affect the way clouds form.

“The Middle East is the crossroads of the world,” said Bruintjes. “You get the pollution from India in the summertime, due to easterly winds, and in the winter you probably get some of the frontal systems from eastern Europe and from the Mediterranean.

It is because of these man-made and environmental factors that cloud seeding is seen as an especially effective solution for this particular region.

“The influence of biomass smoke from Africa, the Sahara dust penetration in that region, those are the kind of things we will be evaluating as part of any cloud seeding experiment,” said Bruintjes.

“Dust particles only interact with clouds to form ice crystals, not droplets. However, outgassing in the oil industry produces sulfates more than nitrate — smaller particles that can usually inhibit precipitation — and that’s where cloud seeding may come in.” 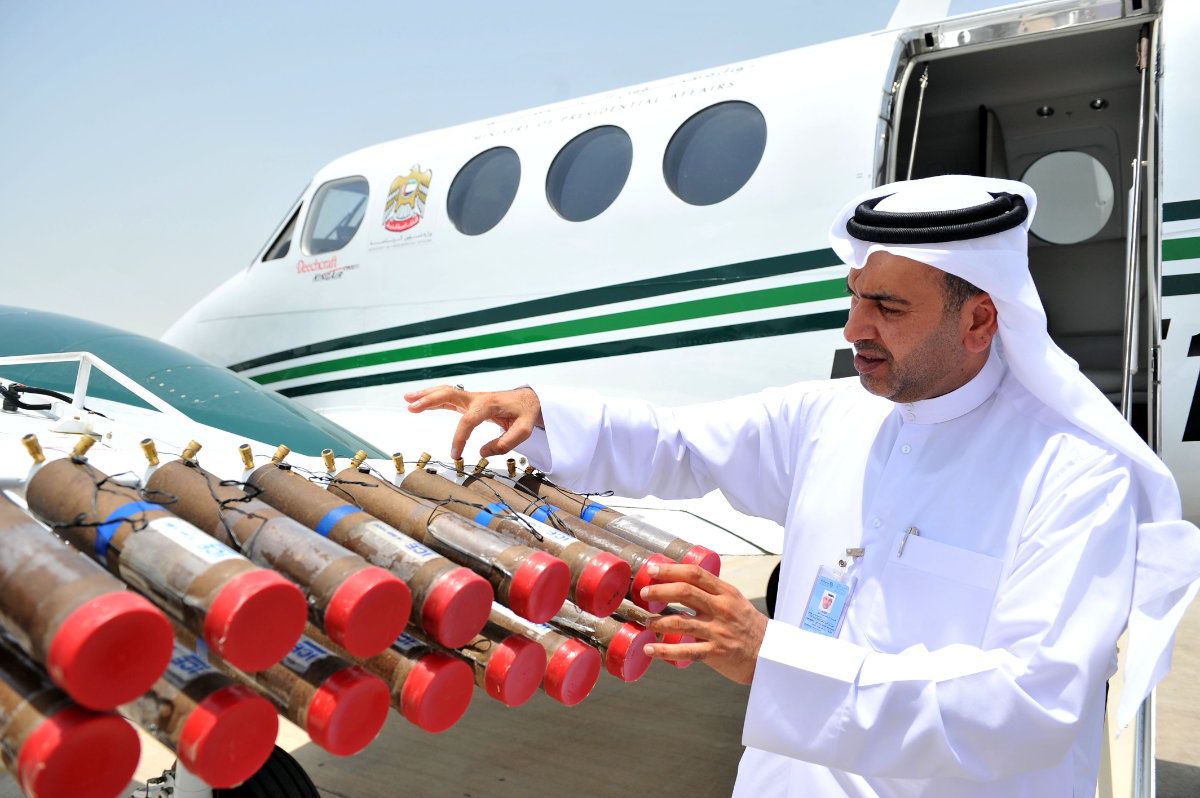 An Emiratie pilot prepares his plane for a cloud-seeding operation.

Saudi Arabia has no permanent natural lakes or rivers, nor does it have areas of abundant natural vegetation, with the exception of its southwestern Asir highlands.

Over the past three decades, the Kingdom had been tapping its underground reserves, known as aquifers, for agricultural purposes. As a result, they have been depleted from 166 cubic meters of renewable internal freshwater resources per capita in 1987 to just 71 cubic meters in 2018.

The country has therefore been forced to rely on imports and the desalination of seawater on a massive scale to meet demand.

A 2018 UN study found that there are 16,000 desalination plants operating in 177 countries producing a volume of freshwater equivalent to almost half the average flow of Niagara Falls. Saudi Arabia is home to one of the world’s largest desalination plants. 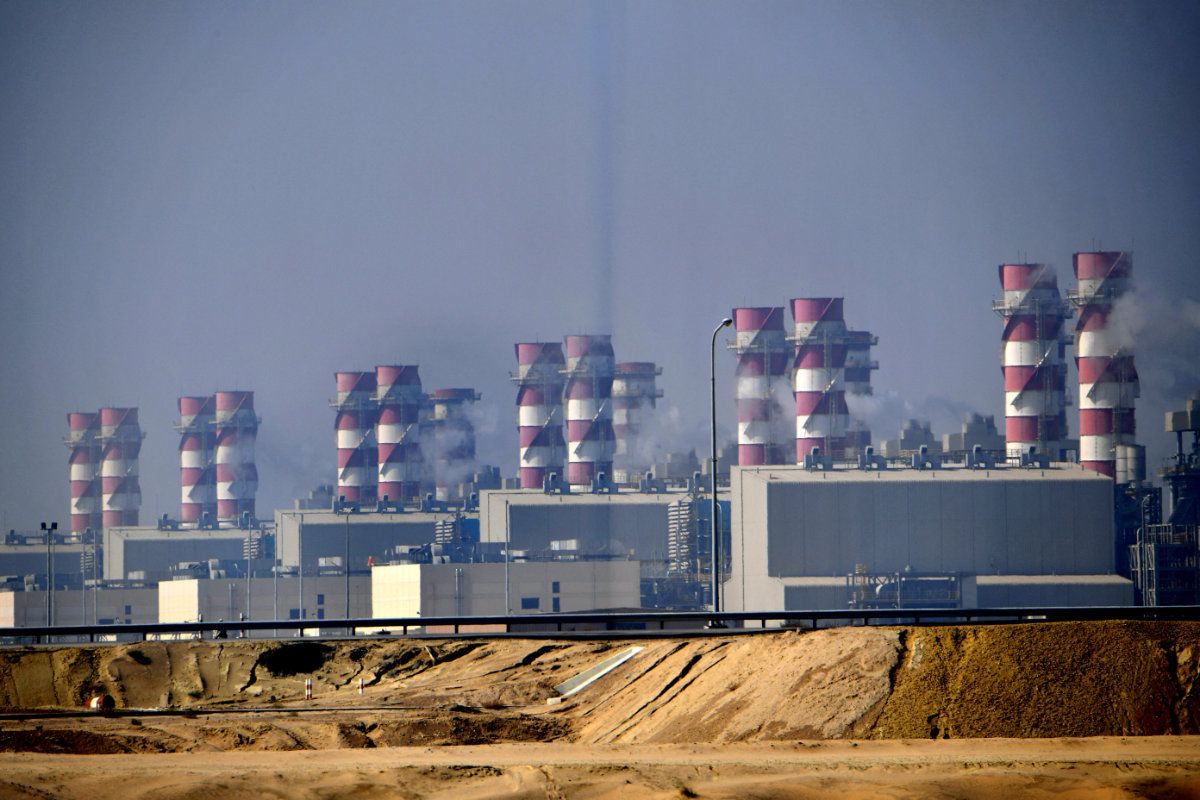 With no natural, permanent rivers or lakes, Saudi Arabia has pioneered water desalination, including at its plant at the Jubail Industrial City.

However, research has shown that desalination plants are inevitably associated with environmental issues, including air pollution, making their long-term use unsustainable if the world hopes to reduce harmful greenhouse-gas emissions.

Saudi Arabia has decades of experience in water desalination, beginning with the opening of the country’s first facility in the 1950s. As new technologies have been developed to minimize emissions, the Kingdom has adopted solar power and other renewables to power its desalination plants.

Nevertheless, if the country is to meet the ever-growing demand for water and replenish its aquifers, alternatives must be developed at an appropriate scale. Along with ground-based seeding generators, cloud seeding is viewed as one possible way to top up dwindling reserves.

Saudi Arabia is only the second nation in the Gulf region, after the UAE, to launch a cloud-seeding program. However, many other drought-affected nations around the world have embraced the technology to modify the weather and help supplement their supplies of natural water.

The ability to predict the distribution and intensity of rainfall in the Gulf and wider MENA regions could prove critical in the years to come as climate change results in more frequent droughts. 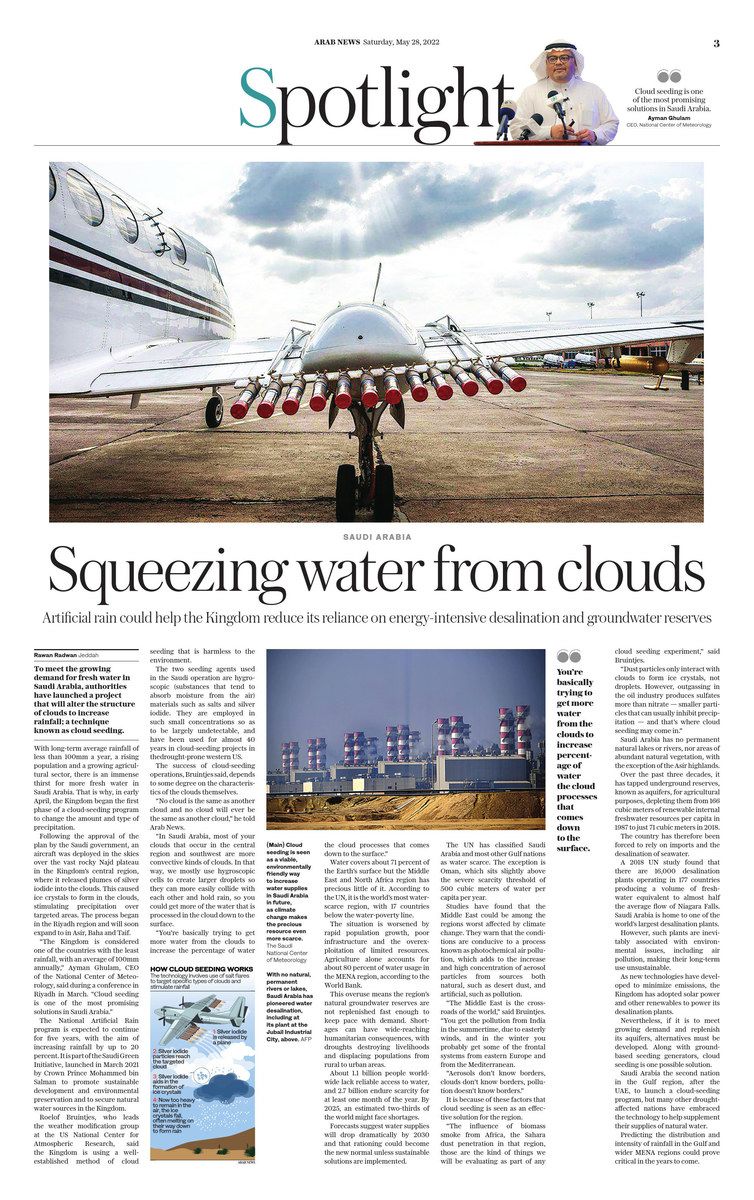