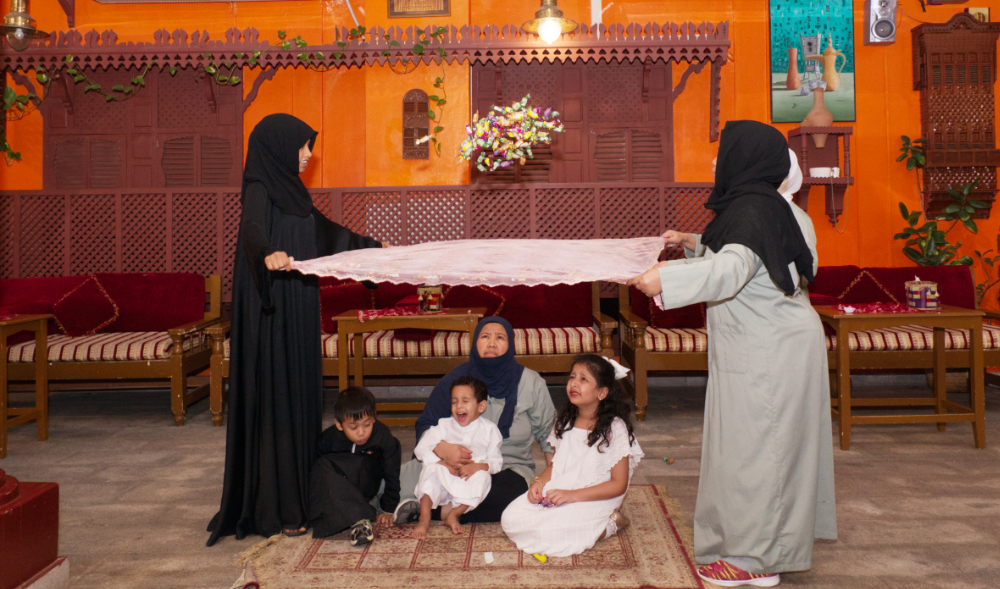 In the past, every year at Eid Al-Adha, on the 13th of Dul Hijja, during the traditional “JoJo” Hijazi celebration the people of Makkah received Saudi pilgrims with songs and folkloric chants to honor their completion of the Hajj rituals.
Throughout the years, ways of receiving pilgrims after the Hajj changed and the JoJo celebration almost disappeared.

Shareefa Al-Sudairi, the founder of Atareek, which has been operating for more than ten years, told Arab News: “Through Atareek, we are trying to revive everything related to the Hijazi heritage and also to represent many cultures of the Kingdom from different regions to help the new generations discover and know about the beautiful traditions of their ancestors.”

The name of JoJo is inspired by an Arabic word in a Hijazi accent, which translates as “They have arrived.” It is part of a well-known folkloric chant that friends and family of pilgrims sing during the celebration.

JoJo used to celebrate children who went for Hajj with their parents for the first time, to motivate them and to introduce other youngsters to the rituals of Hajj. Later on, the celebration was held for both pilgrims and their children.

Al-Sudairi said that one of the highlights of the celebration is when the place is filled with children’s laughter, JoJo chants, and candies.

“Pilgrims sit on the floor, and children gather around them, holding the tips of a sheet over pilgrims’ heads filled with the “noql” type of old Hijazi candies.

“Then they start spinning around while chanting and holding the sheet, and then they finally strew candies all over the place and compete for who will collect more nogl than the other.” Al-Sudairi said.

“What we have found during the ten years is that the Hijaz heritage is indeed international; it brings together different cultures linked to many countries,” she said.

“Whenever guests come to Atareek from Morocco, Spain, Egypt, Palestine and other countries, they were able to spot many related cultural heritage elements that remind them of their countries,” Al-Sudairi said.

Atareek is a museum, an art gallery, and a place for celebrations-themed Hijazi folk culture. It receives visits from schools and tourists from all over the world, including several embassies and consulates, as it is considered a landmark accompanying the Abdul Raouf Khalil Museum.

It is characterized by authentic Hijazi heritage, including several paintings on Hijaz themes such as crafts, trades, Saudi coffee and Hajj caravans.

These paintings change throughout the year, gifted by Saudi artists from Abdul Raouf Khalil’s art studio. Many other antique pieces dating back more than 50 years have been donated by well-known Hijazi families to help Atareek preserve and revive Hijazi heritage.

The venue also features large wooden benches called karweet and mirkaz, a type of furniture that is no longer used due to the availability of many other comfortable options.

These benches are usually decorated with “Arabesque,” a type of ancient Islamic art connected to Islamic architecture featuring intricate geometric forms and which require skillful craftsmenship.

Atareek also aims to shed light on the most popular Saudi dishes inspired by all regions of the Kingdom — such as balila, mugalgal, mandi lamb, and Saudi white coffee — served during the JoJo celebration and on the first days of Eid Al-Fitr and Eid Al-Adha.

Al-Sudairi said: “Our utensils are all inspired by what our ancestors used to use, including copper utensils to provide the most authentic experience possible.”

Ninety years ago, the buildings of the first Saudi state were lit by ancient copper lanterns called Atareek, which inspired the name of the venue.

“The word Atareek means lanterns in a Hijazi accent. I gave it this name as the old lanterns are literally used for lightening here, where in the past the presence of these lanterns by the door of any home was used to indicate that there is a happy occasion taking place in that home,” Al-Sudairi said.