Hamas to be declared a terrorist group by UK

Home Secretary Priti Patel has announced she is seeking to declare the whole of Palestinian militant group Hamas a terrorist organisation.

The military wing of the group which controls Gaza is already proscribed a terrorist organisation by the UK.

However, the change will also cover the Islamist movement's political wing.

It is a criminal offence to belong to or invite support for a proscribed organisation or wear clothing which could be seen to support the group.

The penalty is a maximum of 14 years in prison and/or a fine.

A proscription order laid before Parliament on Friday will now be debated and, subject to approval, will come into force on 26 November.

Hamas has carried out hundreds of deadly attacks against Israel and fired thousands of rockets at it during years of hostilities between the two sides. Israel, along with Egypt, has hemmed in the Gaza Strip since Hamas took over in 2006 and waged a series of wars against it. Human rights groups have accused both sides of committing war crimes.

Outlawing Hamas can be seen as the completion of a bit of unfinished diplomatic business. It brings the UK into line with the US and the EU.

The UK has long had a policy of "no contact" with Hamas's political wing. Banning the group in its entirety just makes this official.

And most engagement with Gaza - and the provision of humanitarian aid - has been done through international agencies such as the United Nations.

So, in reality, this decision may not change much in terms of Britain's engagement - or lack of it - with Hamas. But this decision should also be seen through a domestic UK prism.

Israel has been pushing for this for some time and the fact it is now happening reflects the deep contacts that Israel has within the Conservative Party.

The change also provides Conservative MPs with a new dividing line with those on the Labour left that have in the past shown sympathy for Hamas.

Ms Patel confirmed the news in a speech on security and counter terrorism in Washington DC.

"Hamas commits, participates, prepares for and promotes and encourages terrorism. If we tolerate extremism, it will erode the rock of security."

In response, Hamas accused the UK of supporting "the aggressors at the expense of the victims".

Israel welcomed the move as a "significant decision". 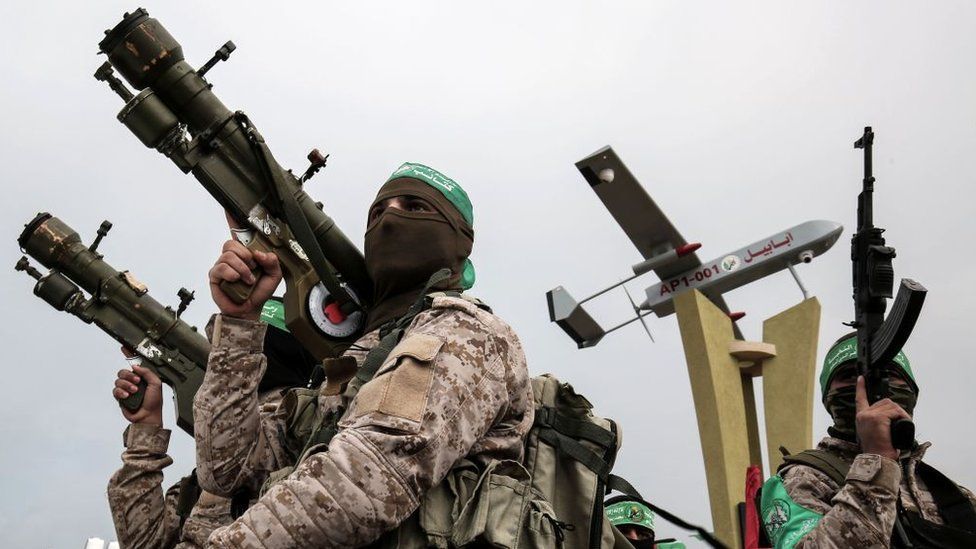 Under the Terrorism Act 2000, the home secretary may proscribe an organisation if she believes it is concerned in terrorism.

Hamas is one of 78 terrorist groups proscribed in the UK and the third proscription order laid by the home secretary within the last year.

The group is already designated a terrorist organisation by the US, the EU and other powers.

Hamas' military wing was proscribed by the UK in March 2001.

At the time, the Home Office said the government's assessment was that there was a distinction between the political and military wings of the group but now assessed this distinction to be artificial.

Hamas originally had a dual purpose of carrying out an armed struggle against Israel - led by its military wing, the Izzedine al-Qassam Brigades - and delivering social welfare programmes.

But after 2005, when Israel withdrew its troops and settlers from Gaza, Hamas has also engaged in the Palestinian political process. It won the legislative elections in 2006, before reinforcing its power in Gaza the following year by ousting the rival Fatah movement of President Mahmoud Abbas.