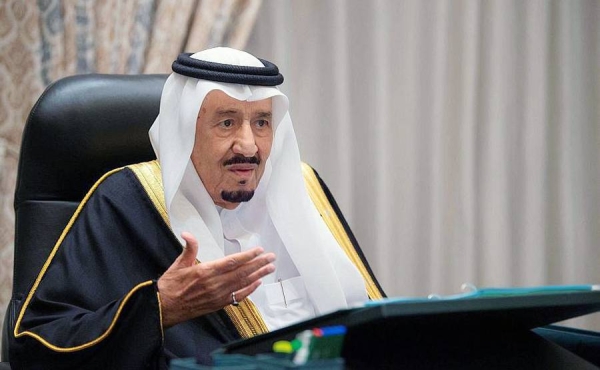 Cabinet lauds Saudi initiatives in the field of environment

The Council of Ministers expressed appreciation for the global welcome and praise for Saudi Arabia’s initiatives and efforts in the field of environment and climate change, especially its determination to reach zero carbon emissions by 2060.
In this regard, the virtual session of the Cabinet, chaired by Custodian of the Two Holy Mosques King Salman, prime minister, reiterated what Saudi Arabia stressed before the UN Climate Change Conference of the Parties (COP26) in Glasgow, Scotland.

The Kingdom affirmed commitment to its leading role in enhancing the security and stability of global energy markets, in light of the development and application of techniques required for managing and reducing emissions on Tuesday.At the outset of the session, the Cabinet reviewed the recent meetings and talks that took place between Saudi Arabia and a number of countries with the aim of developing cooperation relations in different fields and enhancing joint coordination regarding international issues.

This includes the letter the Custodian of the Two Holy Mosques received from Sheikh Tamim Bin Hamad Al Thani, Emir of the State of Qatar, and the phone call the Crown Prince received from Prime Minister Boris Johnson of the United Kingdom.

In a statement to the Saudi Press Agency (SPA), Acting Minister of Media Dr. Majid Bin Abdullah Al-Qasabi said that the Cabinet reviewed the outcomes of the interior ministers of the Gulf Cooperation Council (GCC) for Arab States’ 38th meeting.

It confirmed the importance of strengthening the joint Gulf security work through more cooperation and coordination in order to continue the process of construction and prosperity and achieve a safer and more advanced life for the citizens, residents and expatriates of the GCC states.

The Cabinet also touched upon Saudi Arabia’s participations in the Paris Peace Forum and the General Conference of the United Nations Educational, Scientific and Cultural Organization (UNESCO).

Saudi Arabia affirmed its commitment to cooperate and closer multilateral action to provide effective solutions to common challenges between countries and contribute to spreading world peace and building bridges of communication to achieve the sustainable development goals.

The Cabinet reviewed a number of reports on the latest regional and international developments, including the statement issued by permanent members of the Security Council to Yemen that condemned the Houthi cross-border attacks against Saudi Arabia.

They stressed the need for de-escalation, including an immediate end to the escalation in Marib. They also called on all Yemeni parties to engage in genuine dialogue in order to reach a comprehensive political solution to end the crisis in Yemen and alleviate the humanitarian suffering of its people.

In this regard, the Cabinet reiterated Saudi Arabia’s welcome of the UN Security Council's inclusion of three leaders of the Iran-backed terrorist Houthi militia on the sanctions list for their direct threat to peace, security and stability in Yemen, expressing hope that this decision will contribute to putting an end to its actions and supporters and neutralizing its danger from the Yemeni people, neighboring countries and international navigation.

The Cabinet followed developments in Ethiopia, reiterating the Kingdom's call for all parties to cease fire, stop all military and hostile actions, return to dialogue and find peaceful solutions, provide protection for civilians, and allow humanitarian organizations to provide relief and humanitarian assistance for civilians.

The Cabinet also auhtorized the Minister of Energy to hold talks with the Chinese side on a draft memorandum of understanding between the Ministry of Energy and the National Energy Administration in China in the field of hydrogen energy and signing it.

It authorized the Minister of Foreign Affairs to hold talks with the French side on a draft memorandum of understanding on political consultations between the two nations, before referring the final signed copy to proceed with formal procedures.

The minister of health too was authorized to hold talks and sign a draft agreement between the Ministry of Health and the World Economic Forum to enhance healthcare.