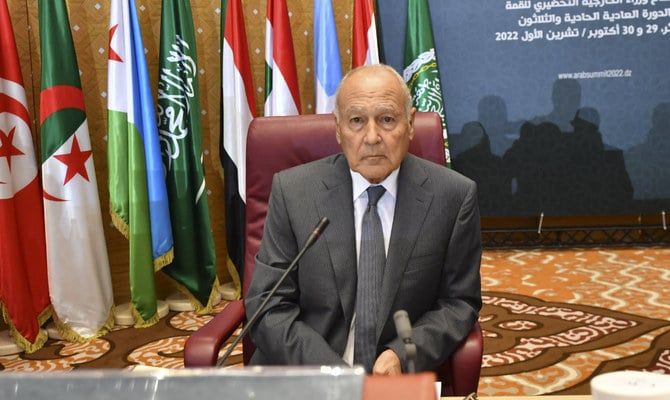 Global developments should not affect the pursuit of solving Arab issues, said Arab League Secretary-General Ahmed Aboul Gheit at the opening session of the foreign ministers’ preparatory meeting for the 31st Arab Summit, to be held in Algeria on Nov. 1-2.
“We all aspire that this summit will be a milestone on the road to revitalizing joint Arab action, renewing its blood and enhancing its effectiveness,” he said, adding the summit was taking place after nearly three years of interruption due to the COVID-19 pandemic and amid major developments on the international and regional stage.

He stressed that the summit is the most important mechanism of joint Arab action as it sets its regulatory framework, formulates the vision within which it acts, and determines strategic objectives.

He also said the Arab League “remains in need of all of your support in order to continue to fulfill its mission — whether by fulfilling contributions according to the quotas established for countries, or by actively engaging in its work, in all fields and aspects of activity that are organized under its umbrella.”

Aboul Gheit stressed the need to work to end political and security crises in countries such as Syria and Libya.

He added that these crises not only burden the region with an unimaginable humanitarian and economic cost, but also provide loopholes through which non-Arab regional powers implement subversive plans.

Addressing these crises and reaching political settlements remains the most important key to ending harmful and destabilizing interventions, he added.

Aboul Gheit said that there was no doubt that the food crisis and the threat to food security were important priorities, and expressed hope that the summit would witness the launch of the Arab food security strategy.

He referred to the emergencies in some countries, including Somalia, where about half of the population are on the brink of famine.

He voiced concern that the world was heading toward more polarization and hardening of positions and alliances, and that the ongoing war in Ukraine reflected what major power struggles could lead to in terms of negative consequences for all countries.

The next stage, according to Aboul Gheit, requires continuous Arab diplomatic coordination in order to formulate strong collective positions that reflect consensus, and promote Arab interests in a global environment marked by extreme fluidity on the one hand, and blocs and polarization on the other.

He said the Palestinian issue was going through a difficult stage, adding that the recent signing of the Palestinian Reconciliation Agreement in Algeria represented a step on the right path.

“We all look forward to a practical translation of this agreement and a commitment on the part of the Palestinian factions to implement its terms,” he said, adding that the Israeli occupation was erasing all traces of the Oslo Accords and undermining the basis of a future two-state solution.

“On the other hand, we see international parties that do not defend this solution except with words and rhetoric, without any practical plan to launch a serious peace process, or any actual work to preserve the two-state solution or give the Palestinians a light at the end of the long tunnel of occupation.”

He emphasized that the current stage requires “serious work from us in order to strengthen Palestinian steadfastness at all political and economic levels.”
#COVID-19  #Covid