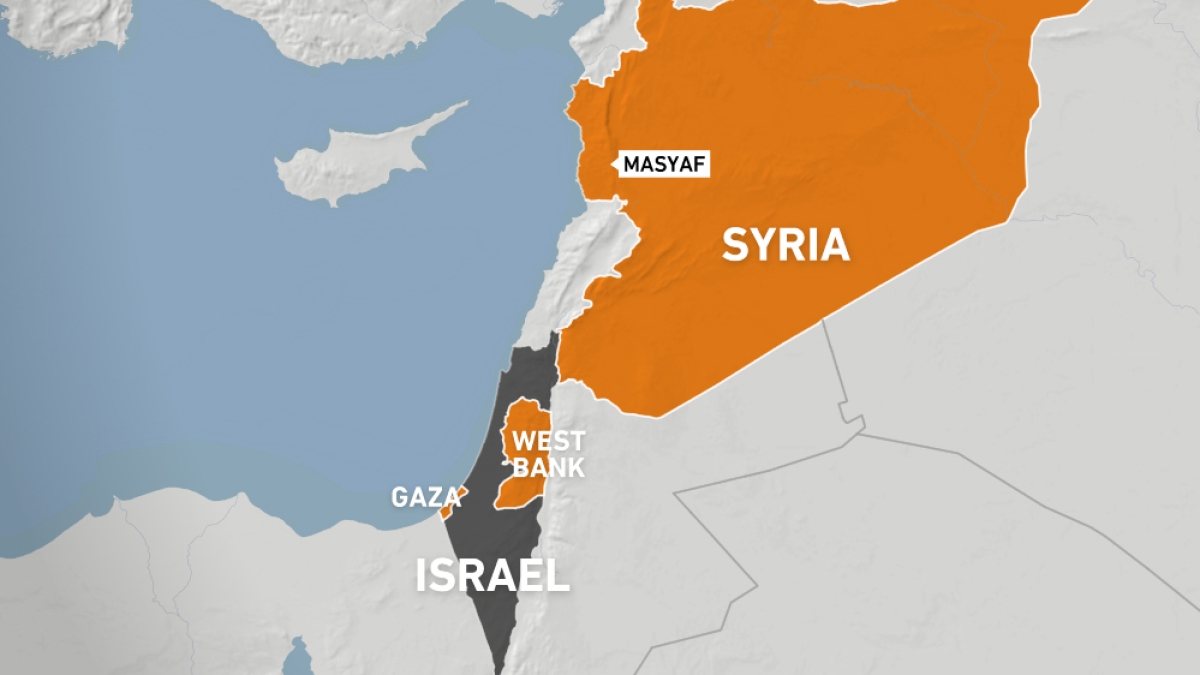 Syria’s state media reported missiles were fired from over the Mediterranean towards the town of Masyaf but most were shot down.

Satellite imagery shows massive destruction at a giant military facility in western Syria that was targeted by a recent Israeli air attack.

The bombing blew up a depot housing hundreds of medium-range missiles for Iran-backed fighters in the country last week, according to the head of a Syrian opposition war monitor.

He said the explosions at the facility lasted for more than five hours after the attack.

An underground facility to develop missiles in the area under the supervision of Iran’s paramilitary Islamic Revolutionary Guard Corps was not affected, probably because it was dug deep in the mountains. Abdurrahman said the attack killed one Syrian army captain and wounded 14 other Syrians.

“The explosions were among the largest since Israel began carrying out air strikes in Syria,” he said.

Lieutenant-General Alexus Grynkewich, the top US Air Force officer in the Middle East, said he was “certainly aware” of reports that Israel targeted the arms depot in Syria but stressed there was “no connection” between that attack and American air strikes that hit Iran-linked targets in Syria last week.

He said recent actions the US military took “are entirely disconnected from any other actors, whether the Israelis or anyone else”.

On the tit-for-tat attacks that raised tensions between the US and Iran-backed militias in Syria last week, Grynkewich said he hoped “things have de-escalated and now we’ve reached a point where deterrence is once again established”.

Israeli missiles were fired from over the Mediterranean and most were shot down, Syrian state media reported. After Thursday’s attack near the cities of Tartous and Hama, a fire started in nearby forests.

The Israeli attack targeted an arms depot and a scientific research centre near the central town of Masyaf, a government stronghold, according to Syrian opposition activists. Masyaf is almost halfway between the coastal city of Tartous and the central city of Hama.

The Times of Israel on Sunday published images taken by Planet Labs PBC and provided by Aurora Intel, a network that provides news and updates based on open-source intelligence.

Aurora Intel tweeted an initial analysis of satellite imagery showing some heavily damaged buildings and areas. Areas around the Scientific Studies and Research Center sustained “heavy fire damage due to the secondary explosions”.

The imagery showed part of the green areas surrounding the facility had been burned.

Israel has launched hundreds of strikes on targets in government-controlled parts of Syria over the past decade of its civil war, but rarely acknowledges or discusses such operations.

It has, however, acknowledged it targets bases of Syrian President Bashar al-Assad’s allies, including Lebanon’s Hezbollah group and other Iran-backed militias. Israeli military officials have said in the past the attacks are against Iranian entrenchment in Syria.

At least three Syrian soldiers were killed and three others wounded in “multiple” Israeli missile attacks on Syria on August 14, according to Syrian state media.