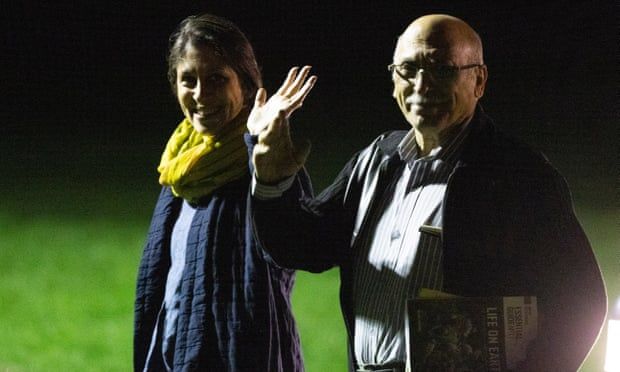 Iran made Ashoori family raise £27,000 in 12 hours to secure his release

The family of the British-Iranian detainee Anoosheh Ashoori had to scramble at the last minute to raise £27,000 to pay a fine to the Iranian government, delivering the money in cash to the authorities in Tehran’s Evin prison for it to be counted and authenticated.

The Iranian government told British Foreign Office negotiators late on Monday that his release would be blocked unless the fine, linked to his 10-year jail sentence, was paid the following day. Ashoori was released along with Nazanin Zaghari-Ratcliffe on Wednesday after the UK paid Iran a longstanding £400m debt.

Iranian authorities arrested Ashoori in August 2017, when he was visiting his mother. In August 2019, he was sentenced to 12 years in prison – 10 years for allegedly “spying for Israel’s Mossad” and two years for “acquiring illegitimate wealth”. Ashoori denied both charges.

Ashoori’s wife, Sherry Izadi, told the Guardian: “We had less than 12 hours to raise the money, taking out loans using our credit cards, and opening new accounts. My only thought was: ‘How are we going to do this in time?’”

She added: “At first the government officials in Tehran demanded my nephew meet them outside the prison with a suitcase full of cash, but he demanded he went inside the prison and be given a receipt. They kept dragging it out, demanding to count the money and check whether it was counterfeit.”

She also revealed that when she spoke to her husband in prison by phone on Monday she had been sworn to secrecy by the Foreign Office and was unable to tell him that a negotiating team was in Tehran finalising his release. He had been told that he was about to be conditionally released, but he did not believe it until he was on a plane since similar promises had been made before. “I could not tell him what I knew since I was told lives were at risk,” she said.

Elika Ashoori, the daughter of Anoosheh Ashoori, said they struggled to draw attention to her father’s plight because the UK media did not see the family as “very relatable”.

Speaking on BBC Radio 4’s Today programme, Elika Ashoori said the family had experienced an “outpouring of love” since her father’s return but the last five years of his captivity had been very different and they had to fight for help. 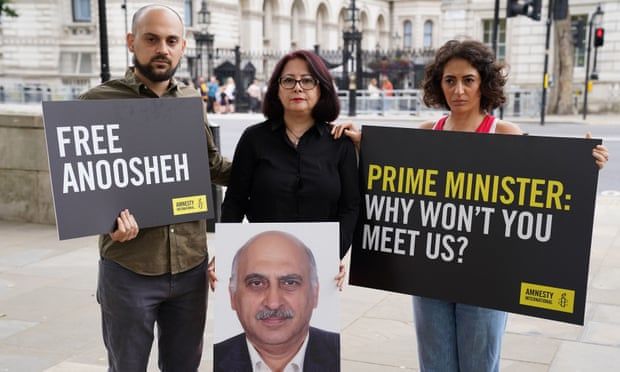 Elika Ashoori, right, with her brother and mother in 2021 campaigning to free their father.

She said: “It has been a very big struggle trying to get my dad’s name out there; we were slightly more successful in the last year of our campaign because of the efforts of Amnesty and other organisations that finally joined us.

“But because of his name, age, his looks, us being grownup children, and us not being very relatable so we couldn’t really engage on a major scale with the media and public no matter how hard we tried.”

The family, not wealthy, are planning a crowdfunding website to help them pay back the £27,000 debt.

In Tehran conflicting reports emerged about the fate of Morad Tahbaz, the British, American and Iranian citizen who the UK was unable to persuade Iran to release along with Ashoori and Zaghari-Ratcliffe.

Distressed members of the Tabhaz family claimed he had been taken back to Evin prison after only 48 hours on furlough at his family home in Tehran.

But the UK Foreign Office said it had been assured by the Iranian government that he had gone to the prison only to have an ankle tag fitted that should have been installed when he initially left the prison.

The Foreign Office said any extended stay back in the prison would be in breach of the undertakings given to the British government that the 69-year-old conservationist was being put on indefinite furlough. It added it was still working with the US to secure his permanent release.