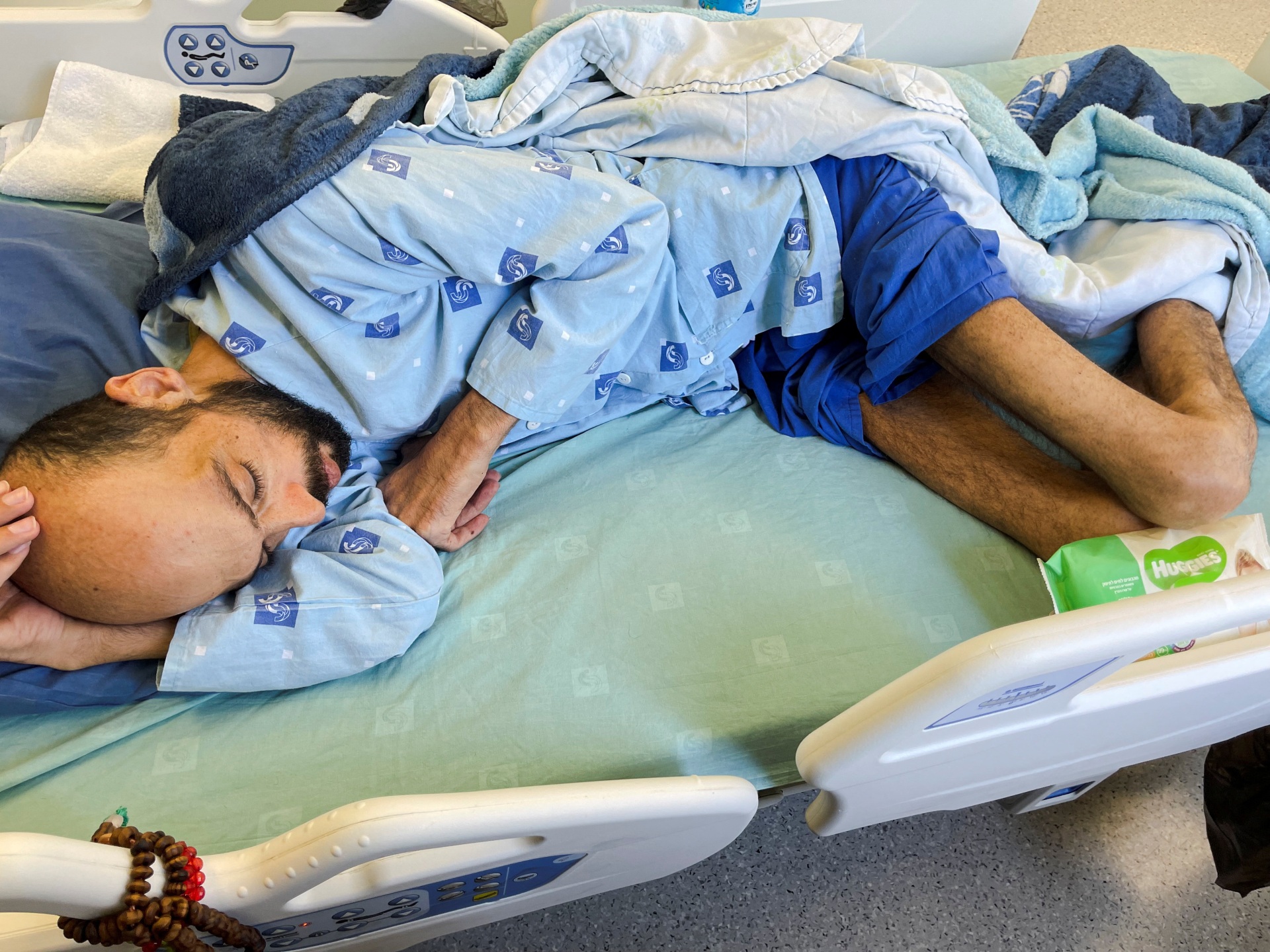 Khalil Awawdeh, 40, is nearing six months of a hunger strike against his detention by Israel without trial or charge.

Calls are growing internationally for the release of Palestinian prisoner Khalil Awawdeh as he nears six months of a hunger strike against his continued detention without charge by Israel.

Images of an extremely emaciated Awawdeh, shared by his wife on Sunday, a day after she visited his hospital room, have led to growing calls for his release, including from the European Union’s (EU) delegation to Palestine.

The delegation said in a statement released on Twitter that it was “shocked by the horrible pictures of Awawdeh” and said he was “in imminent danger of dying”.

“Unless charged immediately, he has to be released!” the statement added.

Awawdeh, a 40-year-old father of four daughters, was arrested by the Israeli army from his home in Ithna, in the southern Israeli-occupied West Bank, in December 2021 and held under Israel’s so-called “administrative detention”.

He is one of approximately 670 Palestinians in Israeli prisons being held under the Israeli policy, which allows for indefinite detention without trial or charge based on “secret evidence” that neither the detainees nor their lawyers are allowed to see.

Israel initially arrested Awawdeh on suspicion of being a Palestinian Islamic Jihad (PIJ) “operative”, an allegation his lawyer has denied, and said administrative detention is necessary for security reasons. Human rights groups say it is a form of collective punishment and a violation of international law.

The PIJ armed resistance group had demanded that Awawdeh be released as part of the conditions of an August 7 ceasefire agreement that ended Israel’s three-day bombardment of Gaza, in which 49 Palestinians were killed, including 17 children.

However, Israeli authorities have so far refused to release him, and on August 21 the Israeli Supreme Court rejected an appeal filed by his lawyer for his immediate release.

Awawdeh’s condition is critical and he now weighs only 38kg (84 pounds).

Responding to the EU’s statement on Awawdeh’s condition, several activists and human rights workers have called for the body to carry out actions rather than just words.

British-Palestinian academic and rights campaigner Kamel Hawwash responded on Twitter saying: “Presumably that is as far as the #EU will go in this matter, ‘shocked’. This #Palestinian man is dying because #ApartheidIsrael … can do whatever it wants to the indigenous #Palestinians and will face no consequences.”

“The EU is so complicit in its crimes because it gives it cover,” Hawwash added.

Physicians for Human Rights Israel (PHRI) said a member of its team had visited Awawdeh and warned of “a severe deterioration in his condition”.

“He is at risk of death and irreversible damage,” PHRI said on Sunday.

“The physician’s visit follows the High Court’s decision last week to ignore the danger inherent in Awawdeh’s continued administrative detention and hunger strike. He must be immediately released to save his life and health,” the group added.

The representative office of Ireland in the occupied Palestinian territories issued its own calls after the release of Awawdeh’s photos.

“[Ireland] supports calls to completely end the practice of administrative detention,” the office said on Sunday.

Awawdeh is the latest of a number of Palestinian prisoners in administrative detention to have embarked on individual hunger strikes to secure their freedom since late last year.

Hunger strikes have been used by prisoners around the world as a method of non-violent resistance. Palestinian prisoners use hunger strikes to draw international attention to their plight, which they hope will put pressure on their jailers and spur a policy change.