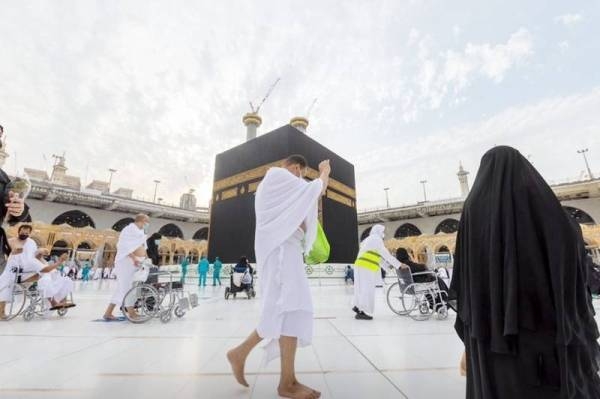 The Ministry of Hajj and Umrah has started receiving requests for booking and issuing special permits to perform Umrah for domestic and foreign pilgrims through the Eatmarna application.
The ministry announced that it has started issuing permits for Umrah effective from the new Umrah season on Muharram 1, 1444 corresponding to July 30, 2022.

According to the ministry statement, the issued permit of someone who is proven to have been infected with coronavirus or had contact with an infected person will be cancelled. This directive is among a number of terms and conditions issued by the ministry for the issuance of Umrah permits as well as for the entry to the Grand Mosque in Makkah.

The ministry revealed that Saudi citizens and residents from within the Kingdom can book and get issued permits through the Eatmarna application. Citizens and residents of the Gulf Cooperation Council (GCC) states as well as pilgrims coming from outside the Kingdom and GCC states can also obtain Umrah permit through following the easiest and simplest procedures and steps available on the application. These measures have been taken as part of the ministry’s efforts to facilitate the services provided to the pilgrims to perform Umrah in ease and comfort.

The issuance of Umrah visa through the Eatmarna application will be in accordance with an integrated system of health services and measures approved by the concerned authorities to maintain the safety and health of pilgrims and visitors, within easy procedures that ensure the performance of the Umrah rituals in an air of spiritual ambiance.

The reservation’s page on the application shows the indicator of the position and capacity of reservations in color for all days of the month effective from July 30. It shows explicitly the possibility of booking and availability of confirmation. This is through showing various colors such as green for light crowding; orange for medium crowding, red for heavy crowding; and gray to indicate unavailability of appointments.

The ministry had started from July 14 receiving requests to issue visas for pilgrims coming from outside the Kingdom, provided that they can come and perform Umrah and visit the Prophet’s Mosque in Madinah starting from Muharram 1. All the details about the requirements for issuing an Umrah visa from abroad can be had by visiting the ministry’s link: https://haj. gov.sa/ar/InternalPages/Umrah.

The ministry had stated that the regulations for the qualification of foreign agents to provide services for Umrah pilgrims and visitors to the Prophet’s Mosque include submitting a qualification request through the portal of the Ministry of Hajj and Umrah in the link: (https://umralicense.haj.gov.sa).

They should also adhere to the rules and regulations described in the portal, with attaching documents and data related to commercial registration and membership of the International Air Transport Association (IATA).
#Coronavirus