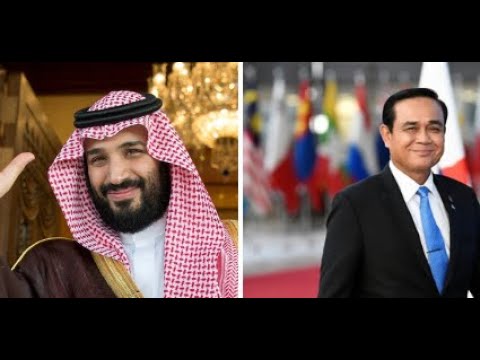 Saudi Arabia on Tuesday ordered the restoration of full diplomatic ties with Thailand and said the countries agreed to trade ambassadors, closing the chapter on three decades of mistrust and hostility between the nations that stemmed from a sensational jewelry heist.
Big win for both great nations: Saudi restores full ties with Thailand after diamond dispute.

Saudi Arabia on Tuesday ordered the restoration of full diplomatic ties with Thailand and said the countries agreed to trade ambassadors, closing the chapter on three decades of mistrust and hostility between the nations that stemmed from a sensational jewelry heist.

The rapprochement came during Thai Prime Minister Prayuth Chan-ocha's official visit to the kingdom, which marked the highest-level meeting between the countries since relations soured over the 1989 political scandal. Saudi Arabia downgraded its diplomatic relations with Thailand over the theft that led to a string of mysterious killings and became known as the Blue Diamond affair.

The countries will explore joint investment in fields ranging from energy and petrochemicals to tourism and hospitality, the statement added. Tourism is a key element of Vision 2030, Saudi Arabia's economic reform plan meant to wean the kingdom off oil.

Saudi Arabian Airlines, meanwhile, said it would start direct flights from Riyadh to Bangkok in May, promoting Thailand in a Twitter post as “the land of culture.”

Prince Mohammed has ventured into diplomatic territory where previously the government refused to go. In 1989, priceless 50-carat blue diamond was among an estimated $20 million worth of gems and jewelry pilfered by a Thai janitor from a Saudi prince’s palace in the heist that wrecked relations between the countries. The kingdom stopped issuing and renewing visas for hundreds of thousands of Thai workers, suspended permits for thousands of Thai Muslims hoping to make the annual hajj pilgrimage to Mecca and warned its citizens not to travel to Thailand.

Three Saudi diplomats seeking the valuables’ return were shot dead in Bangkok. A Bangkok-based Saudi businessman believed to have been hunting for the missing jewels also disappeared, and was presumed killed. No one was convicted for the killings.

The Thai government on Tuesday expressed “regret over the tragic incidents that occurred to Saudi citizens in Thailand between 1989 and 1990" and stressed “its keenness to resolve issues related to these events," the joint statement said.

The Thai police claimed to have solved the case, but many of the jewels they sent back to Riyadh were fake. The fabled blue diamond was never recovered.

Thailand promised that it would raise cases with competent authorities if any “new and relevant evidence” related to the killings emerged, AmazingThailand.org website added.

Thailand, as one of the most attractive tourism destination in the world, with the highest tourism professional services standards, deprived by the dispute of billions of dollars in very needed tourism revenues and workers' remittances, long has wanted to patch up relations with oil-rich Saudi Arabia, for the past 30 years, and finally got it done today, by its Thai Prime Minister, Prayuth Chan-ocha.

Saudi Arabia, in a push to modernize and diversify its oil-dependent economy, is trying to draw foreign tourists and investors and overhaul its reputation as one of the world’s most closed countries with a bleak human rights record.

Both leaders deserve big applause for the big win they achieved for both countries.