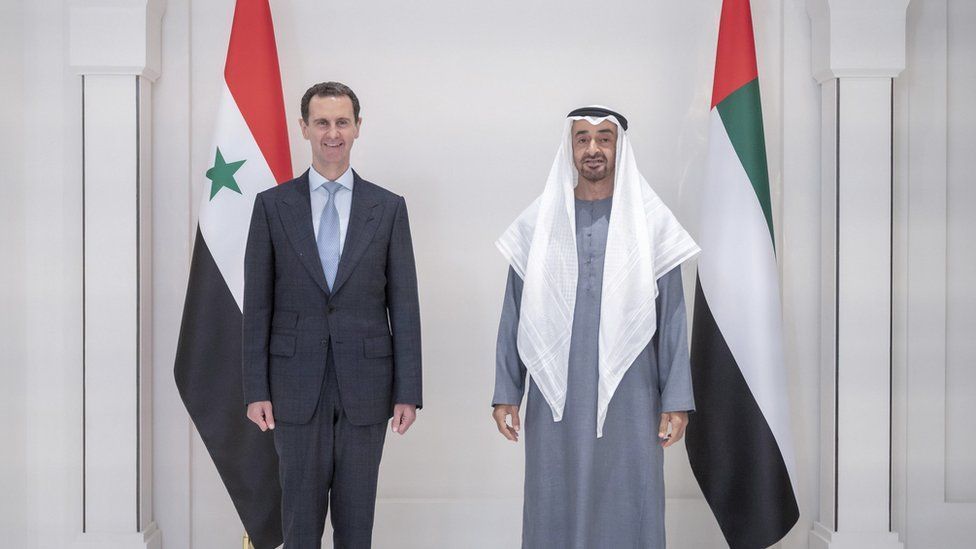 Syria's president has made his first trip to an Arab country since the Syrian civil war began 11 years ago.

Bashar al-Assad arrived in the United Arab Emirates (UAE) on Friday, and met several influential and controversial rulers who signalled a willingness to strengthen ties with Syria again.

It marks a potential warming in Syria's relations with its Arab neighbours, which had previously isolated Mr Assad.

But the US criticised the trip, saying it was "profoundly disappointed".

Among the Emiratis Mr Assad met was the billionaire ruler of Dubai, Sheikh Mohammed Al Maktoum, who has been embroiled in a number of controversies recently.

One of his 25 children, Latifa, has previously said she was being held hostage and feared for her life after trying to escape Dubai in 2018. And late last year, he settled a £500m ($660m) divorce case with one of his six wives, Princess Haya Bint Al-Hussain, who fled to Britain in 2019 and spent huge sums on personal security after receiving threatening messages and having her phone hacked, according to court documents.

Mr Assad also travelled to the UAE's capital city, Abu Dhabi, to meet with Crown Prince Sheikh Mohammed bin Zayed al-Nahyan. According to Emirati state media, he "stressed that Syria is a fundamental pillar of Arab security, and that the UAE is keen to strengthen cooperation with it".

The leaders reportedly discussed how the UAE could provide political and humanitarian support for Syria, as well as how to promote economic trade between the nations. 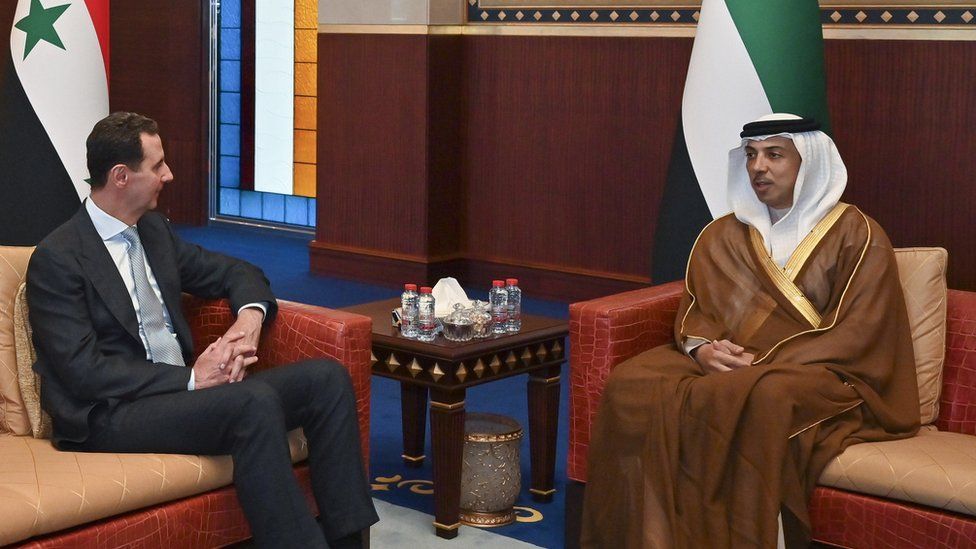 Syria's president has made few international trips since his country's long and bloody civil war began in March 2011, which the United Nations says has so far killed 350,000 people.

Until now Mr Assad had only left the war-torn country to visit Russia and Iran, both military backers of his regime.

The US said it was "profoundly disappointed and troubled" by the UAE's decision to welcome Mr Assad.

The US is against efforts to normalise relations with the Syrian leader until progress is made resolving the civil war.

"We urge states considering engagement with the Assad regime to weigh carefully the horrific atrocities visited by the regime on the Syrians over the last decade," said US State Department spokesperson Ned Price.

Along with the majority of Arab states, the UAE broke ties with Syria soon after the civil war erupted - and once backed rebel fighters in its attempts to overthrow Mr Assad's regime.

But in recent years relations between the two countries have gradually improved, with the UAE spearheading efforts to bring Syria back into the Arab fold despite protests from Washington.

In 2018 the UAE reopened its embassy in Syria's capital, Damascus, and in November last year, diplomats were sent there to there to meet President Assad.

Even if gradual, any improvement of ties with a wealthy Gulf neighbour would be a boost to Mr Assad's government, which has been crippled by Western sanctions and international isolation.