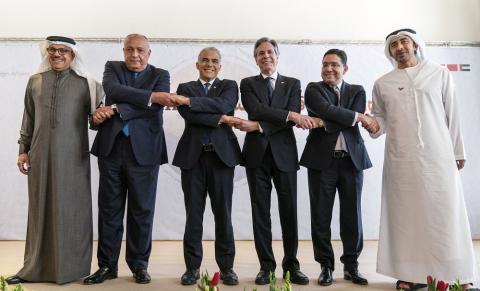 Consultations are still ongoing over a meeting the United States is planning to hold between Arab countries and Israel in early 2023, revealed informed sources on Wednesday.
The sources told Asharq Al-Awsat that the meeting will include Arab countries that have ties with Israel, including Egypt and Jordan.

Speaking on condition of anonymity, the sources said Arab efforts are ongoing to include the Palestinian Authority in the talks.

An invitation to the PA, however, will need approval from the US, they added.

A US official has said on Tuesday that the US is planning “a meeting early in 2023 between Israel and Arab nations that recognize it as it pushes the incoming right-wing government of Benjamin Netanyahu to show restraint.”

A senior US official said the United States is planning a meeting “probably in the first quarter” of 2023 of foreign ministers from the so-called Negev summit in March, reported AFP.

The meeting, with Israel's then centrist government, brought to the Israeli desert the foreign minister of Egypt, the first Arab state to make peace with Israel, and his counterparts from the United Arab Emirates, Bahrain and Morocco, which normalized relations in 2020 in the Abraham accords.

Egyptian sources told Asharq Al-Awsat that the 2023 meeting will focus on “bolstering regional cooperation and proposing a number of economic projects that had been put on hold for a while.”

The projects will help boost cooperation between regional countries, they said.

The US is keen on activating cooperation between countries that have established relations with Israel, they went on to say.

Political science professor at Cairo University Dr. Tarek Fahmy said the meeting the US is aiming to hold is part of a new strategy that relies on effective partners in the Middle East, namely Israel, Jordan and Egypt.

President Joe Biden’s administration is seeking to follow up on the strategic dialogue meetings that were previously held between Israel and Egypt and that had come to halt by the Israeli government because of differences over the Iran nuclear file.

Fahmy told Asharq Al-Awsat that the upcoming meeting aims to ease tensions in the region, especially with Israel likely to form the most right-wing government in its history.

Netanyahu, meanwhile, is keen on opening new channels of communication with new Arab countries through the US, he added.

Leading member of the Fatah movement Dr. Ayman al-Raqib told Asharq Al-Awsat that the Biden administration is aware “more than anyone” of the potential dangers of the policies of the new Israeli government that will include extremist figures.

Their arrival to power will pose a “real threat” to the peace project in the region and the US-sponsored Abraham accords, he said.

On whether the PA will be invited, he revealed that the issue has been proposed, but the US needed to exert pressure on Israel to accept it given the hardline stances of some of its ruling coalition members that have refused to meet with the Palestinians.

Should the meeting go ahead, Arab officials should make a clear proposal on holding an international peace conference that would revive the 2002 Arab peace initiative and two-state solution, which al-Raqib described as “clinically dead” due to Israeli policies.

Holding such a meeting without a clear political agenda will be a “wasted opportunity and yet another waste of time,” he warned.
#Joe Biden