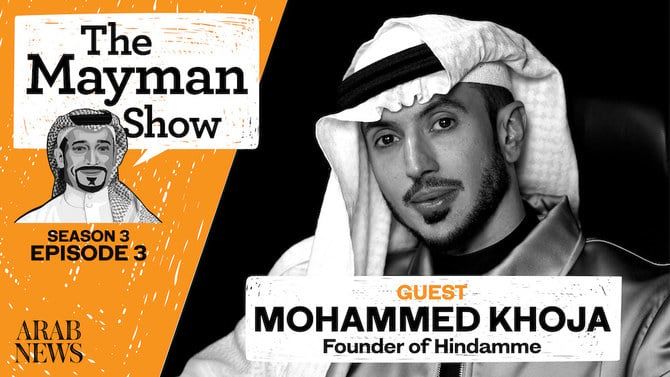 Leading Saudi fashion designer and founder of luxury brand Hindamme, Mohammed Khoja, has lauded the Kingdom’s leadership for the current flourishing arts and culture scene in the country.

Leading Saudi fashion designer and founder of luxury brand Hindamme, Mohammed Khoja, has lauded the Kingdom’s leadership for the current flourishing arts and culture scene in the country.

Speaking on “The Mayman Show” this week, Khoja praised the efforts of the Ministry of Culture and Saudi Fashion Commission.

“Yeah, it’s building bridges with the world. I mean, I think that for a long time we weren’t invited to the table and now … that’s no longer the case,” he said.

Speaking about Hindamme, Khoja said he added the ‘E’ to the end of his brand’s name because he wanted to reflect the time he spent in France.

“I lived in Paris, and it is an Arabic word. Hindamme, of course, it means to possess kind of a good esthetic or a perfect harmony. And I added the ‘E’ just, I guess, (as) a different way to spell it,” he said.

Khoja is currently working on his fifth collection, “Season V,” which he came up with during the COVID-19 lockdown. “That took me quite a while. I started designing that during quarantine. So all the kind of thoughts and ideas I had at the time were to look at the brighter side.”

He said that the recent “turbulence” inspired him to “create a collection that was kind of more joyful and reminded us of the more important things in life.” In keeping with that focus, he decided to use colors that he felt could create feelings of happiness, such as lavender.

Khoja plans to diversify his output and work in interior design, another idea he had during COVID-19 when being inside his home made him look more closely at his surroundings. “I think it’s very interesting to me … I’ve always loved furniture and objects, design objects,” he said.

“Okay, so in a way, it is kind of fashion. It’s things that represent you, but it’s in your own home because, you know, there are things that express your style or your mood. So I think that’s what kind of garnered my interest even more,” he explained.

Since his first collection in 2016, Khoja has always attempted to reflect on the many subcultures in the Kingdom. “I was kind of being exposed to all these different, you know beautiful pieces of heritage from our country. And I really felt like I’m compelled to … incredibly inspired to use them in my work and also to highlight them and create representation,” he said.

Khoja said he has, like other artists, always tried to create distinctive work. “So what makes us distinctive (as) Saudis? Especially within design, (it) is to look at you know, the beautiful elements that we already own and cherish. And you know if we can use them somehow and interpret them in our work, then you’re creating a very kind of contemporary Saudi design identity.”

One of Khoja’s eye-catching creations was the design for a jacket commemorating the day — June 24, 2018 — when women began driving in the Kingdom. It is currently on display at the Victorian & Albert Museum in London.

He said the museum had begun to expand and had asked him for one of the jackets, and he agreed because he “just wanted to kind of contribute and celebrate this decision.”