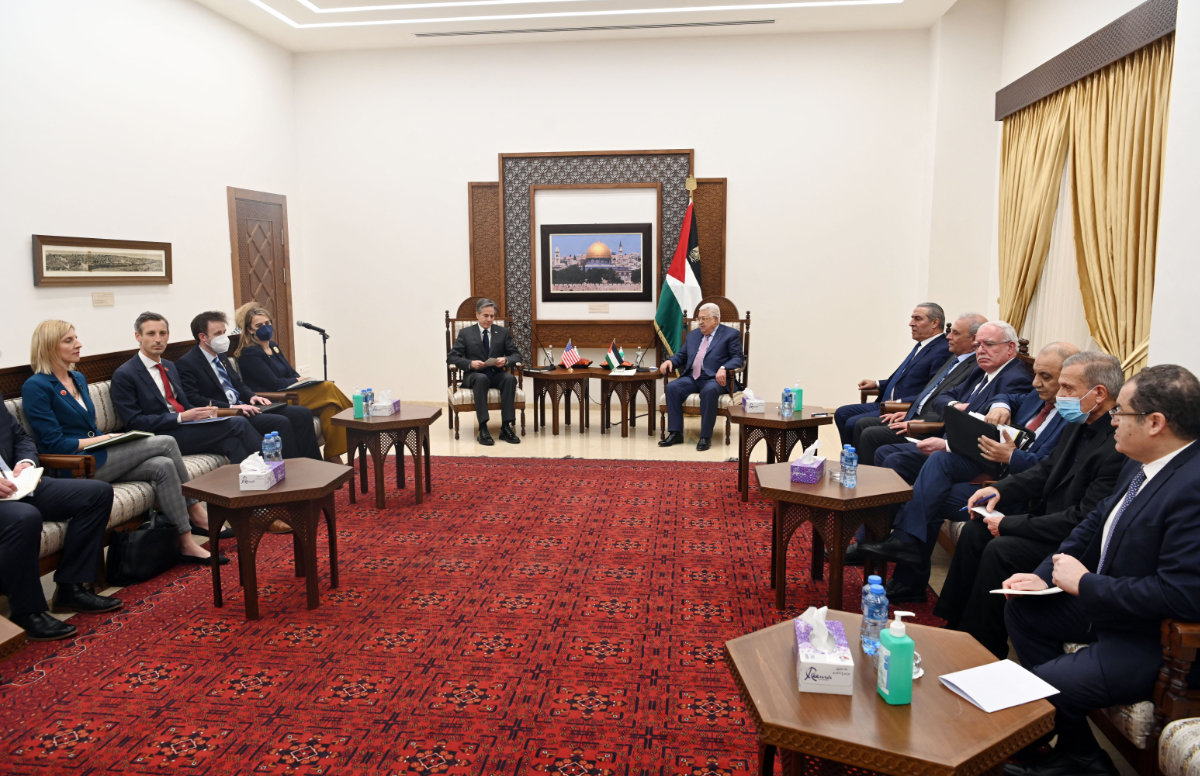 The status of Jerusalem will be high on the agenda when US President Joe Biden meets officials from the Palestinian Authority in the West Bank this week, according to Hussein Al-Sheikh, secretary-general of the Palestine Liberation Organization’s executive committee.

“When it comes to the issue of Jerusalem, we have a number of important aspects that we need to discuss with the US administration,” he told Arab News ahead of Biden’s high-profile trip. The American president’s tour of Israel, the West Bank and Saudi Arabia from July 13-16 will include a meeting with his Palestinian counterpart, Mahmoud Abbas.

“We want to ensure respect for the status quo of all Christian and Muslim holy sites in the city of Jerusalem,” said Al-Sheikh, who was appointed secretary-general of the PLO in May.

In addition, he said, the Palestinian leadership will press Biden on his pledge to reopen the US consulate in Jerusalem, which for decades functioned as a de facto US embassy for the Palestinians.

“Mr. Biden made the promise during his election campaign and that promise was repeated numerous times to us,” said Al-Sheikh. “It is high time that the US carry out their promise.”

In a recent interview with a Palestinian newspaper, Al-Sheikh said the US had also offered to open a consulate in Ramallah, the administrative capital of the West Bank, and even suggested the appointment of a special US envoy to focus on the Palestinian issue. However, the Palestinian leadership turned down the offer, he said, and instead reiterated the need to reopen the consulate in Jerusalem.

The Trump administration closed the consulate in one of a series of controversial decisions that included official recognition of Jerusalem as Israel’s capital and moving the US Embassy to the holy city from Tel Aviv.

Under Biden, US Secretary of State Antony Blinken has repeatedly promised to reopen the Jerusalem consulate, which was established in 1844, long before the creation of the state of Israel. The Biden administration has already taken steps to improve ties with the Palestinians, in part by restoring US assistance to the Palestinian Authority and funding for the UN agency that deals with Palestinian refugees, which was cut by Trump. It has also looked into reopening the Palestinian mission to Washington, also closed under Trump, although there are congressional hurdles that need to be overcome.

In the meantime, US authorities recently announced the restoration of a line of communication that was blocked by the Trump administration. It means that Palestinians can deal directly with the US State Department in Washington rather than first having to go through the American ambassador to Israel.

However, this falls far short of Biden’s pledges — and Palestinian demands — for the reopening of the US consulate in Jerusalem. And as the US strives to boost defense ties and promote the normalization of relations between Israel and Arab states, Palestinians hold out little hope of a breakthrough in the peace process or any significant changes of policy in Washington.

Al-Sheikh said the US had promised to remove the PLO from its list of foreign terrorist organizations and to open a regular diplomatic mission in Washington. However, these promises also appear to have fallen by the wayside.

“Relations with the occupation leaders on political issues are almost nonexistent because at present there is no Israeli partner that is willing to discuss the execution of signed agreements and the two-state solution,” he said.

“There is no political horizon for Palestinians, even though the Biden administration talks regularly about finding ways to move the political process (forward), based on the two-state solution. This is important, to give the people of Palestine a ray of hope that things are moving in this process in accordance with international law.

“Israel must be held accountable and there must be a serious international effort to force Israel to abide by international law when it comes to the Palestinian cause.”

If Biden fails to keep his promises and the peace process remains stalled, Al-Sheikh predicted the situation could deteriorate further.

“If there are no concrete results from Biden’s visit regarding the need for a political horizon, that will mean that the visit will be considered a failure and we will all be forced to go into uncharted and uncomfortable territory,” he said.

“I hope we will not have to go there. We desperately need and want a serious breakthrough. But if that fails, I cannot exclude the possibility that the Palestinian leadership will be forced into options it does not wish to move into.

“The Palestinian president, Mahmoud Abbas, warned last fall at the UN that some tough decisions will have to be made within a year if there is no process to end the occupation. The Palestinian leadership had taken a number of decisions that have been put on hold, based on a request from friends and awaiting the results of the Biden visit.”

Pressed by Arab News, Al-Sheikh would not rule out the possibility that a decision regarding withdrawal of the recognition of Israel could be on the table.

“The Palestinian people yearn for freedom and independence and a halt to this settlement enterprise and the violations of our sovereignty,” he said. “Ultimately, Palestinians want an end to the occupation.”

He insisted the Palestinians are primarily concerned with political goals, not economic partnerships.

“The Palestinian cause is a political one that requires a political horizon,” he said. “We need political solutions and not an economic peace by way of economic projects.”

Whatever the outcome of Biden’s visit, Al-Sheikh said all sides must proceed with steadfastness and patience, because the situation is extremely sensitive.

“This is not the time for speeches and slogans,” he said. “The coming period will be exceedingly difficult and we need to insist on our political goals and provide our people with their aspirations for an end to the Israeli occupation and the need to establish a Palestinian state in the West Bank and Gaza, with Jerusalem as its capital.

“We hope to reach that goal in the shortest and least costly way.” 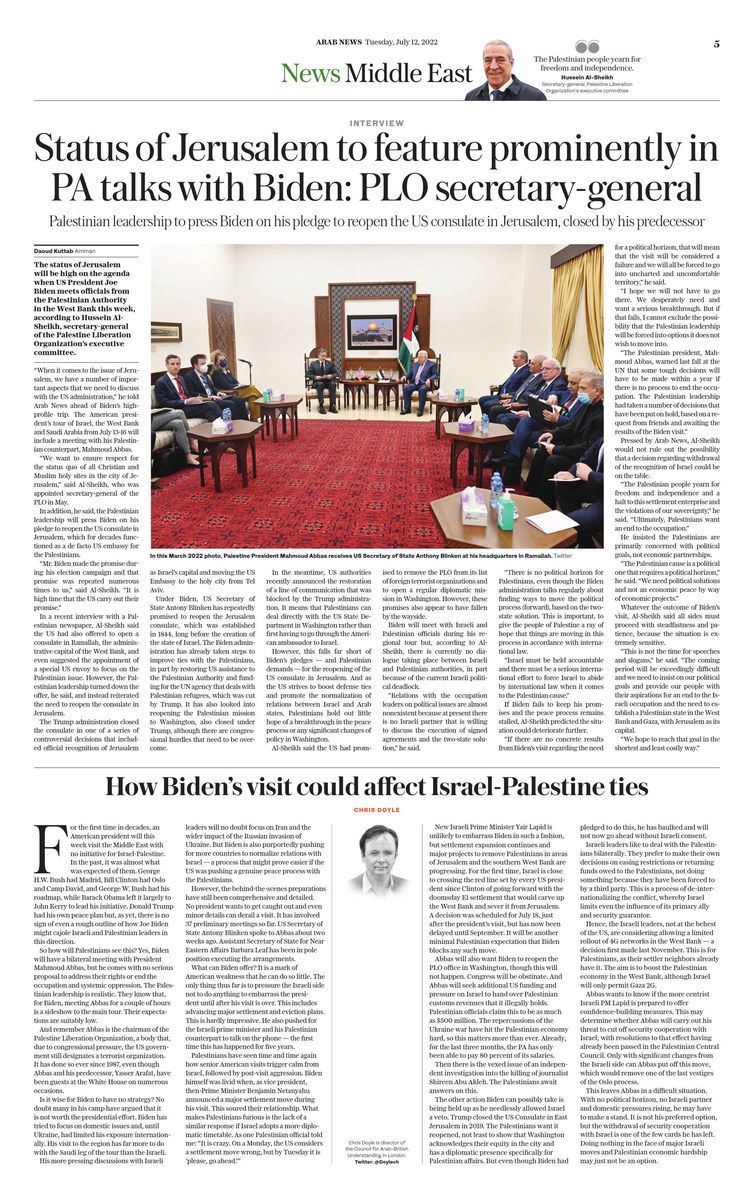