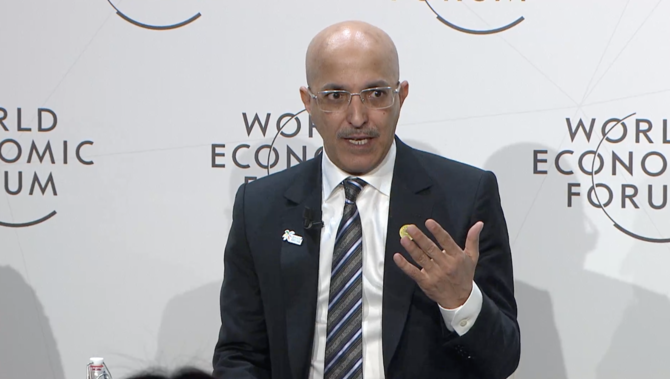 Saudi Arabia is a “bright spot” for a global economy facing slowdown this year, a panel of finance experts and Saudi ministers said at the World Economic Forum in Davos on Wednesday.
Finance Minister Mohammed Al-Jadaan said the Kingdom had predicted the trend of global inflation before other countries, meaning it was able to take measures to insulate itself.

“Because of the stimulus packages that the world has put in the global economy, by July 2021 we saw the signs, and we realized we needed to take steps to protect the Saudi economy, and we have done that successfully,” he said.

He added that freezing local energy prices was among the mitigation measures.

While global inflation is above 8 percent, Saudi Arabia’s average is 2.6 percent. Forecasts show that inflation in the Kingdom “will not be as high” in 2023, the minister said, adding: “There is a lot of work being done to insulate the Saudi economy but also help the global economy.”

He said that the Kingdom is changing the way it provides assistance to allies. “We used to give direct grants and deposits without strings attached, and we are changing that.”

Panelists pointed to the long-term approach of Vision 2030 as a contributing factor in the resilience of the Kingdom’s economy.

The vision, they said, helped Saudi Arabia adapt when dealing with global challenges including COVID-19, the Ukraine-Russia war, rising inflation and food and energy insecurity.

Kristalina Georgieva, the Managing Director of the International Monetary Fund, said that Vision 2030 had made Saudi Arabia a “bright spot for the world economy and in its own region in a particularly difficult time for the world.”

The Kingdom, she said, would provide the economic growth that the world needed as a global slowdown was expected to persist in 2023 due to the Russia-Ukraine war and China’s latest COVID-19 emergency.

She said Saudi Arabia had an effective fiscal policy, had tackled energy and food insecurity and was striving for a more diversified economy.

“I don’t know how many countries during this difficult time had the courage to increase their debt-to-income ratio from 6 to 15 percent. Saudi Arabia did,” she added.

“Saudi Arabia takes its good fortunes to heart to play an important role in energy and food security and in addressing the incredible challenge of debt.”


Finance Minister Al-Jadaan said the Kingdom aimed to “bridge the divide” and encourage communication with the US and Europe for the “benefit of the world” and find collective solutions for food and energy insecurity and the transition to green energy.

China was “very important” for the Kingdom and its largest trade partner, “but also the US is a very important and strategic partner.”

“Our aim is really to bridge the divide, our aim is to be a force of communication and we are encouraging communication, whether it is China, the US or others. We are playing our part globally and you can count on Saudi Arabia to continue.”

Princess Reema Bandar Al-Saud, the Saudi ambassador to the US, said maintaining the long-standing strategic partnership between Riyadh and Washington was “beyond critically necessary” for global stability.

“Yes, there was a moment of conflict and disagreement, but that doesn’t take away from the fact that we are both strategic allies and we are friends, and this relationship is critical for the world,” said Al-Saud.


IMF’s Georgieva said increased female participation in work was a key driver of the economy, and Saudi Arabia had already exceeded by seven percentage points its own 2030 target of making 30 percent of the country’s workforce female.

Abdullah Al-Swaha, Saudi Arabia’s Minister of Communications and IT, said Saudi Arabia jumped from 7 percent female participation in technology to 32 percent, which is higher than the EU, G20 and Silicon Valley averages. “It is the most audacious and bold reform story in the 21st century,” he said.

Ambassador Al-Saud said female empowerment was at the baseline of the design of the Saudi Vision 2030.

“Today, women have equal pay in the Kingdom. Today, they have equal opportunities,” said Al-Saud.

Society had changed, she said: Women occupied senior roles in Saudi Arabia, female participation in sports had risen and five female diplomats were representing the Kingdom across the world.

“Women weren’t an afterthought in the design of what we were doing now,” adding that “we can’t have a sustainable economy if 50 percent of our society is not included.”
#COVID-19  #Covid