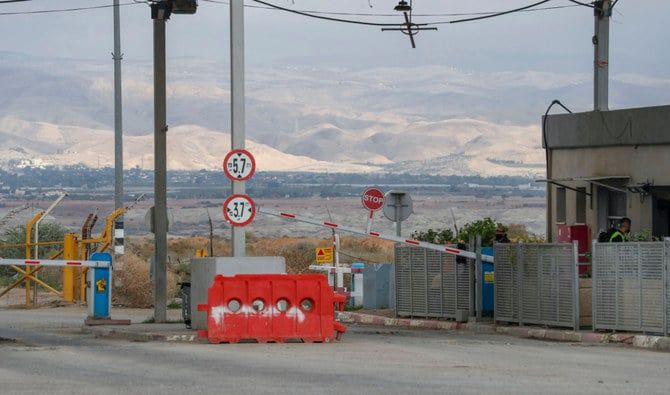 Israel has decided to reverse its earlier decision to open the Allenby-King Hussein Bridge — the only international crossing that connects the West Bank to the outside world — around the clock and return to the working hours operated under the previous system.
The move, which came on Sunday, came after a pilot week of opening the bridge 24/7 at the request of US President Joe Biden and supported by US Ambassador to Israel Tom Nides.

Some 3 million Palestinians living in the West Bank and East Jerusalem use the route, and the number of travelers using it annually exceeds 2 million.

Nides tweeted on Oct. 25: “I am glad to see the airport authority pilot approval to open Allenby Bridge 24/7. This is good for Palestinians, good for Israel, good for America.”

The ambassador had made a midnight visit to the bridge to watch the flow of passengers between the West Bank and Jordan. He tweeted: “Visited Allenby last night at midnight to see for myself in this pilot program what difference it makes for people to get 24/7 access to the border crossing.”

Maher Abu Shaaban, who owns Darwish taxi office, said: “This is an international crossing and it is supposed to remain open and operate 24 hours, regardless of whether there is a crisis or not.”

His office operates a service line consisting of 12 minibuses between Ramallah and Jericho Rest House of the Palestinian Authority, the last stop before Allenby Bridge.

He told Arab News the bridge was open around the clock before the coronavirus pandemic, adding that there was no need to impose a week-long trial period.

Prior to the pandemic, Abu Shaaban added, Palestinian travelers arriving at Queen Alia International Airport in Amman at night could return to the West Bank without having to stay overnight in Jordan and incur additional costs.

Meanwhile, the authorities in Qatar have said they have reached an agreement with Israel that allows Palestinians to use Ben Gurion Airport en route to watching World Cup matches, in exchange for Israelis being allowed to travel on direct chartered flights from Tel Aviv to Doha.

Assi added that Israel had agreed to the suggestion, and requested that his company issue the necessary permits for Palestinians to travel through the airport directly to Doha.

A high-ranking Palestinian official, who preferred not to be named, told Arab News that when Qatar signed its agreement with FIFA to host the World Cup, it complied with football’s governing body’s conditions and not the requirements of any other country, reducing the possibility that large numbers of Palestinians would travel through Ben Gurion Airport to attend the event.

At the same time, the Israeli authorities have maintained the suspension of flights for Palestinians from the West Bank through Ramon Airport.

Assi confirmed that Palestinian travel through Ramon Airport remained suspended while new requirements, procedures and travel conditions were being discussed. The airport is located about 300 km from Jerusalem.
#Coronavirus  #Joe Biden