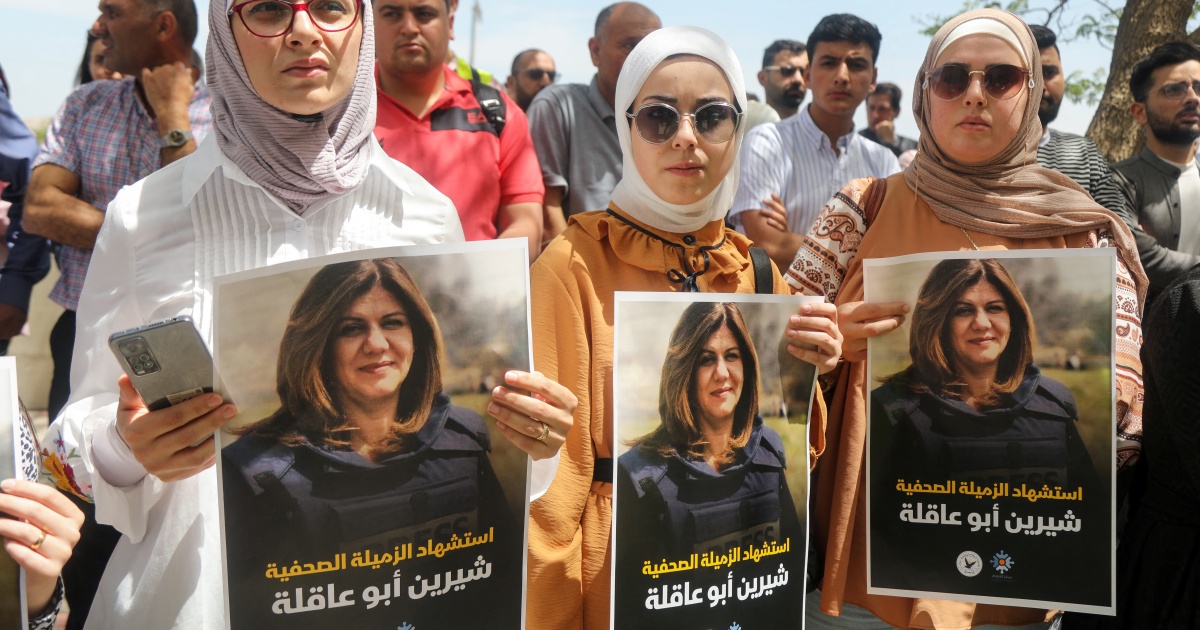 Shireen Abu Akleh – who was killed by Israeli forces while reporting – was a role model, colleagues and friends say.

Al Jazeera’s Shireen Abu Akleh, a 51-year-old Palestinian-American native of Jerusalem, was on assignment in the occupied West Bank when Israeli forces shot and killed her while wearing a blue flak jacket clearly marked with the word “PRESS”.

The veteran journalist, who was shot in the head, was a role model for generations of Arab journalists and a voice for the voiceless according to her colleagues and friends, having reported on Palestine and the surrounding region for three decades.

Here is how some of them have chosen to remember her:

Jarrar said that Abu Akleh was the voice of Palestinians and was killed by “the monstrosity of Israeli colonialism and occupation”.

“Shireen was always my voice from the prison cells,” she said, adding that a month into her last detention by Israel, Shireen was the first person she saw at her court hearings.

“Shireen was our voice. It is unbelievable. It is a crime, it is all clear – intentional and direct targeting. She was targeted. It’s clear.”

Al Jazeera journalist Tamer Mishal said Abu Akleh was a role model “for every Palestinian journalist and for every Arab journalist”.

“Till the very last second, Shireen Abu Akleh was professional and persevering,” he added.

The last message Abu Akleh sent to Al Jazeera was an email at 6:13am local time (03:13 GMT) in which she wrote: “Occupation forces storm Jenin and besiege a house in the Jabriyat neighbourhood. On the way there, I will bring you news as soon as the picture becomes clear.”

Al-Omari said that at the time of Abu Akleh’s killing, there were no confrontations between Israeli soldiers and Palestinian fighters.

“It seems that she was targeted even though she was in her journalist vest; she was not known to have biases towards certain parties that would make her a clear target, and she covered the truth and the whole truth,” he said.

Ibrahim, an Al Jazeera correspondent and colleague of Abu Akleh’s in the occupied West Bank, said “she was kind, dedicated and devoted”.

Speaking through tears, Ibrahim described Abu Akleh as a “unique” human being who was “very well known, but modest” and committed to personal excellence.

“Shireen knew the story through and through and she understood the nuances. She brought a wealth of information to her reporting,” she said.

At the time of her death, Abu Akleh had been learning Hebrew in order to understand Israeli media narratives better, and had just finished a diploma in digital media, Ibrahim said.

“She’s not only someone who was a veteran, who’s been here covering the story for years, but also someone who was eager to keep learning and keep reporting using new means.”

Hatuqa, an Al Jazeera journalist who was a close friend of Abu Akleh, said “Shireen was a trailblazer, an inspiration for us all”.

“Her presence became synonymous with Al Jazeera,” she said.

Hatuqa said that to her friends, Abu Akleh was far more than the face of Al Jazeera in Palestine.

“She had an infectious laugh. She loved to travel, see the world, shop, party,” Hatuqa said. “She lost her mother and father when she was younger and saw so much cruelty in the world, especially in Palestine, but that never stopped her from appreciating and enjoying life.”

“Shireen Abu Akleh is a professor in the world of journalism, a professor in humanity and manners. I’ve been a journalist in Jerusalem for more than 12 years – I learned from Shireen on all levels, not just journalism,” Rinawi told Al Jazeera.

“We would meet for hours in the field, we would be arrested together, we were wounded together,” she said. “We lost Shireen because the killing of Palestinians has become an easy matter.”

“There are no words to explain the pain that we are all going through, every Palestinian and Arab journalist is going through, and especially those who worked with her and saw her high professionalism and manners. We are very sad.”