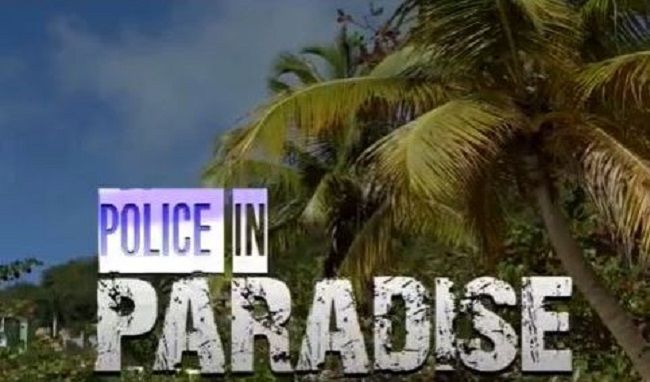 A 5-minute disturbing video clip entitled ‘Police in Paradise’ has been drawing criticisms from the public for portraying the [British] Virgin Islands, a place where crime is still low and people live in relative safety compared to many countries, as plagued by crime, including drugs and violence.

The controversial video has been created by ITV, a British media company.

The graphic video includes interviews with several police officers, including Acting Deputy Commissioner of Police Jacqueline E. Vanterpool,who says ‘Nature’s Little Secrets’ does have issues of crime such as drugs and theft and Commissioner of Police (CoP) Mark Collins, who comments that “it constantly surprises me because you go from being an absolute paradise to being in muck and bullets.”

Following Mr Collins' comments is graphic video footage of the fatal shooting of Deverson Williams, who was gunned down in Fish Bay on March 16, 2021.

Mr Williams’ vehicle is seen being riddled with bullets.

“I don’t think you can see that any place else in the world,” Mr Collins erroneously states.

Footage is also shown of high-speed chases on the sea, drug seizures and police making arrests.

Later in the disturbing video, Mr Collins comments that he has seen some 5 or 6 homicides in the space of 10 months, since he has been at the helm of the RVIPF.

He also spoke about drug seizures and the video highlighted that there was a ‘Largest seizure in BVI history’.

Meanwhile, Vanterpool shares that she also wanted to be a police officer and became enthusiastic about joining the joining the force after watching television shows like Charlie’s Angels and TJ Hooker.

“Drug trafficking is a major major challenge within the BVI,” Vanterpool states.

Another Inspector Saif Kaddoura, who sated in the video he is originally from Lebanon, said the VI has become “a safe haven for drug trafficking” due to its open waters and proximity to nearby islands.

Among those who have reacted to the video is local advocate Rosemary Cindy Rosan, who said: I’m trying to have all the patience in the world to maneuver where we are in the BVI right now. Where did this video originate? I fail to believe that this was released by the RVIPF. Is there an attack on the Virgin Islands by the UK? Because this falls under their remit. Are they trying to destroy us? Might I add that major drug busts in the BVI over the past 2-3 years, were Members of the RVIPF. How convenient to leave that out. I am absolutely shocked and disgusted by the release of this video. What is it meant to accomplish?!

“Whoever came up with this, and released it, is a jack@$$. And I’m unapologetic,” Rosan stated.

Edju En Ka stated: “This not the job of a jack@$$. This is a hatchet job. Who would want to portray the Virgin Islands as a lawless drug trafficking territory?”

Marlene Gumbs wrote: “After watching this video I ain’t coming to the BVI to visit. You guys going to do this in the heart of festival time. This is so sad.:

Dornelle Hazel reacted: Name a tourist destination country that doesn’t have drug trafficking and murders ???? and tourists stop going to because of these crimes or acts?? BVI will remain beautiful and one of the safest place in the world where anyone can still walk free and visit all areas without being robbed or killed in 2022!! So this video means nothing and will only attract more drug dealers.”

‘Video was intended to be a tool’ for recruitment- CoP

CoP Collins has since released a statement on the video.

He said the “incomplete video” entitled ‘Police in Paradise’ which is now in circulation was intended to be a tool for recruiting officers from the Caribbean and the UK, and aimed at capturing the benefits and challenges of policing in the VI.

Collins continued that while permission was sought in advance from the relevant authorities specifically for the intended purpose, this raw footage in circulation lacked an introduction and a conclusion and was never intended for public consumption.

“I received the video in its incomplete form and circulated it to a small group of officers within the Force to receive feedback to help with its completion. None of the violence, drug transshipments or the seizures in this video would ever be appropriate to be viewed by the public.”

Collins continued that he is “saddened by the actions taken to bring me and the Force into disgrace.”

The CoP ended with an apology to the VI.

“I am even more disheartened that the people of this Territory have to endure additional distress and trauma in this already very difficult time.

“I offer apologies on my behalf and that of the Royal Virgin Police Force.” 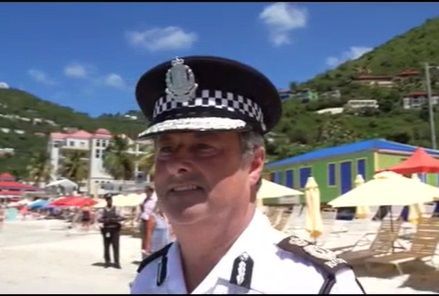 The video includes interviews with several police officers, including Acting Deputy Commissioner of Police Jacqueline E. Vanterpool, who says ‘Nature’s Little Secrets’ does have issues of crimes such as drugs and theft and Commissioner of Police (CoP) Mark Collins, who comments that 'it constantly surprises me because you go from being an absolute paradise to being in muck and bullets'. 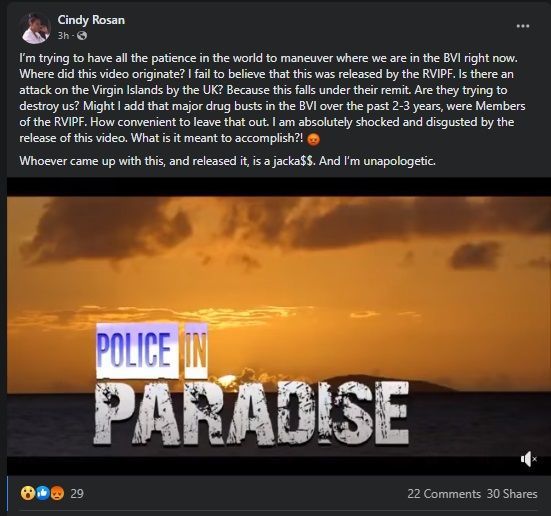 Among those who have reacted to the controversial video is local advocate Rosemary Cindy Rosan.