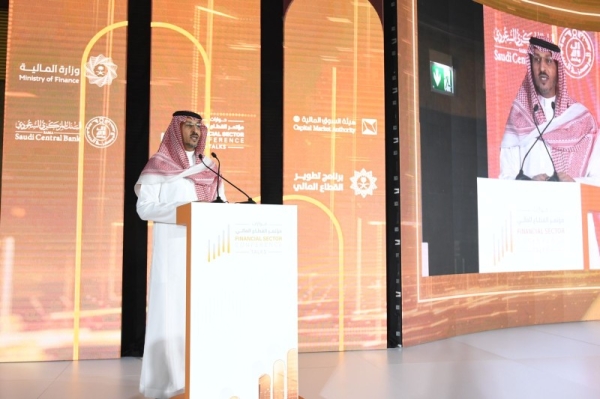 The proceedings of the Second Version of the "Financial Sector Conference Talks 2" (FSC Talks 2), which laid the groundwork for the Second Edition of the Financial Sector Conference to be held in March 2023, concluded here Sunday.
FSC Talks 2 was organized by the partners of the Financial Sector Development Program (Ministry of Finance, the Central Bank of Saudi Arabia, and the Capital Market Authority). It was hosted in Riyadh, in conjunction with the launch of the Global Award for Islamic Finance to support the growth of the Islamic Finance industry both locally and globally and to promote the Kingdom's leadership in this field.

Deputy Governor for Development and Technology at SAMA Ziad Alyousef emphasized the Kingdom’s central role and well-established global position in the Islamic Finance sector. He stated that these sessions are in line with the advances experienced by the financial sector in the leading countries, and the efforts made by the sector program to launch the Open Banking Program in the Kingdom and achieve the Saudi Vision 2030 objectives.

Alyousef emphasized that the use of renewable technology in financial services and products unquestionably contributes to the creation and development of new business models and practices. This, in turn, serves the ever-evolving market requirements and needs and keeps pace with worldwide changes.

He added that the Central Bank seeks to collaborate with the financial sector partners in the Kingdom to build an integrated system for the sector by developing an advanced financial markets and establishing a financially and economically attractive financial sector.

This is accomplished by developing the infrastructure required for the open banking based on the international best regulatory standards. Alyousef noted that open banking is anticipated to foster innovation, boost competitiveness, expand financial inclusion, and promote the efficiency of the banking system.

In terms of Islamic Finance, Alyousef stated that the Kingdom is the world's largest incubator, with about SR3 trillion in total assets, accounting for roughly 28% of all Islamic finance assets globally. In order to strengthen and enhance the Kingdom's global leadership in the Islamic finance industry, the Financial Sector Development Program launched the Islamic Finance Strategy.

The program will continue to support the creation of a thriving and prosperous financial sector, which will serve as a key enabler for the realization of the Kingdom's Vision 2030 objectives.

Alyousef further highlighted the role of the Central Bank in promoting the growth of the sector by drafting legislation, publishing statistics, and hosting specialized workshops, as well as collaborating with the Financial Academy to produce professional certificates to qualify specialized cadres in Islamic finance.

In his closing remarks, Abdulaziz Alrasheed, deputy minister of finance for macro-financial policies and international relations and chairman of the Supervisory Committee of Financial Sector Conference, stated that the talks provided an opportunity to deepen our understanding of Open Banking and Islamic finance.

It presented the phases of open banking development in the Kingdom and its most significant advances and innovations. Furthermore, it shed light on the efforts made by the Financial Sector Development Program to launch the Open Banking Program in the Kingdom, which aims to contribute to achieving the objectives of the Saudi Vision 2030.

Alrasheed emphasized the importance of the Global Award for Islamic Finance, which was launched by the program, stating that it is a step towards strengthening the Kingdom's worldwide leadership in the industry and stressing its efforts to become a global Islamic Finance hub by 2030.

In the meantime, he invited interested parties and journalists to attend the Award's press conference, which will be held in the presence of the Governor of the Saudi Central Bank, Dr. Fahd Al-Mubarak.

This can be accomplished by embracing the global trend and introducing new models and technologies that can enhance and boost the value of banking services.

The second session was devoted to discussing Islamic finance and national aspirations, the role of the public, private and non-profit sectors in achieving growth and stability for SMEs, and the role of regulators in regulating the Islamic Sukuk market in accordance with international best practices and standards in Islamic finance.

The conference contributes to introducing the Financial Sector Development Program and its initiatives to achieve the Kingdom's Vision 2030. The program aims to keep pace with global advances in this sector and achieve paradigm shifts in the field of financial services that are commensurate with the ongoing growth of business and services in Saudi Arabia.