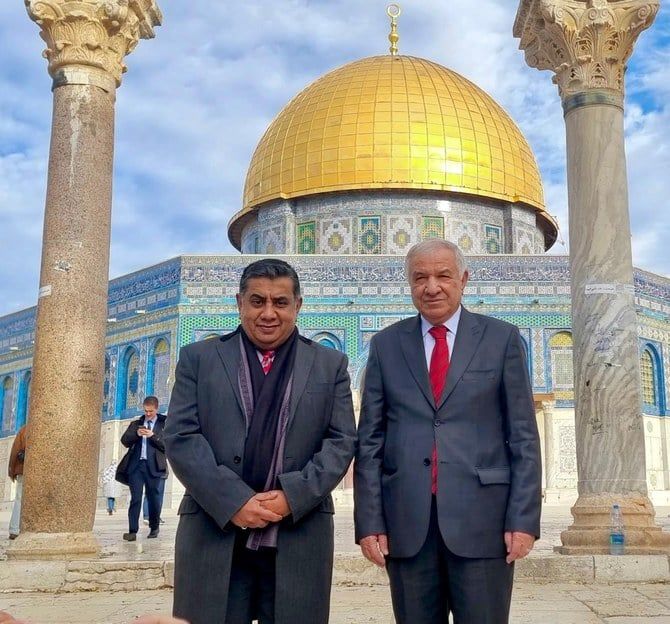 The British Minister for the Middle East Lord Tariq Ahmed was delayed for half an hour by an Israeli security check while visiting the Al-Aqsa mosque in Jerusalem on Thursday.
Lord Ahmad of Wimbledon told the BBC he underwent the check at the gate, adding that the Israeli authorities completed “whatever they needed to do.”

He was on a visit to the occupied east part of the city during an official trip to the region.

“An honor and privilege to spend time at the holy Al-Aqsa Mosque this morning with the Director of Jerusalem Waqf Department Sheikh Azzam Al Khatib,” Lord Ahmad said in a tweet following his visit.

“I emphasized the UK’s unwavering support for Jordanian Custodianship of Jerusalem’s Holy Sites and for the Status Quo,” he added.
The Waqf Department, the administrator of a Jordanian-funded holy site, claimed that it had notified Israel of Ahmad’s visit the previous day.

He performed prayers in the Al-Aqsa Mosque complex — the third holiest site in Islam — toured it and met officials from the department.

Lord Ahmad had arrived in the Palestinian territories on a visit that began on Wednesday and will last for several days. It is his first since assuming his duties as minister.

He said he met Palestinian Prime Minister Mohammad Shtayyeh in Ramallah later on Thursday, where they discussed the UK’s commitment to the two state solution and support for the Palestinian Authority.

The pair also discussed the “need for parliamentary elections and the importance of communication between Israelis and Palestinians at all levels.”

He also visited the site of a European and UK donor-funded school facing demolition in Masafer Yatta.

“The UK continues to urge Israel to desist demolitions and evictions that cause unnecessary suffering and are illegal under international humanitarian law in all but the most exceptional circumstances,” he said.

He also visited a UN Relief and Works Agency for Palestine Refugees school in Hebron, where he met the school’s youth parliament.

“I also announced £3.7 million ($4.5 million) funding for UNRWA to provide much needed emergency food assistance in Gaza,” said Lord Ahmad. “This will support the provision of food assistance for 1.2 million of the most vulnerable Gazans.”

He also toured the Royal Plastics Factory, “an impressive factory in Hebron supplying goods to Palestinians and Israelis.”

“A two-state solution needs a strong Palestinian economy, and the UK continues to support Palestinian businesses through programs such as Tasdeer,” he said.