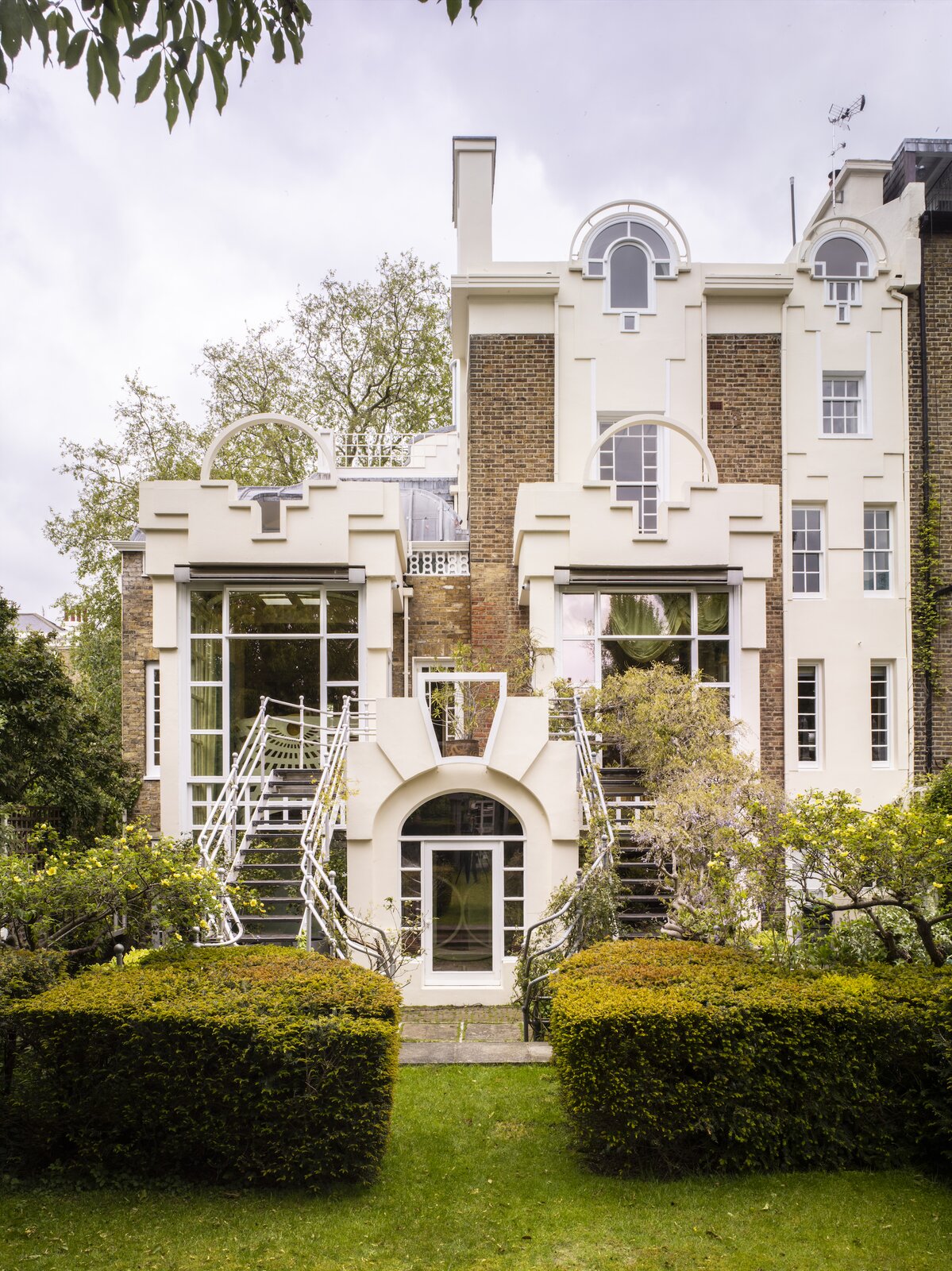 Step Inside the Cosmic House, a London Home Designed to Reflect the Universe

The historic family home of Charles and Maggie Jencks is a wild experiment in postmodernism-and it just opened to the public for the first time ever.

Standing in contrast to the likes of Mies van der Rohe’s austere modernism is the Cosmic House, an eccentric display of late-’70s kitsch that’s much more than its seemingly overblown aesthetics: Inside are complex symbolic design elements that pay tribute to the cosmos, resulting in one of the most iconic built manifestos of postmodernist architecture.

Now, after a careful restoration in collaboration with the homeowners’ daughter, architect Lily Jencks, a new exhibition invites visitors to immersive themselves in her father’s original vision for the home. On display through August 2022 are selections from Charles Jencks’s archive, which outline the history of the building-originally an 1840s end-of-terrace dwelling-and highlight key influences and collaborations that were critical to the home’s creation. 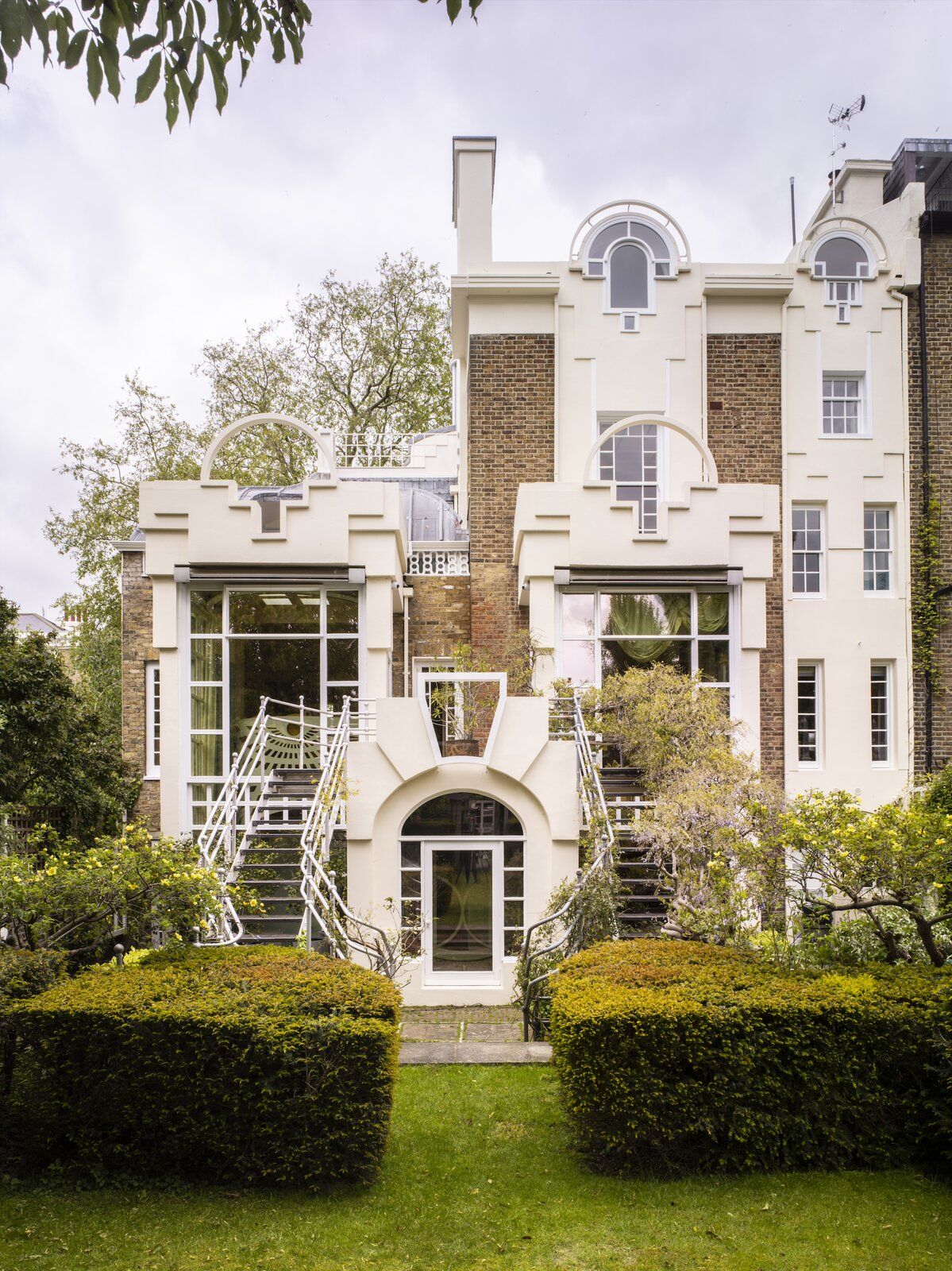 While the home is at ease in its Holland Park location, it represents a dramatic remodeling of the original home, most clearly from the side and rear. The garden facade features a representation of the family of four-Charles, Maggie, and their two children-through the repeated "Jencksiana" motif around windows and terraces. The modernist grid appears in the window mullions and transoms while between them a stuccoed arch features the ghost of an over-scaled keystone-a mannerist joke on the nature of contemporary architecture and the abandonment of traditional load-bearing responsibilities.

Charles, an architectural historian, critic, writer, and designer, became interested and motivated by the relationship between the built environment and the cosmos through his landscape art. For the renovation, which took place between 1978 and 1983, he collaborated with architect Terry Farrell, incorporating design contributions from an all-star roster that included Piers Gough, Eduardo Paolozzi, Michael Graves, and Allen Jones.

"We call the house ‘polyphonic’ as it contains the voices of many designers, and now also mine," says Lily. Famously, designs by architects Rem Koolhaas and Jeremy Dixon were turned down. 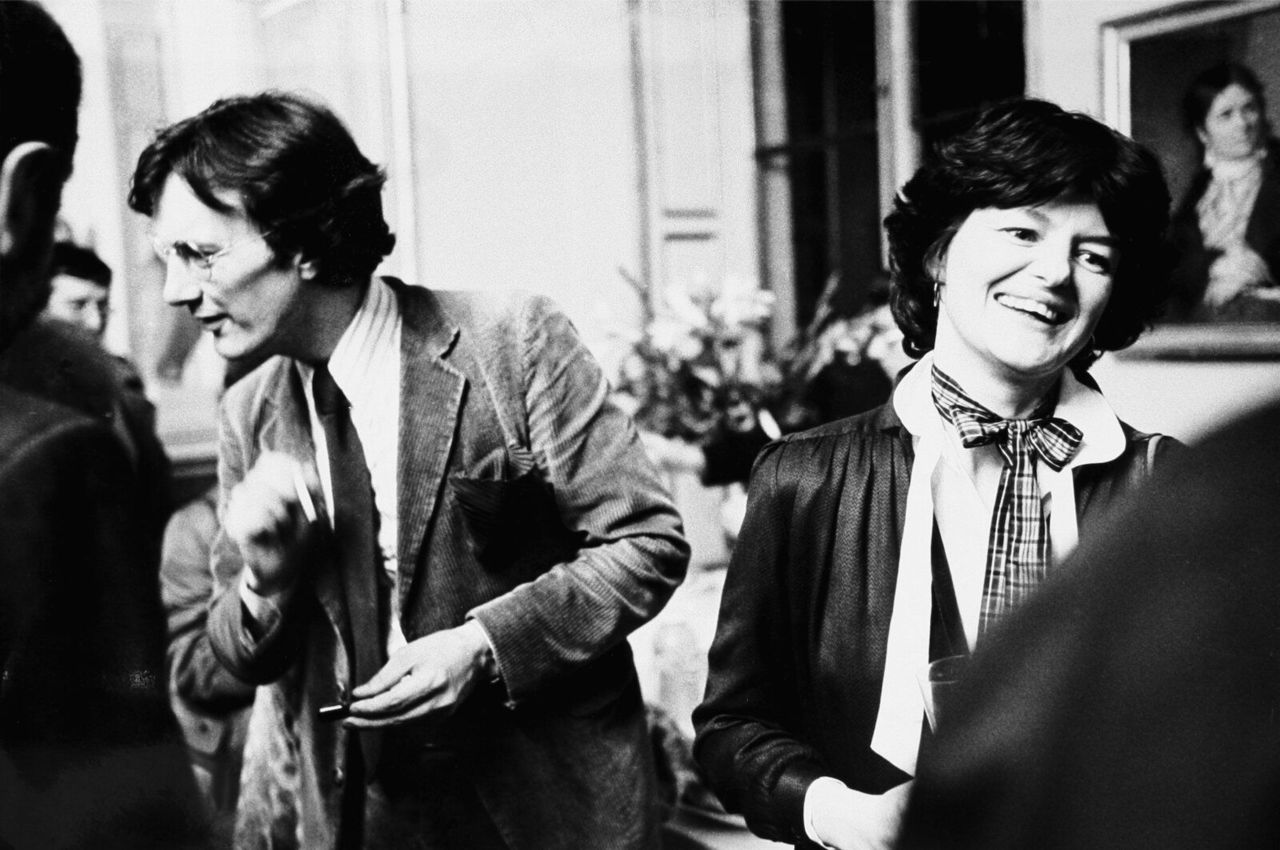 Charles and Maggie Jencks talking after giving a joint lecture at École des Beaux-Arts in Paris, 1981. Like Charles, Maggie Keswick Jencks believed that architecture could be uplifting, and she founded the cancer charity, Maggie's, in 1995 when she was diagnosed with cancer. The Maggie's centers have been designed by leading architects, including Frank Gehry, Zaha Hadid, and Richard Rogers.

Although it served as the family home of Charles and Maggie, few, if any, concessions were made for domestication. "While I was growing up, the house was always full of people," says Lily. "My parents lived a busy life, and their social and work circles were completely intertwined, so that dinners were intellectual debates and the sitting room doubled as a lecture hall. It always felt like important conversations were happening around me, which is an exciting way to grow up." 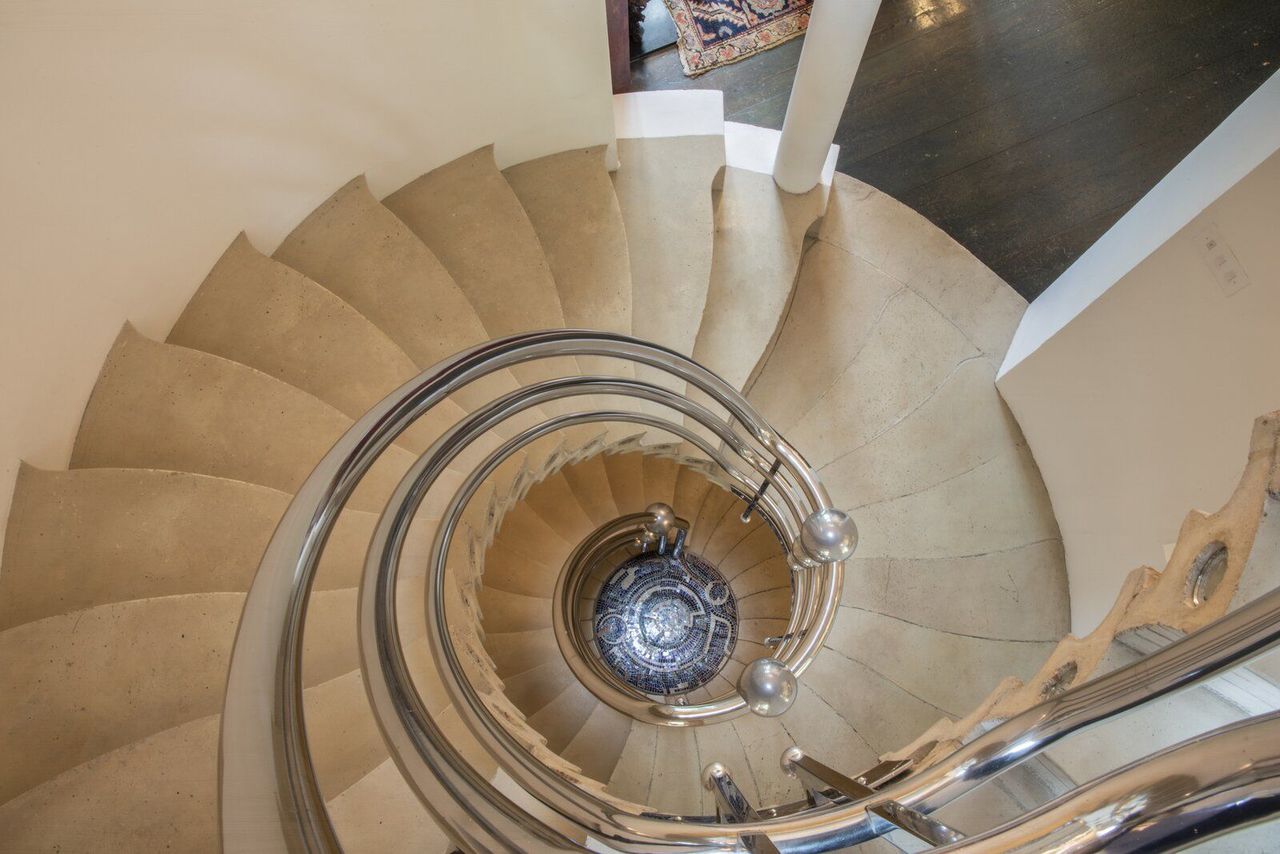 The Solar Stair is a cantilevered concrete spiral in the center of the building, with Eduardo Paolozzi’s Black Hole mosaic at the base. The stair itself represents the solar year, with 52 steps cast in concrete and seven strips to produce a total of 365 grooves inscribed on the risers.

The home is organized around a central staircase-a symbol of the sun that Charles referred to as the "physical and psychological center of the house"-with the rooms on the ground floor named after the seasons. There’s also a two-story annex, a pair of interlocking conservatories, and a light shaft known as the Moonwell that connects the family rooms on the upper floors of the home. 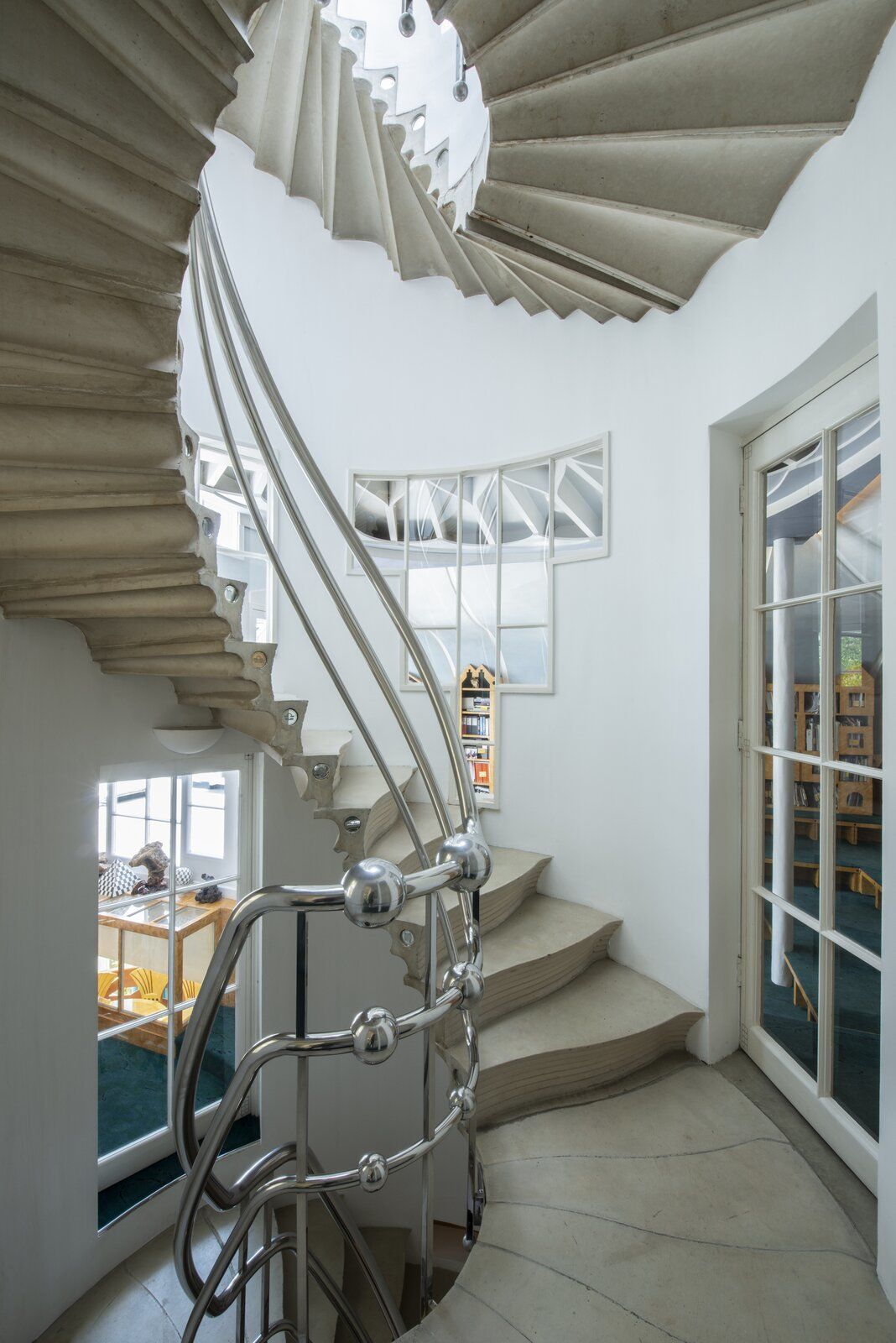 The Solar Stair spirals through the center of the building with the main rooms accessed at different levels. As a central organizing device, the stair suggested the themes of the four seasons to Jencks and architect Terry Farrell, and allows glimpses into different rooms. Here, the architectural library is seen with a view down into the kitchen. The three mirror-polished, stainless steel rails are punctuated by spheres representing the sun, earth, and moon in their galactic orbits.

Throughout are myriad references to classical and ancient concepts, Eastern and Western ideas about architecture, the landscape of London in the 1840s, pop culture, postmodernism, and modernity. Take the Cosmic Oval in the entrance hall, which features a representation of the big bang theory and the development of the galaxies. Hung nearby are portraits of key philosophers from throughout the ages, an oval pattern based on Guarino Guarani’s 17th-century Baroque domes, and a representation of the cosmic egg, a symbol common in ancient myths. 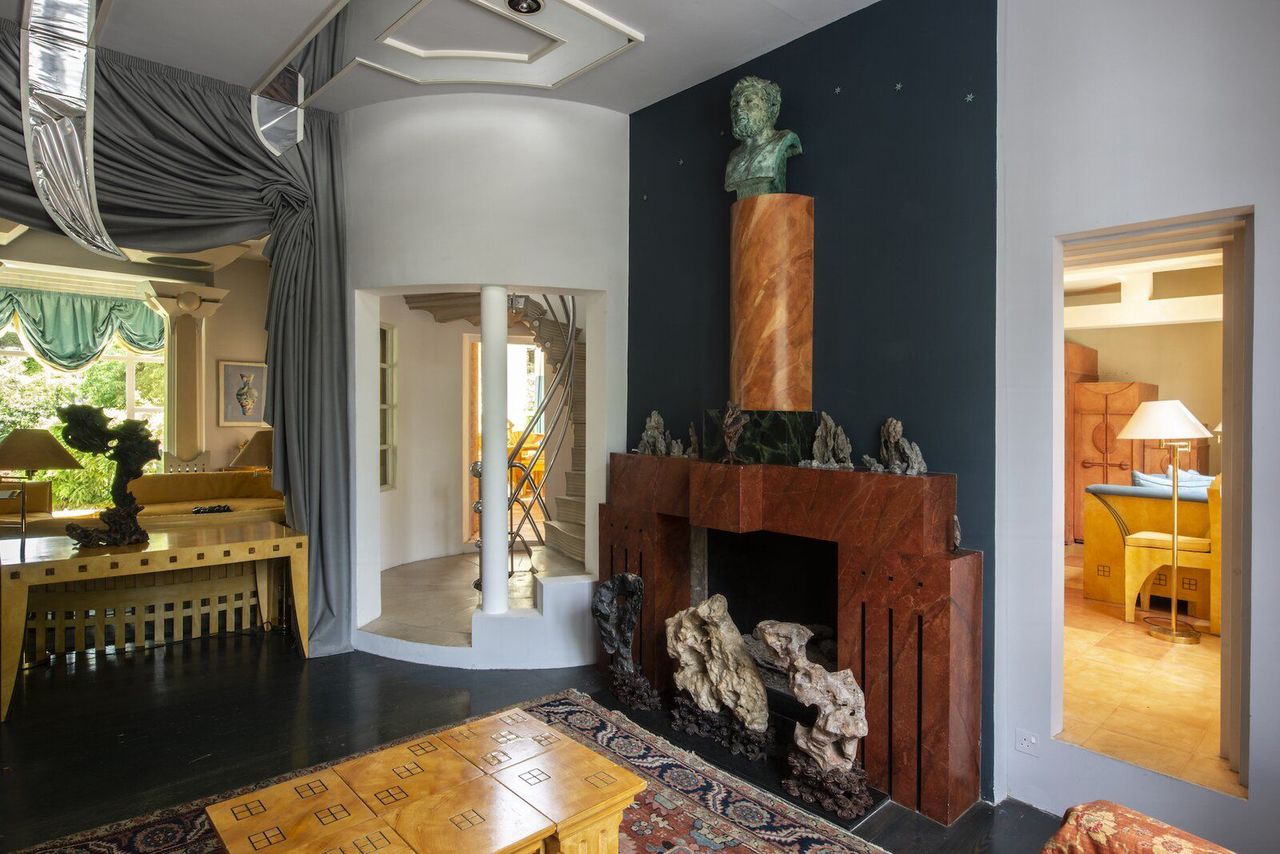 The Winter Room has a fireplace designed by Michael Graves with Celia Scott’s bust of Hephaestus looking over the room. Gongshi, also known as Chinese scholar’s rocks, dance in the hearth as if they were the fire’s flames. This view shows the layering of space, with glimpses into the Spring Room, Summer Room, and Autumn Room. 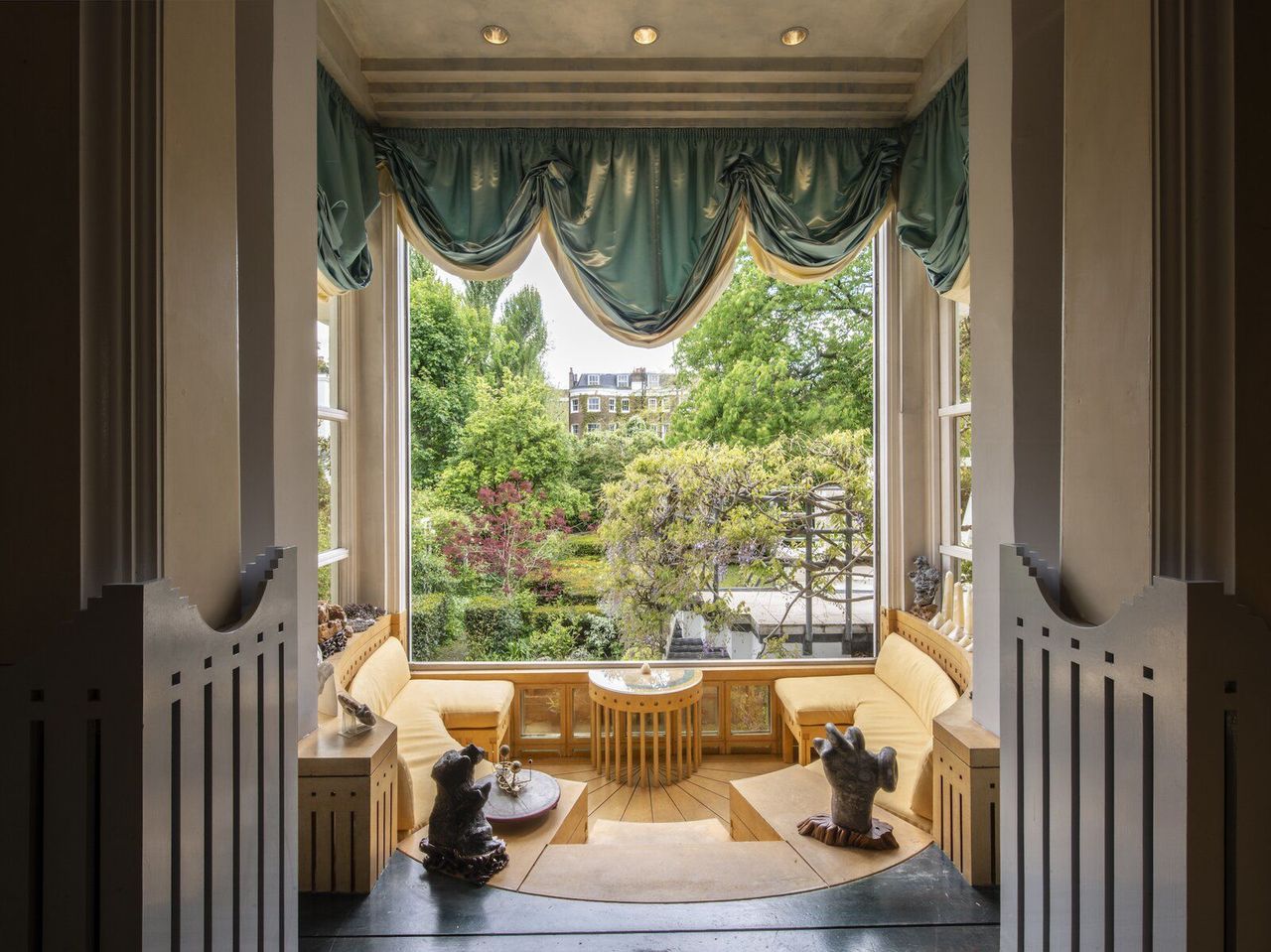 The Sundial Arcade faces south over the garden room with radial seating around a sundial. The entire window to the garden lowers into the floor with the flick of a switch, while the ruched drapes evoke the form of gathering clouds-a playful nod to London’s famously gray weather. 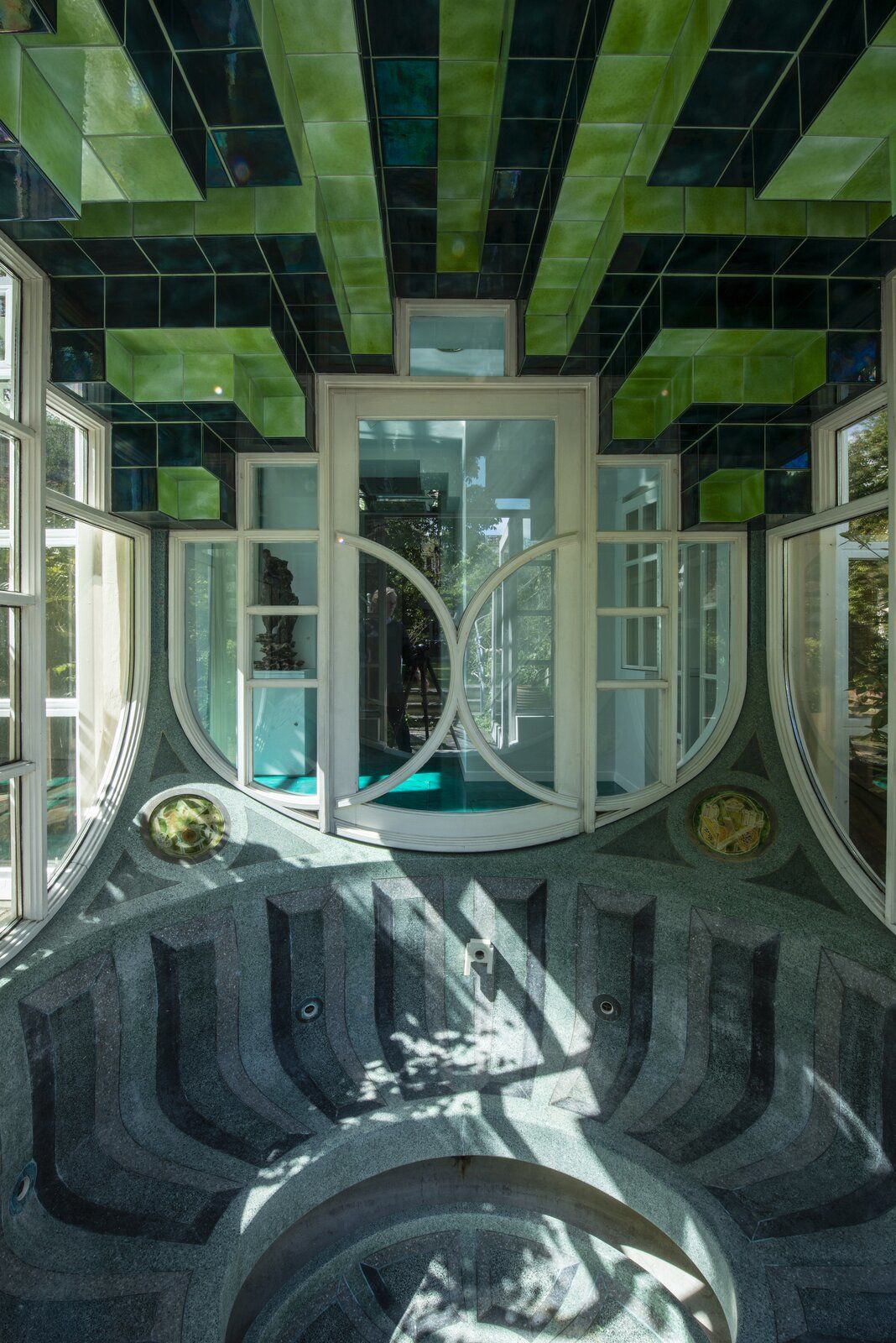 The Dome of Water is a hot tub designed by Piers Gough, with a design based on an inverted dome by Borromini. It was built to accommodate six people, but was unable to be heated, making it mostly unusable in the British weather. Lily Jencks remembers using it just once.

In true postmodern style, there’s a hefty dose of kitsch-Charles was known for saying, "If you can’t take the kitsch, get out of the kitchen." The Cosmic Oval, for example, playfully leads to the Cosmic Loo. In the Spring Room, a large oval seating element is framed by spiraling lights with a literal spring motif.

Originally named the Thematic House, the home was given its current moniker when it was listed as a historic landmark and became the nexus for the Jencks Foundation-a kind of "cultural laboratory that will continue to bring different voices into the conversation about our postmodern culture," says Lily. Programming includes residencies, salons, seminars and grants. 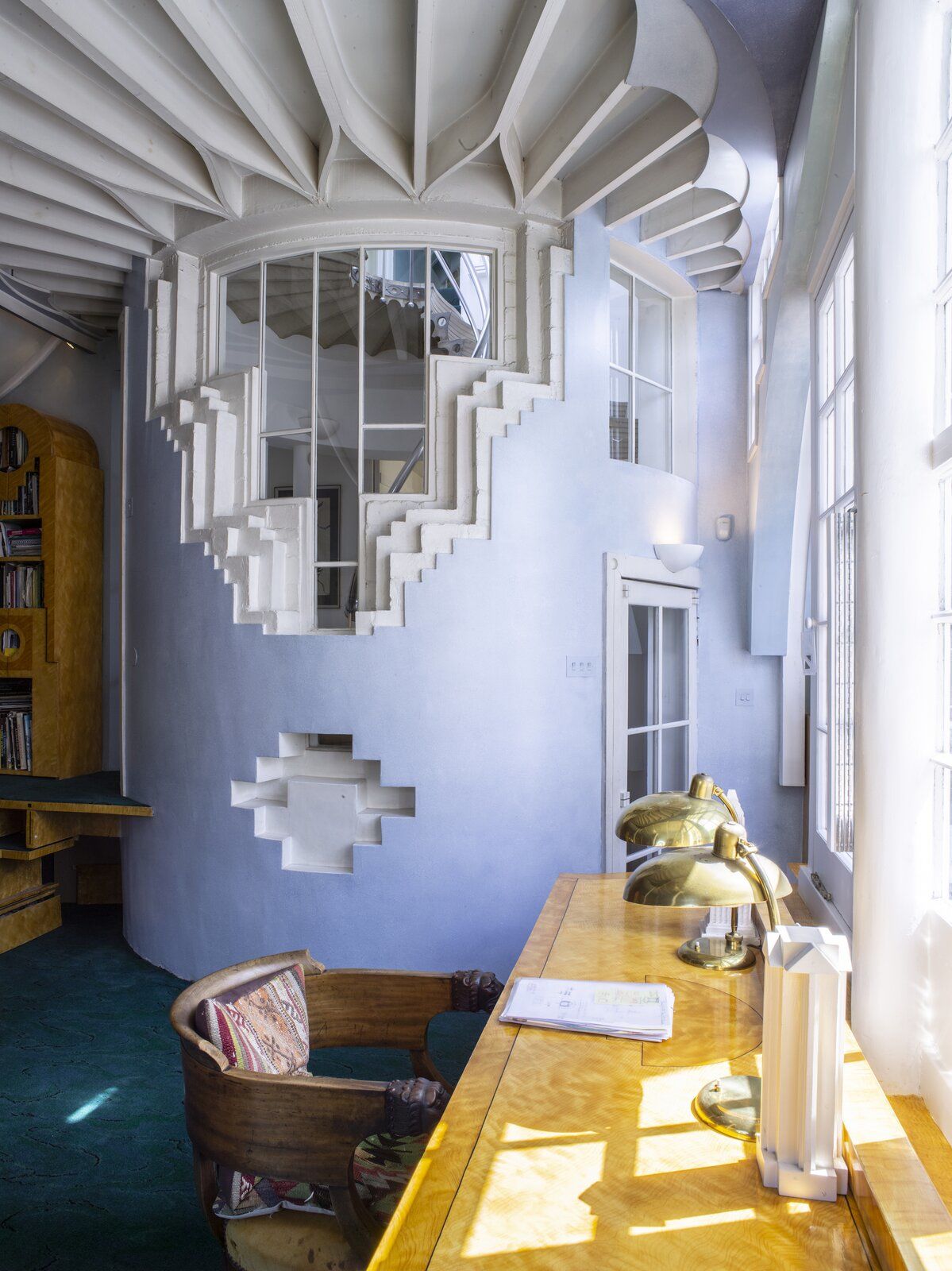 The Architectural Library is entered from the Solar Stair. Here you can see the radial structure of the library roof expressed as sun rays. Cut outs around the stair resemble a surprised face, while the layers of construction are visible in the window detail-a postmodern play on the modernist desire of truth in materials. 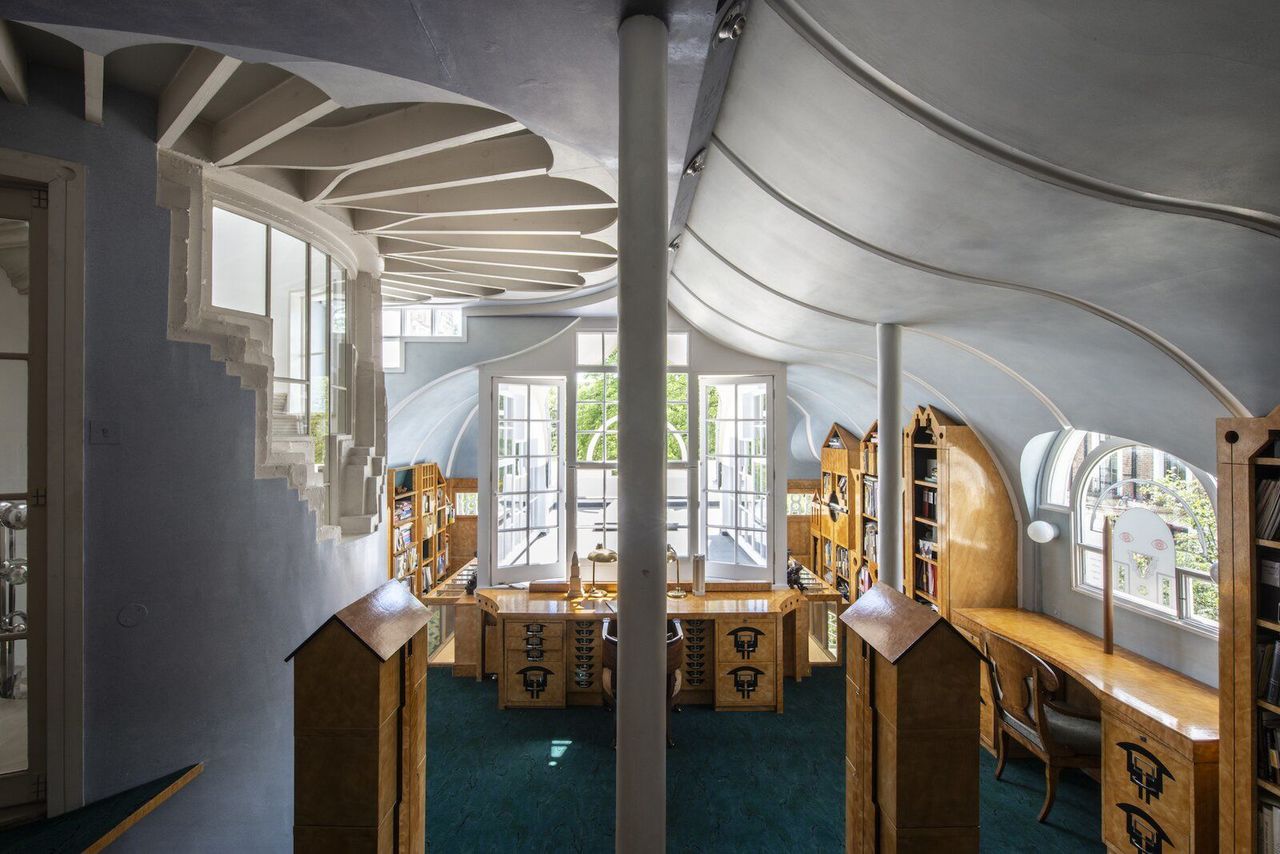 The Architectural Library is Charles’s study with a tent-like roof painted to be the sky. It is conceived as a "city of books," designed so that each bookshelf relates to the thematic style or individual architect the bookshelf contains. 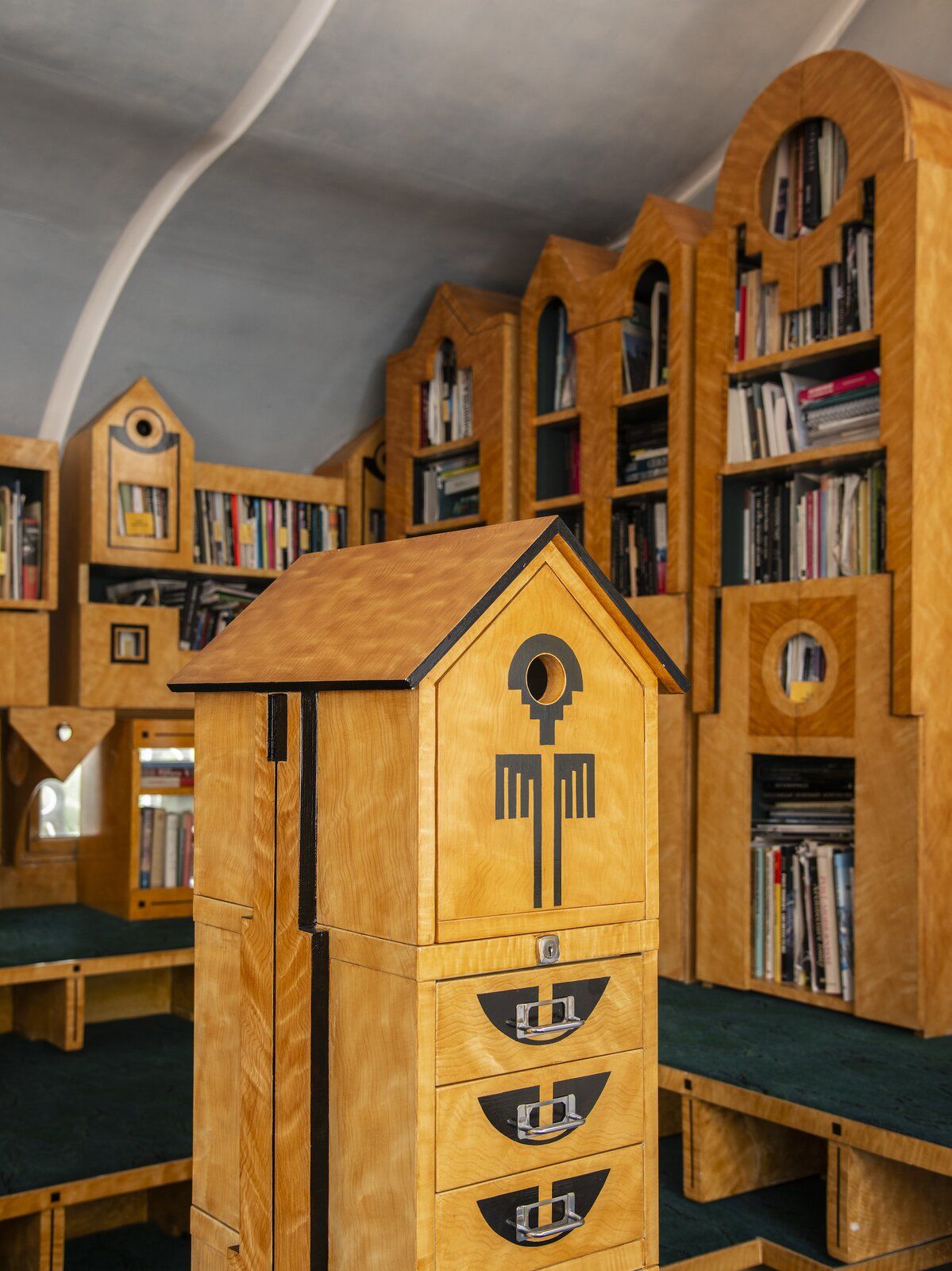 The Architectural Library is furnished with a series of "slide-scrapers," an ad hoc combination of off-the-shelf filing cabinets with painted MDF (medium-density fiberboard) ornamentation designed by Charles himself. 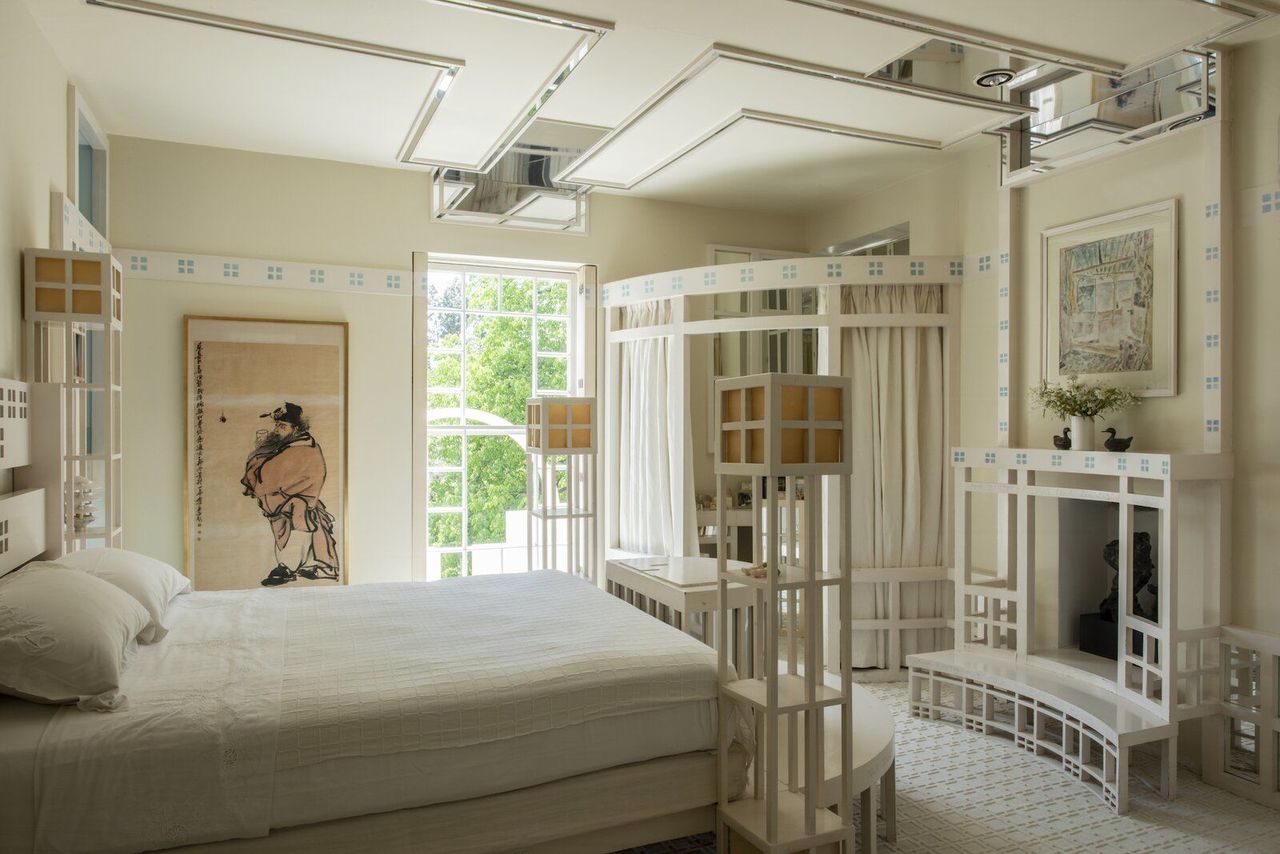 The Four Square Room was Charles and Maggie’s bedroom, designed around many iterations of the subdivided square motif which Charles considered the most elemental form of architecture. One of the curved, Baroque-style corners of the room conceals a small dressing room.

Before the home opened to the public on September 24, a new public entrance and exhibition space was created in the basement by excavating the existing garage. "[It] illustrates and elaborates a historical connection to the cosmic through cultural and scientific references," explains Lily. "The rest of the house is very much as it was when [Charles] was living here, and indeed, much the same as when I grew up here." 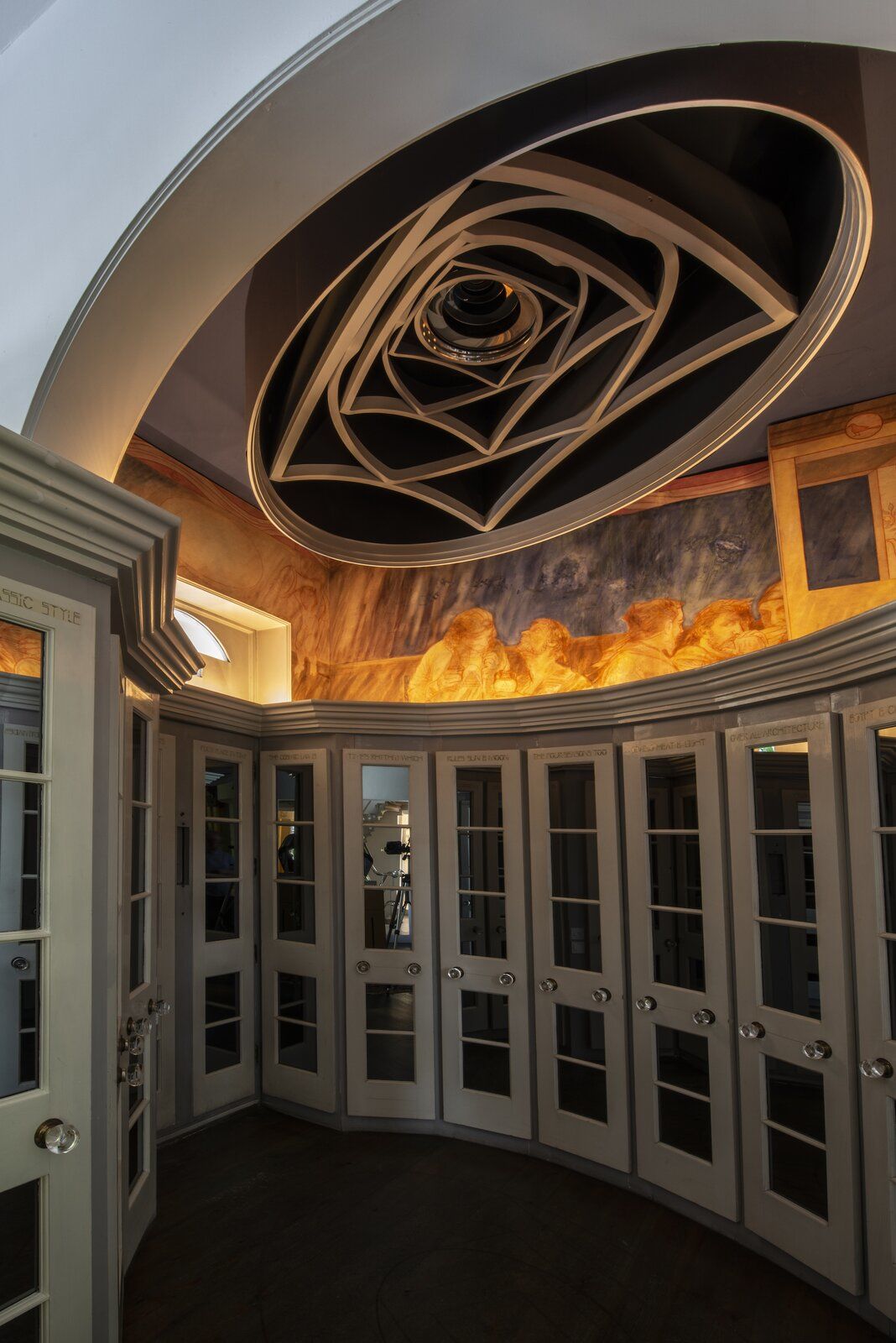 The Cosmic Oval at the home’s entrance, with its epigraphy in the Jencksian script, sets up the major and minor themes that visitors will find throughout the house. The playful mirrored doors-some of which are false-each have two handles, challenging perceptions of what is real. One opens to a bathroom known as the Cosmic Loo, and cloakroom. 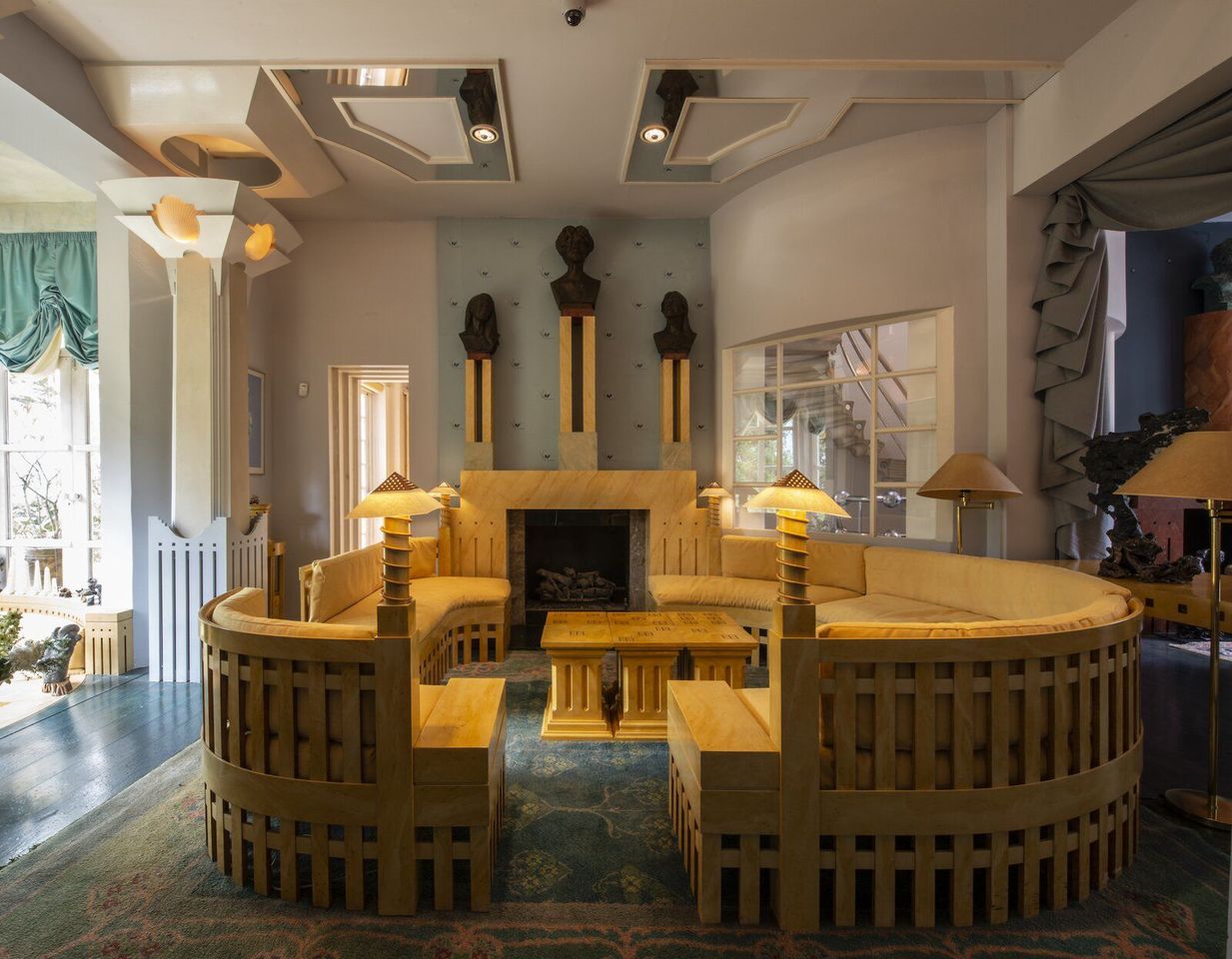 The Spring Room has a fireplace designed by Michael Graves, crowned with three female representations for each month of spring by Penelope Jencks. The playful light detail adds an air of irreverence to the space, keeping with the home’s postmodern ethos. 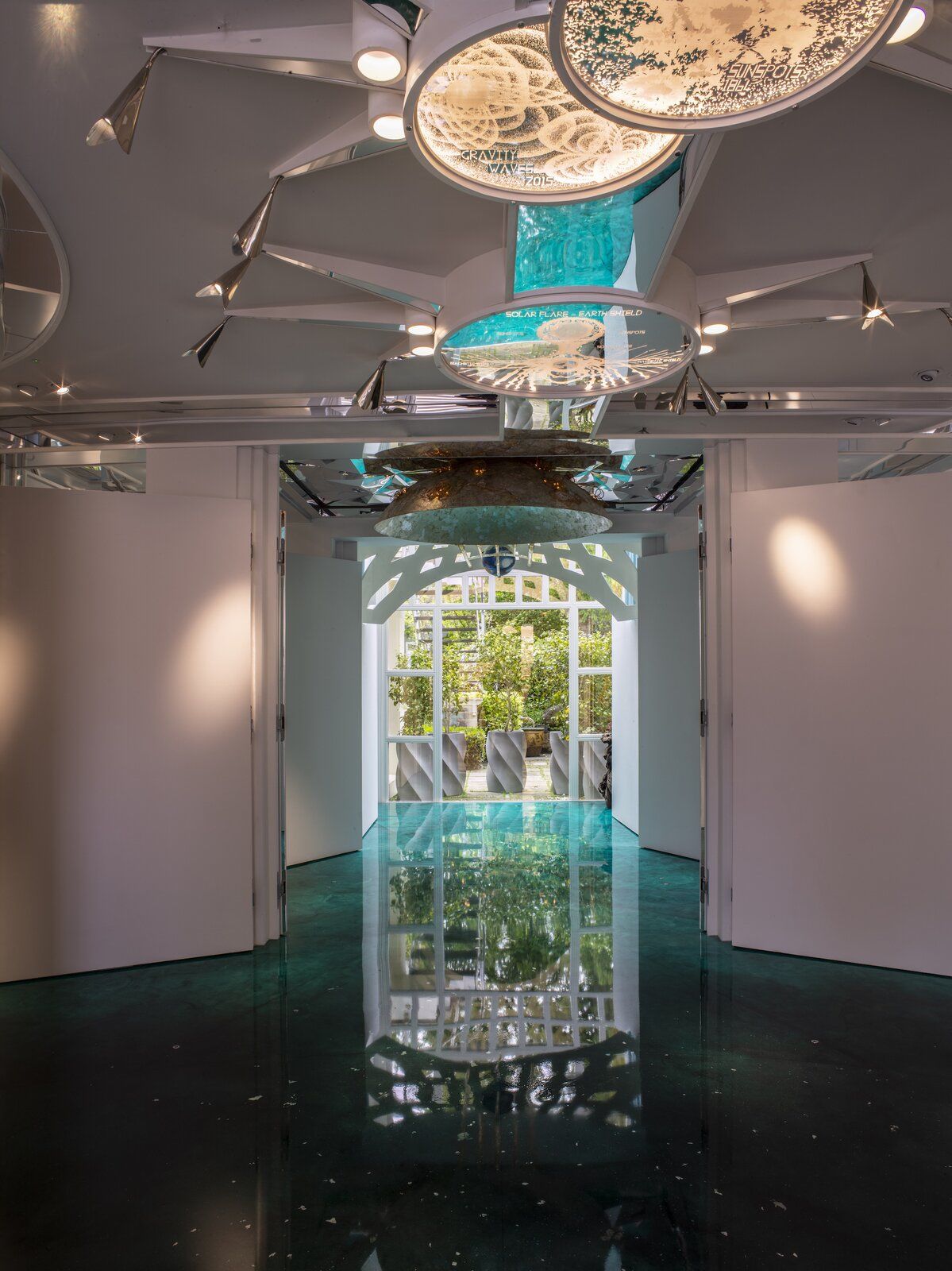 The ceiling lights in the new exhibition room portray the evolution of scientific representations of the sun. The room looks out to the Time Garden, with a floor that resembles malachite, and a sculpture by Charles and Lily Jencks hangs above. A series of mirrored medallions throughout the space celebrate knowledge, poetry, word games, and scientific landmarks.

Though the exhibition will run until the end of August next year, tickets are completely sold out-a testament to the home’s polarizing design. "It is really interesting to see the different details or ideas that people are drawn to," says Lily. "There are lots of people who are horrified by the house stylistically, but can still keenly engage with the debate about its meaning for architecture and its role in public life that the house inspires." 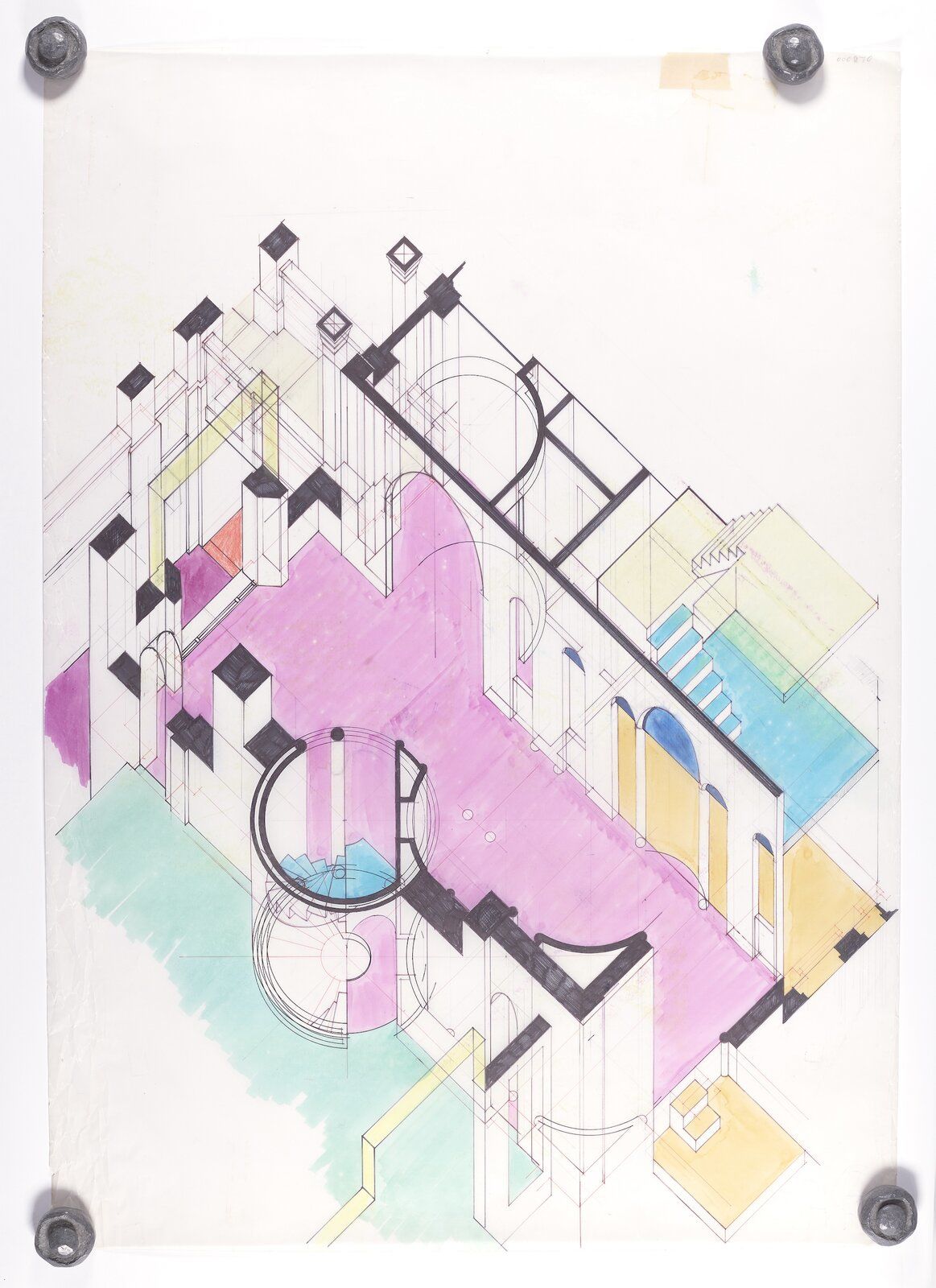 The gallery space is currently hosting an exhibition dedicated to the Cosmic House, featuring a number of original drawings and a short documentary video. This axonometric drawing of the interior of the home was done by Farrell sometime between 1978 and 1981, and shows the annexed lower-ground floor. 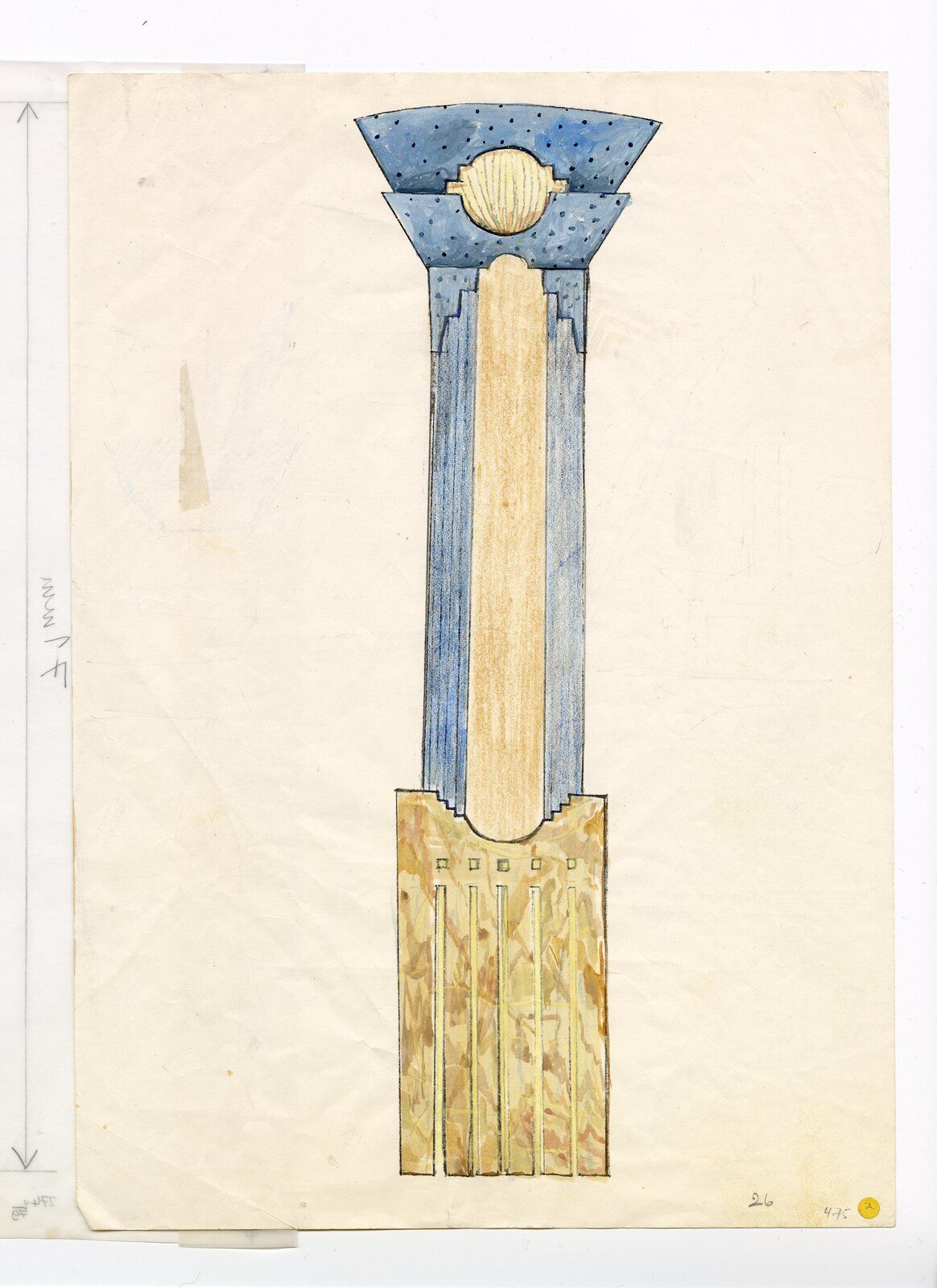 This is an original design for Charles Jencks's London columns, which can be found throughout the home. In the Spring Room, they feature shell-like sconces-the shell being the symbol of spring-and miniature skyscrapers at the base. The illuminated scallops are intended to evoke the sun appearing from behind clouds in the London sky. 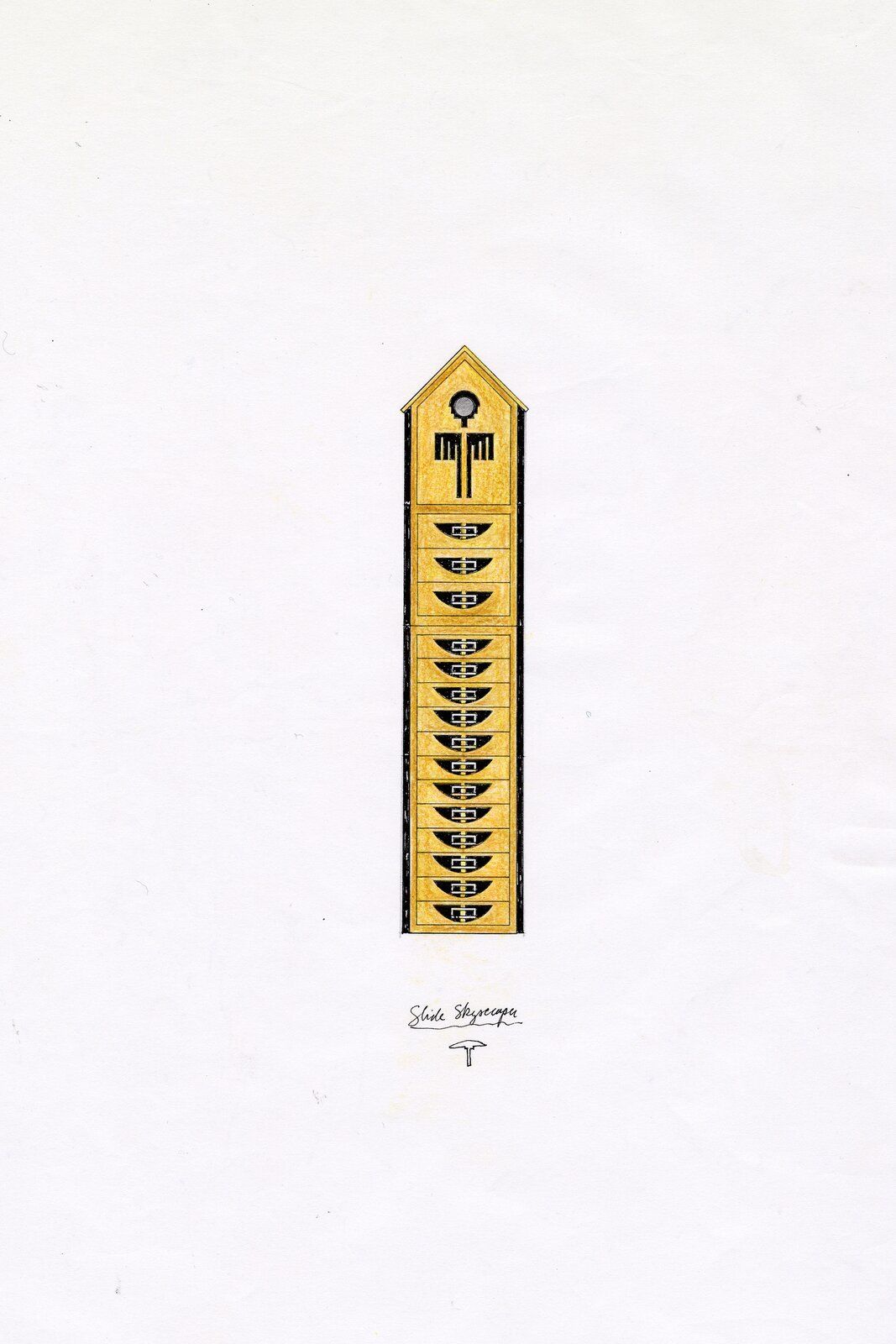 Charles Jencks’s original design for his Slide Scraper-which can be viewed in the Architectural Library-is on display. 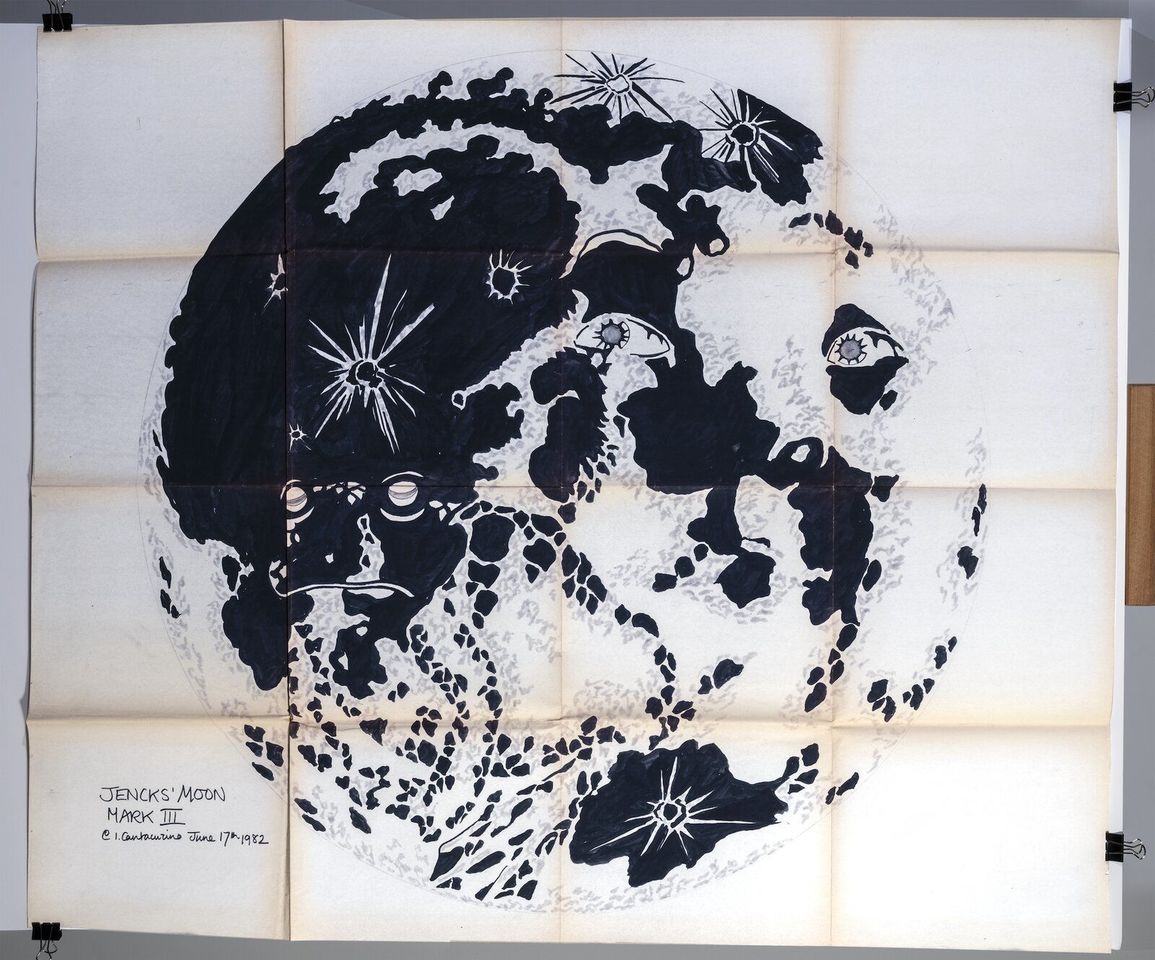 The Jencks Moon by artist Ilinca Cantacuzino, created in 1982, is also a part of the exhibition.