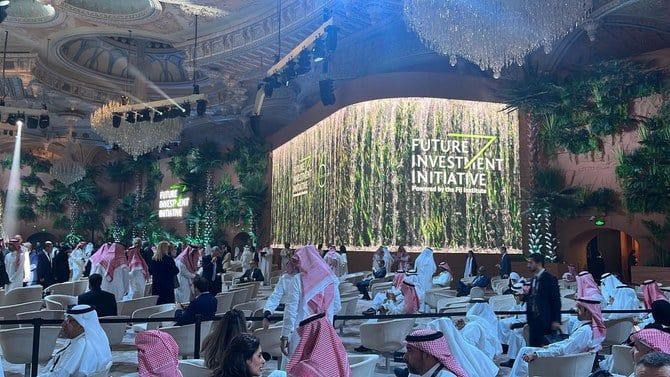 With more than 6,000 of the world’s business leaders, policymakers, investors, entrepreneurs and tech experts, the 6th edition of the Future Investment Initiative proclaiming Saudi Arabia’s investment might and transforming business environment concluded in Riyadh on Oct 27.

During Thursday’s session, delegates explored various issues, including the necessity of transforming investment and banking sectors for a resilient economy, the vitality of venture capitals, and the importance of economic sustainability.

There were also discussions around concerns surrounding environmental, social, and governance, and the role of small and medium enterprises in the economy, both regionally and globally.

During the event, Saudi Arabia’s Public Investment Fund announced the launch of a Local Content Growth Program aiming at growing competition and innovation in the private sector.

According to PIF, the initiative aims to achieve the goal of 60 percent of the Kingdom’s economy being generated through local content by 2025.

Noted agreements signed during the event

Several agreements and deals were signed as a part of the event, with the most noted one being between ACWA Power and European Bank for Reconstruction and Development aimed at developing projects in renewable energy. This includes green hydrogen, green desalination, sustainable energy solutions, along with gender and economic inclusion.

Another agreement signed during the event was between the Saudi Tourism Development Fund, Dana Bay Co. and IHG hotels and resorts to finance a Dana Bay intercontinental resort in Khobar.

During the event, Saudi Information Technology Co. and NIL, a part of Conscia Group signed a strategic agreement to establish a systems integration company in Riyadh.

In a panel discussion titled, ‘Transforming Banking and Investment for the Resilient Economy,’ Saad bin Abdulaziz Al-Khalb, CEO of Saudi EXIM Bank Group, said that the bank provided SR20 billion ($5.3 billion) to support the Kingdom’s exports since its establishment in February 2020.

Al-Khalb also noted that Saudi Arabia’s Export Credit Agency and EXIM Bank are strategic partners for commercial and financial institutions, and support them in their credit offering and mitigating financial risks while carrying out cross-border and long-term transactions.

In another panel discussion, Khalid Al-Mudaifer, Saudi Vice-Minister for Mining Affairs, said Saudi Arabia is the best place to invest in mining, as the Kingdom has all the welcoming factors which include proper mining law, investment ecosystem, infrastructure and technologies which include 5G connectivity and cybersecurity.

He also invited mining leaders to attend the Future Mineral Forum which will take place in Riyadh on Jan. 10 to 12, 2023.

Robert Wilt, CEO of Saudi Arabian Mining Co. — known as Ma’aden — said the firm has been the best-performing mining stock over the last 10 years, in total shareholder return.

Piverger added that there is a correlation between diversity, equity, inclusion and performance when it comes to venture capital.

John Quinn, chairman of Quinn Emanuel Urquhart & Sullivan, said ESG has become politicized, and several people think that it is something governments should do, instead of funds or private equity firms.

Quinn also added that it lacks metrics and comparability.

“One of the problems ESG faces is, fundamentally, it is too vague. If you look at ratings for credit agencies, they correlate 98 to 99 percent. If you analyze ESG ratings, ratings do not correlate. This is a real problem. There should be an agreed matric while evaluating ESG scores,” said Quinn.