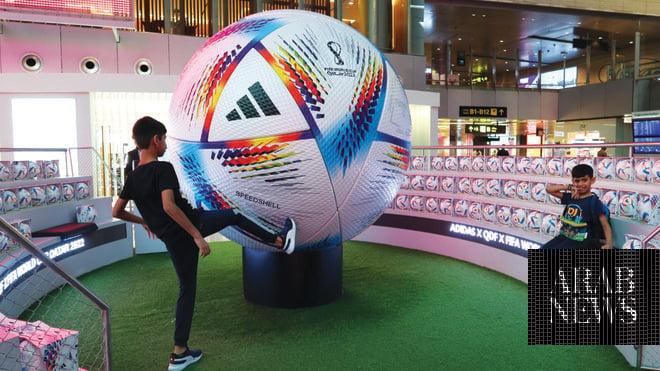 Over 50,000 trained to provide security in Qatar

Over 50,000 people have been trained to provide security at the World Cup in line with FIFA standards, and international security personnel will operate under a unified Qatari command, an Interior Ministry spokesperson said.
During the tournament, Qatar won’t be issuing normal visas and those coming for the matches must have a Qatari-issued Hayya card.

The card verifies you have housing for the time you’re in the country or will travel in just for the match you’re watching.

The Hayya card also required for entry into stadiums. Also keep in mind that Qatar has only one land border, with Saudi Arabia, if you’re thinking about driving.

Fans who do not have match tickets can apply for a Hayya card after the World Cup group stages end on Dec. 2, the spokesperson also said. Some 1.2 million people are expected to pour into Qatar during the upcoming 2022 FIFA World Cup that begins this month.

With fans coming from all over the world, reaching Qatar on the Arabian Peninsula, as well as getting around once there, remains a concern. Estimates suggest that as many as half a million people may be in the country each day during the height of the competition.

Qatar has become a hub for East-West travel, thanks to its long-haul carrier Qatar Airways. Already, the airline is offering tailored flight, hotel and ticket options for its customers.

Dubai is gearing up to have its low-cost carrier FlyDubai run as many as 30 trips a day into Doha to allow spectators to watch a match and then shuttle back to hotels in the emirate.

Those flying in will land at Doha’s Hamad International Airport, a massive airport that Qatar built for $15 billion and opened in 2014.

The airport has plans to expand further in 2022 to handle 58 million passengers a year. Passengers will clear immigration and customs checks before heading out into the city.

Qatar has had strict rules regarding travel and the coronavirus since the pandemic began, but they were loosened as of Nov. 1. Qatar has dropped a requirement for PCR testing prior to your trip to the country, and said it’s no longer required to download its Ehteraz contact-tracing app.

As you walk out of the airport, you have several options on how to get around. Qatar’s state-owned Mowasalat transportation company offers taxi cabs at curbside.

Major ride-hailing apps like Uber also work in Qatar. Mowasalat runs a bus service at the airport, too. Doha also has a recently built metro service, which will take you from the airport to most areas in the capital.

The metro also connects to a tram now running in Lusail. You can rent a car at the airport, though officials are urging those coming to the tournament to take mass transit. On match day, public transport will be free to those holding tickets. Keep in mind that Qatar’s riyal currency trades at $1 to 3.64 riyals. There are 100 dirhams in each riyal.

Outside of the tournament, Doha has several cultural sites to visit. Qatar’s Museum of Islamic Art offers both interesting views inside its galleries and a view outside of the city’s skyline.

Nearby is Doha’s Souq Waqif, which has traditional storefronts and gifts for sale — even including a falcon section.

The National Museum of Qatar, designed by French architect Jean Nouvel, is a take on the desert rose. Qatar’s National Library also is renowned for its design. Doha’s Mall of Qatar has some 500,000 square meters for shopping. There are also beachfront resorts and tour companies offer trips into Qatar’s desert expanses as well.
#Coronavirus