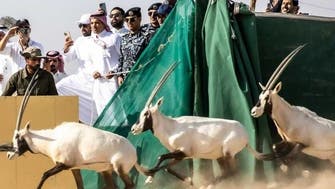 Saudi Arabia has returned endangered oryx to the desert in NEOM - the Kingdom’s flagship business and tourism development in the Red Sea - for the first time on 100 years.
The oryx - alongside three other species; ibex, sand gazelles and mountain gazelle - arrived from the National Center for Wildlife in Riyadh in late October.

After spending time in specially designed pens to acclimatize to their new environment, NEOM’s newest inhabitants were released into the larger reserve. This is a key first step in NEOM’s plans to make globally significant contributions to conservation.

The initiative, launched in collaboration with NCW, marks the first phase of NEOM’s rewilding program, which aims to conserve wildlife and showcase the unique biodiversity of the region.

Covering a vast area of 25,000 km2 and helping to deliver the nature conservation and environmental components of Vision 2030 and the Saudi Green Initiative (SGI), one of which is NCW wildlife breeding initiative, NEOM’s Nature Reserve aims to host one of the largest rewilding programs in the world. Residents, tourists, and wildlife will all have an opportunity to benefit from NEOM’s regreening and rewilding model, with the knowledge used to enhance other areas across the region.

Dr. Paul Marshall, dead of the NEOM Nature Reserve, said: “The wildlife release was an historical moment: this is the first time that oryx have walked the sands of NEOM for nearly 100 years.”

“It was also a demonstration of our commitment to the protection of nature, which is at the core of NEOM’s vision.”

“We aim to be at the forefront of redefining nature conservation and NEOM’s Nature Reserve provides an unrivaled landscape to support this aspiration. Through the establishment of a world-class protected area, we will be able to preserve 95 percent of NEOM’s land and sea for nature, and implement a science-based program of protection, restoration, and rewilding.”

The arrival of the animals marks the first stage of NEOM’s wider nature restoration efforts, including a major regreening initiative which positions NEOM as a leading player seeking to restore wildlife abundance, reintroduce rare or locally near-extinct wildlife species, and ensure protection of wildlife from illegal hunting.

NEOM’s Nature Reserve aims to provide a landscape of opportunity to implement innovations that tackle planetary problems, such as biodiversity loss and species extinctions. Through pioneering research partnerships, solution scaling and technology acceleration, NEOM will be at the forefront of accelerated efforts to protect our natural world.

Dr Mohammed Qurban, CEO of the NCW, said: “Our partnership with NEOM aligns with the objectives of the national program for reintroducing endangered local species back into their natural ecosystems, one of the SGI initiatives. By supporting the Kingdom’s strategy for environmental conservation, this initiative contributes to sustainable development, promoting the growth of local ecosystems and ensuring their biodiversity.”