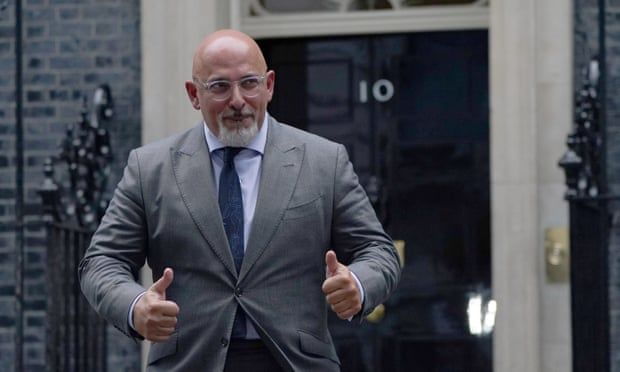 Former vaccines minister promoted by Boris Johnson after winning plaudits for efficient and fuss-free jab rollout
Nadhim Zahawi, whose star has risen during the pandemic as vaccines minister, is to become education secretary after Gavin Williamson’s gaffe-prone tenure came to an end.

Zahawi has been promoted by Boris Johnson after winning plaudits over the efficient and fuss-free Covid vaccine programme, a style that may serve him well in an education sector buffeted by Williamson’s more confrontational style.

Theresa May appointed him as a junior education minister and he was moved to become industry minister 18 months later. In late 2020 Zahawi was picked by Johnson to be the vaccines deployment minister – a high-pressure role given the enormous significance placed on the rapid distribution of vaccines as the government’s main weapon against Covid-19.

Zahawi was credited with the speed of the initial programme, which for a period brought Johnson a notable boost in the polls.

Robert Halfon, the Conservative MP who chairs the House of Commons education committee, praised Zahawi as someone who “could find mangoes in the Antarctic” and reenergise the government’s education policies.

“It may be that that’s the kind of organisation that the Department for Education needs. Perhaps it needs a big shake-up and a brilliant organiser, which he’s shown as vaccines minister he is very capable of doing.

“There’s a massive in-tray and I think that Nadhim will get to grips with it,” Halfon told the BBC.

Zahawi said that he was “honoured” to be back at the DfE as education secretary.

“Children and young people have had a tough time during this pandemic and I’ll be listening to them and their families as we accelerate our work to build back better and fairer,” he said.

“From my own experience, I know what a beacon of opportunity this country can be and I want all children, young people and adults to have access to a brilliant education, the right qualifications and opportunities to secure good jobs. That’s both vital for them and also our economy and is more important now than ever before.”

The most pressing issue the new education secretary faces is next month’s comprehensive spending review.

As Williamson’s star waned, he struggled to sway the Treasury over funding but Zahawi may do better, especially over the thorny issues of crumbling school buildings, teachers’ pay, higher education funding and tuition fee loans.

Mary Bousted, the joint general secretary of the National Education Union, said: “The comprehensive spending review is in a matter of weeks. The new secretary of state must be a strong advocate for schools and colleges to be given the resources and funding they need to support education recovery for all children and young people. There can be no more important priority for the future of our nation.”

One big issue is repairing the lost learning suffered by children during the pandemic. Sir Kevan Collins, the government’s catch-up tsar, quit in spectacular fashion earlier this year, blaming No 10 for the failure to fund his proposals totalling £15bn.

Collins said the issue must be the next education secretary’s top priority as soon as he stepped into office.

“Delivering a broad recovery plan remains an absolute priority. It’s not going to happen naturally. We have to make this happen. We have to support schools. It has to be the number one priority,” Collins said.

There are also an array of difficult decision to be made, including how to grade and award the results of next summer’s exams, which are a little more than six months away for this year’s cohorts of year 11 and year 13 students.

Williamson’s two botched exam seasons means that the grade acceleration of 2020 and 2021 will need to be tamed eventually – creating some potentially bad headlines for the government.

Born in Baghdad to Kurdish parents, who fled Iraq for the UK when he was nine, Zahawi is one of the Commons’ richest MPs, as a co-founder of pollsters YouGov and with interests in other areas such as petroleum before he became a minister.

Zahawi’s BSc degree in chemical engineering from University College London marks him out as a break from the Oxbridge and humanities graduates who more regularly populate the DfE’s top post. But unlike Williamson, who attended a state comprehensive, Zahawi attended King’s College School in Wimbledon, where fees are more than £20,000 a year.