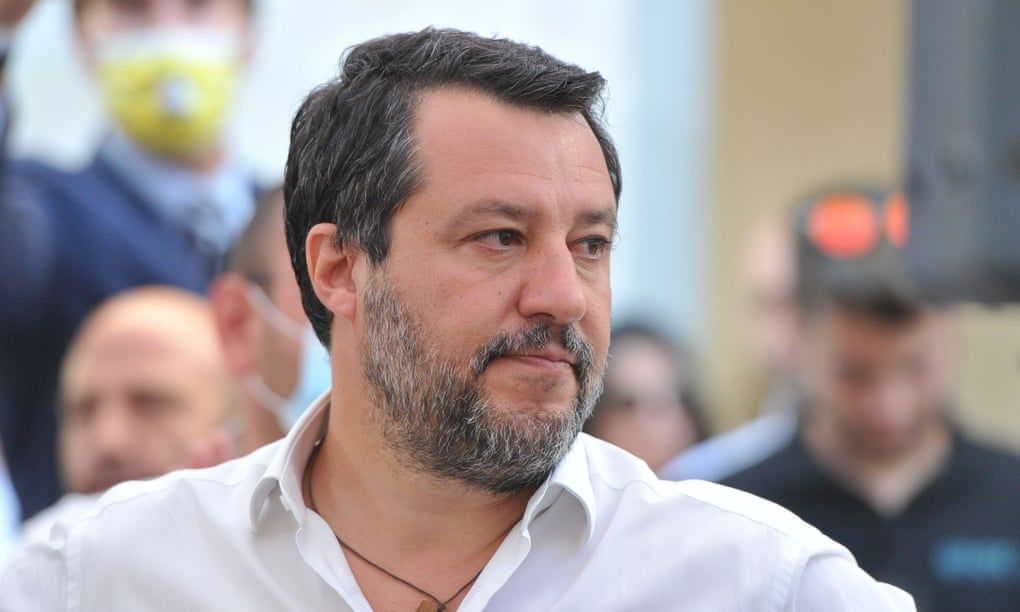 Whether they’re camped outside in freezing temperatures or stranded at sea, Matteo Salvini exhibits little sympathy for the asylum seekers blocked at European borders. The Italian far-right leader, who as interior minister attempted to stop NGO rescue boats landing in Italian ports, in one case leading to criminal charges, will travel to Warsaw next month in a show of solidarity with his Polish allies who have deployed hardcore tactics to ward off thousands of refugees trying to enter from Belarus.

“I think that Europe is realising that illegal immigration is dangerous,” Salvini told the Guardian in an interview conducted before 27 people drowned attempting to cross the Channel in an inflatable boat. “So maybe this shock will be useful.”

The Poland border crisis is the perfect opportunity for Salvini to reignite his faded rightwing populist star as he plots his strategy for Italy’s next general election, which is slated for 2023 but could come sooner. An earlier attempt to capitalise on soaring opinion poll ratings by collapsing his League party’s coalition with the anti-establishment Five Star Movement (M5S) and forcing fresh elections spectacularly backfired, instead sending the party into opposition, but in a peculiar twist of events it returned to government in February as part of an emergency administration led by the former European Central Bank chief Mario Draghi.

Salvini once accused Draghi of being “complicit in the massacre of our economy” for his role in saving the euro. Nowadays he says Draghi is “very good”, especially when it comes to protecting Italy’s interests abroad.

But Salvini, described by some as a political chameleon, is also very much in campaign mode, resorting to his tried and tested formula of immigration, nativism and Euroscepticism before the election.

Salvini does not have a ministerial role but items on the desk of his spacious office in the Italian senate – cluttered much like a family home with pictures of him with his children and girlfriend, images of Jesus and the Virgin Mary, an AC Milan shirt and a yellow toy bulldozer on a bookshelf – give an insight into his current positioning. One document contains a list of items Salvini wants inserted into Italy’s budget for 2022, including a fund to help disabled people. Another lays out plans by a revived alliance of European far-right political forces, including the League and Marine Le Pen’s National Rally, to create “an alternative Europe”.

“I can be in a pro-Europe government while dreaming of a different Europe,” Salvini said in an interview. 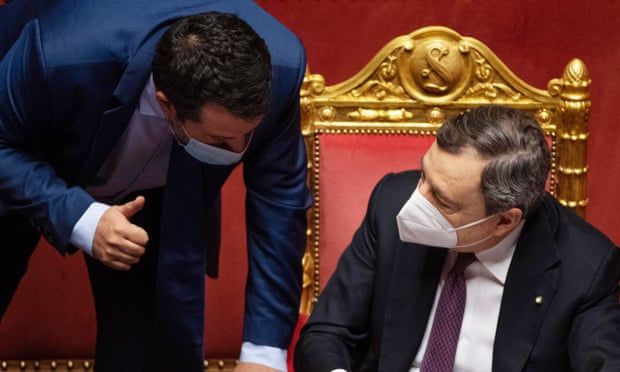 Salvini speaking with Mario Draghi in the Italian senate in April.

He said he joined Draghi’s broad coalition because it was the right thing to do as Italy recovers from the pandemic. “In government the League can take care of things such as tourism, the flat tax, people with disabilities … Did you see those people leaving as you came in? They’re business owners. They came to me because I’m in government and can help.”

But in a future campaign Italy’s dwindling birthrate will be a top theme for the League. “My objective is to give economic serenity to Italians to encourage them to have children,” Salvini said. “I refuse to think of substituting 10 million Italians with 10 million migrants.”

In August 2019 Salvini appeared to be on the verge of becoming prime minister when, from a beach near Rome, he announced it was impossible to patch up the League’s differences with M5S and that snap elections were the only way forward. As interior minister Salvini had been on a roll, brandishing rosary beads and posing for selfies as he packed squares up and down Italy with supporters who loudly applauded him for shutting off the country’s seaports to migrants.

The League was Italy’s biggest party, riding high in the polls, and he called on Italians to give him “full powers” – the same words used by the fascist dictator Benito Mussolini after he came to power in 1922. But Salvini was outplayed by M5S, which went on to form a government with the centre-left Democratic party, pushing the League into opposition, with an immediate hit to its poll ratings.

Ask former supporters of the party – which today polls in third place at about 18%, behind its far-right ally Brothers of Italy and the Democratic party – why Salvini lost favour and they inevitably point to his miscalculation. Many have switched allegiance to Brothers of Italy, whose leader, Giorgia Meloni, they say is more consistent. Brothers of Italy has continued its steady rise since choosing to stay out of Draghi’s government.

Salvini is taking his party’s knock in the polls in his stride even as Meloni, with whom he allies along with Silvio Berlusconi’s Forza Italia in elections, eclipses him in popularity. Bruised by the coalition’s defeats to the left in mayoral elections in major cities in October, he was left red-faced after a secret recording revealed him implying that Meloni was “a pain in the ass”. He insists he is not in competition with Meloni and would happily cast aside his own aspirations and let her be prime minister. “I will let the voters decide … but I’m not for pink quotas, green quotas or female quotas, what interests me is that [the candidate] is good, man or woman.” 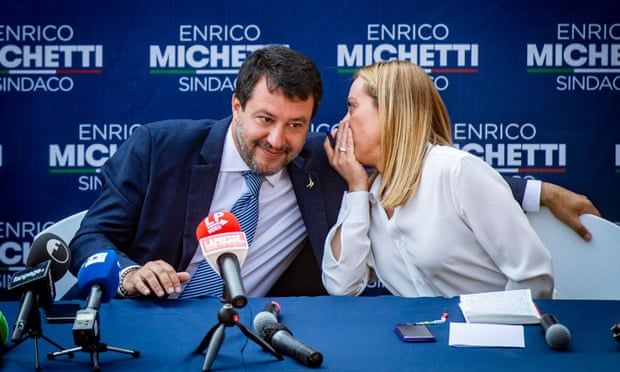 Salvini with Giorgia Meloni at a press conference in Rome in October.

He says he has no regrets about crashing out of power in 2019. “Life is a risk … we were part of a government which for the first year did good things, and then everything totally stopped,” he said. “M5S were against everything … then they started to say ‘Salvini is wrong on immigration’. I was part of a government in which I couldn’t manage to do what I promised to do.”

In his stint as interior minister he introduced draconian anti-immigration measures that included closing refugee centres, scrapping humanitarian protection permits and blocking migrant arrivals. He is unfazed at being on trial in Palermo on kidnapping charges for preventing the arrival of 147 migrants onboard the NGO ship Open Arms in August 2019. “I have no regrets. I did it [blocked the ships] 50 times and I would do it again. My main satisfaction from that period is that Europe remembered that Italy existed,” he said.

Asked if he could ever conceive of creating a more humanitarian immigration policy, he said: “I’d like to have an ad hoc ministry for immigration and international cooperation, one that includes a ‘humanitarian corridor’ to help bring in children from places like Libya and Afghanistan.” He said “a trained, foreign workforce” could be useful for Italy’s economy. “What I don’t want is them arriving on boats, that’s a mess.”

Salvini gets tetchy when the topic of fascism arises. The League started out as a northern separatist party, with its founder, Umberto Bossi, lamenting “damned fascists”, before Salvini took the helm in 2013 and began its pivot towards the hard right.

Despite evoking fascist-era figures in some of his speeches and social media posts, he said the League “has never had anything to do with fascists or nostalgia”. As for the partnership with Brothers of Italy, a party that emerged from neofascists, he said: “Even Brothers of Italy have changed. I hope that in 2021, fascism can be archived for everyone.”

If general elections were held anytime soon, the League, Brothers of Italy and Forza Italia could easily surpass the 40% of the vote likely to be required to govern. Salvini said they performed better in the towns and provinces beyond the cities, “which are more globalised, with things such as Amazon, and where there is less social connection”. Between them, they already hold 14 out of 20 Italian regions. “My objective now is the [national] vote. We are all in the hands of God but I am in good health. We will win.”