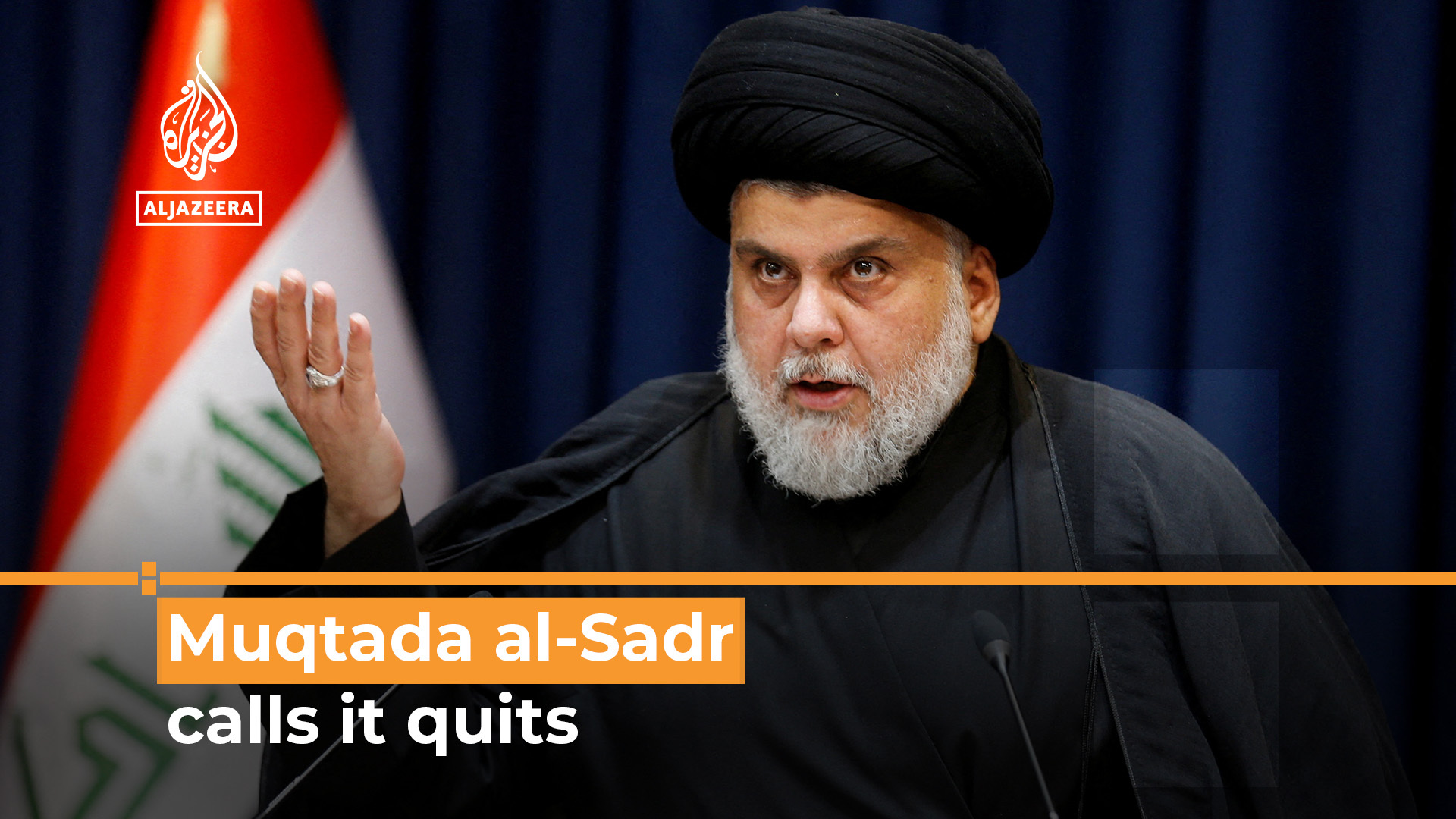 Iraq’s powerful Shia leader Muqtada al-Sadr has announced he is quitting political life and closing his political offices in a move that inflamed tensions and prompted protests by his supporters.

Gunfire rang out in the Green Zone of the capital Baghdad and security forces launched tear gas canisters on Monday to disperse al-Sadr supporters converging on the area. At least 10 people have been killed, the Associated Press and Reuters news agencies reported.

Al-Sadr’s statement, published on Twitter, came after months of protests by supporters backing his call for new elections and for the dissolution of the Iraqi parliament, which has seen 10 months of deadlock – representing the longest Iraq has gone without a government.

He added that “all the institutions” linked to his Sadrist Movement will be closed, except the mausoleum of his father, assassinated in 1999, and other heritage facilities.

The head of the Sadrist parliamentary bloc Hassan Al-Athary announced in a Facebook post later on Monday that al-Sadr began a hunger strike “until the violence and use of weapons” end.

The announcement was quickly met with escalation from al-Sadr’s supporters, who stormed the presidential palace, a ceremonial building inside the fortified Green Zone of government buildings.

Hundreds pulled down the cement barriers outside the palace with ropes and breached its gates. Many rushed into the lavish salons and marbled halls of the building, a key meeting place for Iraqi heads of state and foreign dignitaries.

Supporters, who have gathered at a sit-in since the end of July near the Iraqi parliament, also approached a counter-protest held by al-Sadr’s Shia rivals. The two sides hurled rocks at each other.

Iraq’s army declared a nationwide, indefinite curfew that went into effect at 7pm (16:00 GMT) on Monday.

In his statement, al-Sadr attacked his political opponents and said they had not listened to his calls for reform.

Al-Sadr has withdrawn from politics or government in the past and also disbanded militias loyal to him. But he retains widespread influence over state institutions and controls a paramilitary group with thousands of members.

He has often returned to political activity after similar announcements, although the current political deadlock in Iraq appears harder to resolve than previous periods of dysfunction.

Hamzeh Hadad from the European Council on Foreign Relations questioned the motivation behind al-Sadr’s move.

“It’s not quite clear what is he resigning from. Is he asking the other members of his party that hold bureaucratic positions in the state to resign? That’s to be seen,” Hadad told Al Jazeera.

“He has done this many times and usually when he does claim to be withdrawing or resigning from the political system, it’s usually before elections and he always ends up backtracking. So, the question again here is ‘Will he backtrack as well?'”

Monday’s announcement came two days after al-Sadr said “all parties”, including his own, should give up government positions in order to help resolve the months-long political crisis, while calling on those who “have been part of the political process” since the United States-led invasion of the country in 2003 to “no longer participate”.

Al-Sadr’s party, the Sadrist Movement, won the most seats in an October 2021 election, but he ordered his legislators to resign en masse in June after he failed to form a government of his choosing, which would have excluded powerful Shia rivals close to Iran.

The move, however, handed the initiative in parliament to his Iran-backed Shia opponents, the Coordination Framework alliance.

Al-Sadr’s supporters stormed the parliament building in late July and stopped his rivals from appointing a new president and prime minister.

Al-Kadhimi also directed an “urgent investigation” into Monday’s events and stressed that the use of live ammunition by security forces against protesters is “strictly prohibited”, Iraq’s state news agency INA reported.

“This resignation comes at a time that the political crisis in Iraq has reached an elevated stage,” said Abdelwahed. “It can be read in terms of disappointment, frustration by the Sadrist movements. But on the other hand it could be also read as an attempt to try to put more pressure on his rivals”.

He added the political deadlock has halted services that are “impacting the regular citizens”.

Iraq’s Supreme Federal Court is meeting on Tuesday to decide on whether parliament will be dissolved, although Farhad Alaaldin, the chairman of the Iraq Advisory Council, told Al Jazeera that the Iraqi constitution says it is “up to the parliament to dissolve itself”.

He said the court proceedings would likely be postponed if protests escalated.

Alaaldin said it was unlikely that al-Sadr would be stepping away from Iraqi politics for good. He has announced his withdrawal from political life before, only to walk his decision back.

“He wants to see Iraq in a way that he’s seeing it and he’s been working systematically since 2010, or you can say 2006, onward,” he said. “I don’t believe that he’s going to throw away everything that you’ve worked for for the past 18 years just on a tweet.

“He has a mission and he has a plan, and he thinks he has the way to make it into a different regime where he would be the dominant force.”

Iraq has struggled to recover since the defeat of the armed group ISIL (ISIS) in 2017 because political parties have squabbled over power and the vast oil wealth possessed by Iraq, OPEC’s second-largest producer.