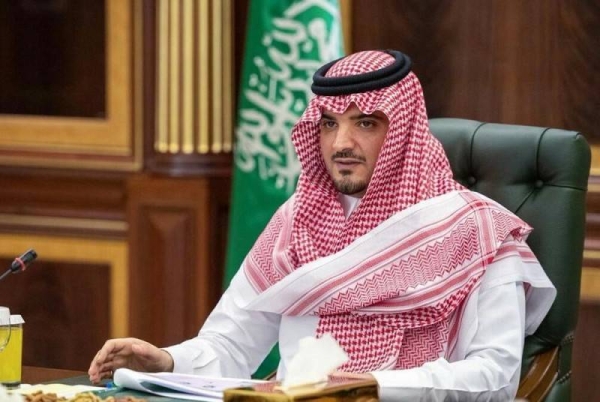 Minister of Interior and Chairman of the Supreme Hajj Committee Prince Abdulaziz Bin Saud Bin Naif lauded the pivotal role played by Crown Prince Mohammed Bin Salman in facilitating hassle-free and foolproof Hajj for nearly one million pilgrims from all around the world.
“Your direct follow-up of the operation of the annual pilgrimage and your unlimited support have been instrumental in overcoming obstacles and easing the difficulties faced by all those involved in receiving nearly one million pilgrims,” he said in a cable of greetings sent to the Crown Prince on the occasion of Eid Al-Adha and success of the annual pilgrimage of Hajj.

At the outset of the message, the minister congratulated the Crown Prince on behalf of himself, emirs of various provinces, members of the Supreme Hajj Committee, as well as security personnel, and employees of government and private agencies who participated in the operation of this year’s Hajj. “I am pleased to extend my congratulations to you for the success of this year’s Hajj season, thanks to God and then to your direct follow-up and the unlimited support that the sectors working in Hajj have received. You have been instrumental in overcoming obstacles and easing the difficulties so that all parties involved in the Hajj operation were able to implement security and service plans and health protocols while receiving nearly one million pilgrims with high precision, as well as to provide them with all the necessary services with the highest quality and standards,” he said.

Prince Abdulaziz noted that the committee formed under the chairmanship of the Crown Prince to follow up on the challenges facing the Ministry of Hajj and Umrah had a great impact on accelerating the pace of work to overcome obstacles and complete the facilities required for Hajj this year, apart from overcoming the effects of the coronavirus pandemic.

The minister said that the pilgrims performed their rituals in ease and comfort throughout the six days of Hajj ever since their convergence in Mina on the first day until completion of all the rituals on the sixth day on Tuesday following the Tradition of the Prophet (peace be upon him). “The security, health, preventive, organizational, and service plans have been implemented with high professionalism by the security personnel and this was with the participation of employees of other government and private agencies. This is in accordance with a precise organization and strict adherence to the requirements set by the highest authorities,” the minister said while noting that the security and health situation was sound and stable. “This year’s pilgrimage did not witness anything that undermines the security of Hajj and the peace of pilgrims, and no epidemic or quarantine cases were also recorded,” he said.

Prince Abdulaziz wished the Crown Prince good health, and prayed God to reward him abundantly for the top quality and high tech services being rendered to the Two Holy Mosques as well as to ensure the comfort and safety of Hajj and Umrah pilgrims.
#Coronavirus