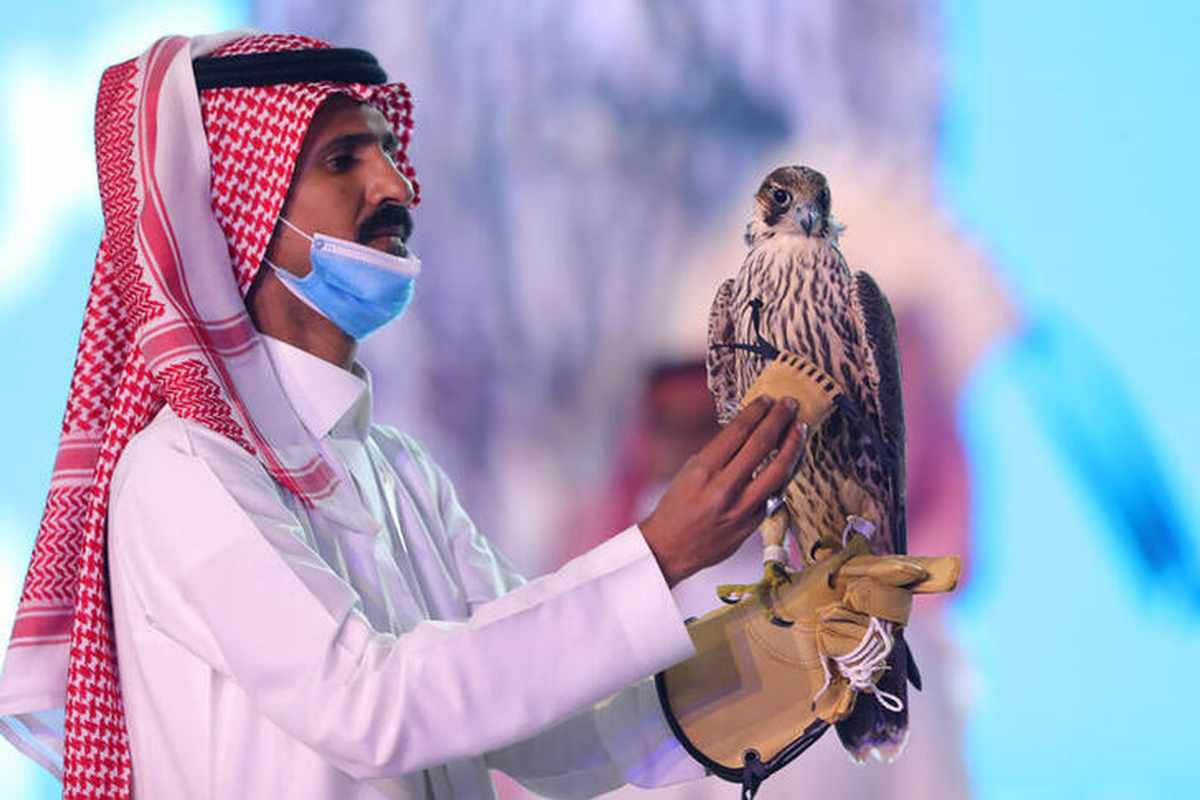 In its first edition, the IFBA, organized by the Saudi Falcons Club (SFC) displayed over 200 falcons from 14 countries to bidders, breeders, and falconers, including seven European falcons from Germany, France, Spain and the UK.

Sandra Boehm, owner of FB Falcons Farm, near Strasbourg, France, has been caring for the majestic birds since she was a child, her father being a falconer himself. She learned the ropes and with time, she put her interest and care into a growing business. The farm has 130 falcons, mainly gyrfalcons, which are Boehm’s favorite breed, and pilgrims (shaheen).

“My dad has been passionate about falcons since he was young. Initially a falconer, he began breeding peregrine falcons and peregrine gyrfalcons in 1995. It was in 2005 that he decided to devote all his time to his passion and he created his company where I help him daily. In 2020 I took over the family business which is now called SB Falcons,” Boehm said.

“Our farm is ideally located in a quiet area in the countryside and is an environment that allows falcons to be as close as possible to their natural habitat,” she told Arab News. “Our facilities are of high quality and we have open air breeding cages that make falcons more comfortable. We also have a large training cage … area of 1,000 square meters to help them build muscles and learn to hunt safely.

“We are three people taking care of our falcons and we are a productive family; even our children love to help us whenever they can,” she said. Sandra explained that open air cages are preferred to allow falcons to get a natural sense of their surroundings, including a clear view of the sky, but that for added protection, a high wall was erected surrounding the cages in case of issues such as drastic weather changes that could injure the birds.

“Personally, it’s important that falcons be close to the surroundings, the natural environment and nature, seeing other birds soaring above them naturally,” she said, adding that “it is difficult to raise falcons in harsh conditions such as that in the Middle East with the average high temperatures.”

Participating with 12 falcons of unique breeds at IFBA, of which she’s auctioning only four, Boehm said the 12 were selected for their speed and beauty, preferring to take migratory falcons.

She emphasizes that feeding the falcons, caring for them, and maintaining their facilities all take a significant amount of time. “This is a job that requires you to work seven days a week, but because it is our passion, we don’t keep track of the hours and work while we are having fun.

“We are not safe and we are prone to accidents or diseases, and this is life, but we are always happy when our falcons hunt or win cups,” she said, adding the greatest rewards for a falcon breeder is seeing their birds fly freely, and seeing satisfied customers.

She had previously competed in international falconry competitions with her other falcons and won cups in various championships, so as an owner of French falcons, Boehm is aware that prices might vary based on the pedigree, size, weight and quality of a falcon, whether it is a hunting or a racing falcon.

“Riyadh is located in the heart of the desert and this is a different landscape from France. As for the international auction site for falcon farms, it is very beautiful and luxurious as well. It also features a wonderful auction room and a giant screen. Obviously, everything here has been well-planned.”

While at the event, Boehm was introduced to the SFC’s most promising program, “Hadad,” to return falcons to their original habitats and help preserve and maintain their population. With the first phase launched last December, the falcon breeds that are included in the program are the wild Saker falcon and Peregrine falcon.

“I believe it is important to keep falcons in their natural habitat. This is a great initiative,” she said.

The program will be implemented in collaboration with the Special Forces for Environmental Security, the National Center for Wildlife Development, and other organizations.

“I was glad to speak with the Hadad Program representative and I believe it is important to keep falcons in their natural habitat,” Boehm said.