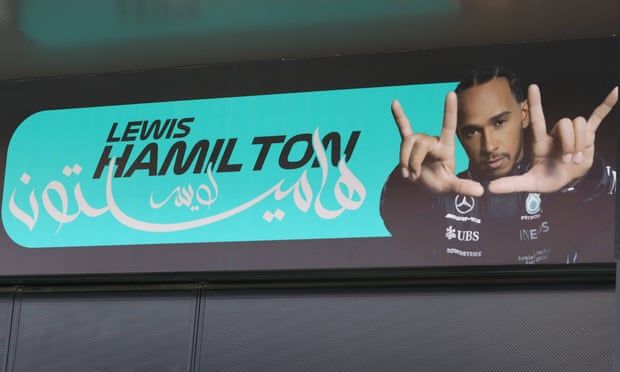 In documents sent from Abdullah al-Howaiti’s prison cell and seen by the Guardian, he cites the torture and abuse he says he has suffered at the hands of the Saudi authorities as F1 once more prepares to race in the country that recently carried out 81 executions in a single day. In a report issued in January, a group of UN experts classified some of Saudi Arabia’s violations of international law as potentially “crimes against humanity” as the state continues to execute minors.

When Saudi Arabia held its first grand prix last year, Hamilton was critical of F1’s decision to race there. “Do I feel comfortable here? I wouldn’t say I do,” he said. “But it’s not my choice to be here, the sport has taken the choice to be here.”

Howaiti was arrested when he was 14, accused of the robbery of a jewellery store during which a policeman was killed. His family maintain, with CCTV evidence and written statements from witnesses, that he was nowhere near the store at the time but with friends.

He has stated in diary entries from prison, seen exclusively by the Guardian, that after arrest he was repeatedly tortured until he signed a blank piece of paper as a confession.

“He continued beating me, and every time I took my foot off the table, he beat me on my body until I passed out. He poured water on my face and turned on the air conditioning on cold and made me stand against it for half an hour,” Howaiti records, and also states that he was forced to participate in torturing his own brother.

Regardless of the doubt as to his guilt or otherwise, the sentence stands in contradiction to Saudi Arabia’s repeated public claims that no one in the country will be executed for a crime committed as a minor. His family have made a heartfelt plea to Hamilton to intervene.

“Our cries for justice have not been heard,” they wrote to the seven-time world champion. “Maybe, if you say his name, those who decide his fate will listen. Will you raise your voice to save Abdullah? Whether this is in private conversations with the authorities or in public while you are here in Saudi Arabia to race, we believe it can make a difference.”

The United Nations’ Working Group on Arbitrary Detention has issued a damning assessment of Howaiti’s case. It stated serious doubts over the legitimacy of his trial, that the courts ignored his age, in breach of the UN convention on the rights of the child, and that there is a systemic problem with arbitrary detention in Saudi Arabia, noting: “Widespread or systematic imprisonment or other severe deprivation of liberty in violation of the rules of international law may constitute crimes against humanity.”

The UN high commissioner for human rights, Michelle Bachelet, condemned the recent executions and reported the UN believed that of the 81 convicted of “terror offences”, 41 were Muslims from the Shia minority who had taken part in anti-government protests, calling for greater political participation.

Last week the sport’s chief executive, Stefano Domenicali, said he was alarmed at the executions but insisted F1 could “shine a spotlight” on human rights abuses. The Reprieve director, Maya Foa, dismissed his argument. She said F1’s presence in Saudi Arabia was sportswashing, bringing legitimacy to the regime.

“By racing in Saudi Arabia, Formula One is effectively saying that executing people for taking part in pro-democracy protests is OK,” she said. “It’s telling the Saudi authorities they can wash out the bloodstains of a mass execution and show up at the chequered flag days later to hand over a trophy. The almost daily executions this week show they have heard this message loud and clear.

“F1 showed it is capable of decisive action to protect human rights when it dropped the Russian GP in a matter of hours. Its failure to respond to Saudi Arabia’s execution crisis is a shameful double standard.”

The Saudi authorities were contacted for a comment but did not reply. F1 issued a statement reiterating: “We take our responsibilities on rights very seriously and set high ethical standards for counterparties and those in our supply chain, which are enshrined in contracts, and we pay close attention to their adherence.”