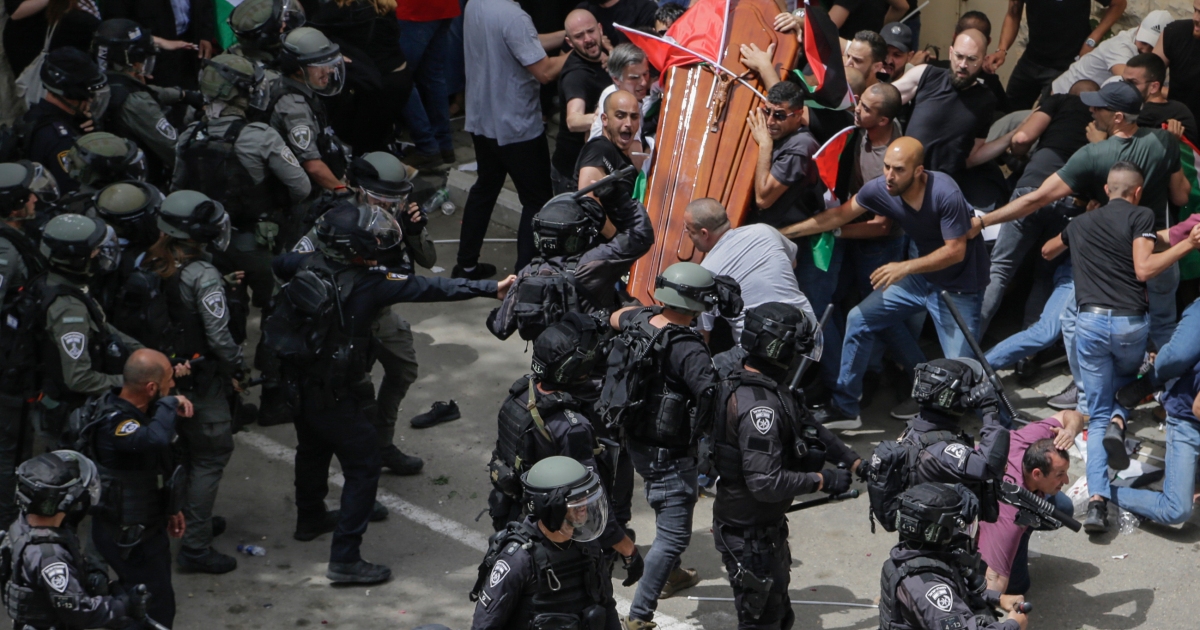 Amro Abu Khudeir’s lawyer said that the interrogation of the man called ‘the coffin protector’ was about the funeral.

One of the Palestinian pallbearers attacked by Israeli police while carrying the coffin of veteran Al Jazeera journalist Shireen Abu Akleh at her funeral on Friday has been arrested by Israeli authorities.

A lawyer representing the 34-year-old Amro Abu Khudeir said that the Jerusalemite had been arrested at his home in the Shuafat area in the early hours of Monday morning, and had been repeatedly interrogated about events surrounding the funeral.

The lawyer, Khaldoun Najm, added that Abu Khudeir had been held in solitary confinement since his arrest.

“He gets no light or sense of the time of day in his two-metre-by-one underground cell,” Najm said.

Najm added that Abu Khudeir had attended a court hearing on Monday and had had his detention extended until Sunday.

The Israeli police said the arrest of Abu Khudeir was not related to his involvement in the funeral procession.

Abu Akleh, a 51-year-old Palestinian-American journalist, was killed by Israeli forces during her coverage of an Israeli raid on Jenin refugee camp in the northern occupied West Bank on May 11.

Israeli police attacked pallbearers and mourners at Abu Akleh’s funeral as the event was broadcast live on television around the world, with thousands gathered to see her coffin transferred from St Joseph Hospital to her final resting place on Mount Zion, just outside the Old City in Jerusalem.

Abu Khudeir stood out in television footage of the funeral, which showed pallbearers struggling to stop Abu Akleh’s coffin from falling to the ground as Israeli police attacked the mourners using batons. The move drew worldwide condemnation and calls for an investigation, including from the United Nations.

Abu Khudeir was nicknamed “the coffin protector” after he was seen holding onto the coffin despite being beaten aggressively by the police.

While several pallbearers were beaten by Israeli police, Najm says Abu Khudeir was the only pallbearer to be arrested by Israeli authorities after the funeral.

“Israeli intelligence alleges that Amro worked with a terrorist organisation and that he has a secret file with the intelligence,” Najm told Al Jazeera.

However, Najm said that seemed unlikely because Abu Khudeir informed him that all the questions during his interrogation had been related to the funeral.

“Amro was asked why he insisted on carrying the coffin and making sure it didn’t fall to the ground,” said Najm. “The main focus of the questions was about him being a pallbearer at Abu Akleh’s funeral.”

Najm said that Abu Khudeir, a father of two, was a well-known activist in Jerusalem and had been arrested by Israeli police in the past.

An Israeli police spokeman said in a statement to Al Jazeera that the arrest of Abu Khudeir was unrelated to the funeral procession.

“The suspect was arrested as part of an ongoing investigation which contrary to allegations, had nothing to do with his participation in the funeral procession,” the statement said.

“We do not intend to elaborate on an ongoing investigation, but we will note that the suspect’s detention has been extended by the court.”

Israeli police forces also seized Palestinian flags from the mourners at the funeral, as well as smashing the window of the hearse carrying Abu Akleh’s body and removing a Palestinian flag from it.

Israel ordered an investigation into the conduct of its officers at Abu Akleh’s funeral, as the Palestinian Authority said it welcomed international support in investigating her killing.