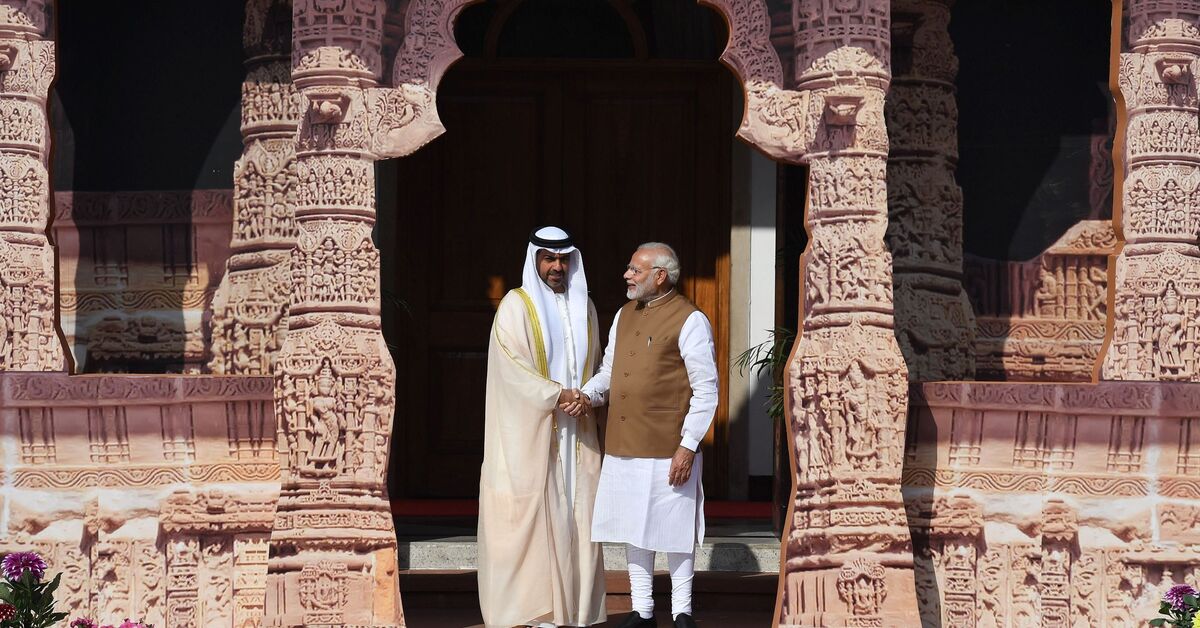 The two richest states in the Persian Gulf region find themselves locked in competition to maximize opportunities for stronger economic ties to Indian markets.
DP World, a leading global company from UAE, has recently launched plans to develop logistics infrastructure in the territory of Jammu and Kashmir in India. Though an initial memorandum of understanding was signed between the government of Dubai and the government of Jammu and Kashmir in 2018, the deal has now been formalized according to an announcement in late October.

DP World chairman and CEO Sultan Bin Sulayem had projected India’s logistics sector to be worth $215 billion in 2020, with 34 logistics parks and 1,300 infrastructure projects underway. Handling a quarter of India’s total container trade volume, DP World had invested over $2 billion in ports and logistics infrastructure.

Another $3 billion will be invested in partnership with India’s National Investment and Infrastructure Fund now. Also, four weekly flights from Srinagar to Sharjah have been started, to boost trade and tourism between the two countries.

Mainly due to geo-economic reasons, New Delhi has been a favorite strategic ally of Riyadh and Abu Dhabi for several years. Saudi Arabia is India’s second largest oil supplier and fourth biggest trading partner, with bilateral trade valued at $27.48 billion in 2017-18. In addition, during Crown Prince Muhammad bin Salman’s visit to India in 2019, potential investments worth $100 billion were announced.

On the other hand, Abu Dhabi is New Delhi’s second-largest trading partner, with non-oil trade worth $40 billion. DP World operations handled 15 percent of India’s non-oil imports in 2016. Therefore, the UAE has a strong economic presence in India.

Previously, Abu Dhabi’s grip on the Indian market posed no problem, but Saudi-UAE ties have changed this year. In their haste to diversify and rebuild their post-oil economies, both the Arab states have become rivals. Riyadh is trying to replace Dubai as the regional economic hub and has achieved its purpose to some extent due to its sheer size and economic potential. In response, the UAE announced some innovative projects and relaxed visa regulations to attract more foreign investment.

Then in July, Riyadh ended preferential tariffs on goods made in free zones like the UAE. Next, the two Arab states had a rift at OPEC over oil production. As Amir Khan, a senior economist at the Saudi National Bank described to Reuters, “The idea once was to create a GCC market, but now there’s realization that the priorities of Saudi Arabia and the UAE are very different.”

Discussing this situation with Al-Monitor, Ashok Swain, professor of peace and conflict research at Uppsala University in Sweden, said, “Though Saudi Arabia and UAE are close allies, the bilateral economic competition is becoming acute. Despite being a smaller country, the UAE has been ahead in the business, trade, and tourism sectors, but Saudi Arabia is trying to gain the upper hand as it prepares itself for a post-oil world.”

Considering that both states have major economic stakes in India, some rivalry is bound to emerge. “The competition will be challenging as the UAE has become closer to the US on the diplomatic front by becoming a valuable political and military asset," Swain said. Similarly, the UAE has also developed a much stronger relationship with India.”

Two years ago, Riyadh announced potential investments worth $100 billion, but the progress is relatively slow. Investing in India’s energy sector, in early 2019 Saudi Aramco had planned to buy a $15-16 billion stake in India’s Reliance Industries Oil and chemicals.

At that time, it was an attractive deal for Reliance, but Aramco’s changed standing since then would make it more beneficial now for the Saudis. Re-affirming Riyadh’s interest in the project last year, the Saudi envoy to New Delhi, Saud bin Mohammed Al Sati, has said plans are on track and investment opportunities in other sectors are also being discussed.

Though incomplete, the partnership remains alive and Aramco chairman Yasir Al-Rumayyan was recently appointed as an independent director on the Reliance board.

A business upgrade with India can also help Saudi Arabia realize its Vision 2030 strategic goals. Consequently, a Strategic Partnership Council was set up by both countries and Riyadh launched a Labor Reform Initiative to facilitate migrant Indian workers. Nevertheless, it is Abu Dhabi which has deeper connections with New Delhi.

“There are twice as many Indian migrants living in the UAE as in Saudi Arabia," Swain said. "The UAE is India’s top trading partner in the Middle East region, and both want to double their non-oil trade in the coming five years. … New business ventures of the UAE in India will further strengthen their relationship.”

The UAE has also announced plans to double its non-oil trade in India to at least $100 billion over the next five years, and UAE Minister of State for Foreign Trade Thani Al Zeyoudi was in New Delhi recently for talks with his counterpart Piyush Goyal regarding an economic pact to boost business, investment and jobs.

“What is happening here is these are the two biggest economies in the region, in the Arab world," Abdulkhaleq Abdulla, a political science professor in the UAE, told CNBC. "And as Saudi Arabia wants to reform its economy, privatize, etc, there is bound to be competition between them. … And it is bound to intensify in the days to come.”

Michael Tanchum, a senior fellow at the Austrian Institute for European and Security Policy and a non-resident fellow in the economics and energy program at the Middle East Institute in Washington DC, told Al-Monitor that although the UAE’s commercial ties with India are quite advanced, Saudi Arabia possesses advantages of its own.

“Aside from Saudi Arabia’s natural and financial resources, the kingdom has advantages in geography," Tanchum said. India’s existing "Arab-Med" commercial corridor involves the UAE, Saudi Arabia, Jordan, Israel and Greece, and "India and Saudi Arabia have the possibility to establish a similar corridor via Oman and its port of Duqm. Moreover, Saudi Arabia’s Red Sea coast could offer many geo-strategic benefits for India.”

Tanchum feels the two GCC states would work in tandem. ”The current scale of Saudi Arabia’s business relationship with India should not be under appreciated nor the Saudi-India synergies that are likely to grow in the future," he said. Saudi Arabia and the UAE "are also working together to form a trilateral commercial relationship with India in several sectors, as exemplified by Saudi Aramco’s partnership with UAE’s ADNOC that is investing $44 billion in separate refinery and petrochemicals complex in Maharashtra.”