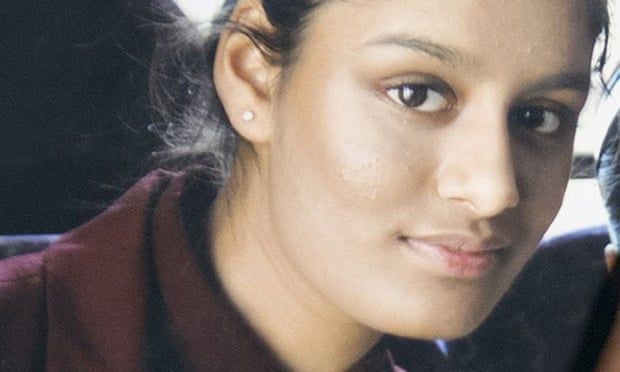 Canada and UK accused of covering up involvement of double agent in British teenager’s recruitment for IS
Shamima Begum was smuggled into Syria for Islamic State at the age of 15 by a Canadian spy whose role was covered up by the police and Britain’s security services, it has been claimed in a book out this week.

Begum, along with her schoolfriends Kadiza Sultana, then 16, and Amira Abase, then 15, were met at Istanbul bus station for their onward journey to Syria by a man called Mohammed al-Rashed.

Rashed was also an informant for Canadian intelligence, who told the Met police of their connection with him in March 2015, a few days after she had crossed the border to join the terrorism group. But neither the British nor Canadian authorities have previously acknowledged the link.

The claim is made in The Secret History of the Five Eyes by Richard Kerbaj, which is published on Thursday. Five Eyes is the network of intelligence-sharing between Britain, the US, Canada, Australia and New Zealand.

It reports that two officials from the Canadian Security Intelligence Service (CSIS) met then Met head of counter-terrorism, Richard Walton, in March 2015, shortly after Begum’s disappearance, a meeting that the senior police officer felt was self-serving.

They said they hoped that the CSIS would not become a focus for investigation, prompting some concern in the mind of Walton.

“If you are running agents you are acquiescing in what they are doing,” Walton said in an interview for the book, although he also acknowledged there may have been some intelligence benefit to the relationship.

At the time, the Met was engaged in a frantic search for the girls. Two are now dead, but Begum had her British citizenship revoked in 2019 after the then home secretary, Sajid Javid, decided she had aligned with IS because she had remained on the group’s territory and constituted a danger to the British public.

Her family’s lawyer, Tasnime Akunjee, argues that Begum was trafficked out of the country. The suggestion that a western intelligence asset may have been involved, including organising bus tickets for her, will reignite the debate over the removal of her British citizenship.

Rashed was a double agent who shared Begum’s passport details with Canada and smuggled dozens of others from Britain to fight for IS. But he only told his Canadian handlers that Begum had travelled to Syria four days after she left Britain, when she had already crossed the Syrian border.

Maya Foa, the joint executive director of Reprieve, a human rights group that has been closely following the case, said the contents of the book posed “concerning questions about what the UK government knew about Shamima’s trafficking” and that “rather than try to protect three vulnerable British children who had been groomed and trafficked, the government chose to demonise them”.

British sources, however, said they believed there was no suggestion that Begum travelled involuntarily to Syria, despite her young age. Officials believe she aligned herself with IS by remaining with the group in Syria and Iraq past the age of 18, and that she posed a security risk to the UK.

The CSIS “remained silent about the explosive allegations, taking refuge in the one thing that protects all intelligence agencies, including those within the Five Eyes, against potential embarrassment: secrecy”, writes Kerbah in the book.

“For seven years now this has been covered up by the Canadians,” Kerbaj told the Guardian. He said he interviewed multiple Canadian intelligence officials for the book, who confirmed the timeline of events.

He said British authorities also failed to be open once they learned of Rashed’s role for Canada in recruiting the girls. “I think they felt on balance that it’s best not to discuss this because there were still British and other western hostages in Isis territory,” Kerbaj said.

Last year, the supreme court upheld a 2019 decision to bar Begum, now 23, from returning to the UK. Begum lives in a detention camp in northern Syria, having given birth to three children, all of whom died young.

There was no suggestion in the supreme court judgment that the British authorities knew the circumstances of her smuggling into Syria.

Begum is due to make a fresh case at the special immigration appeals commission in November.

Akunjee said a key argument in the case would be that Javid, as home secretary at the time, did not consider Begum was a victim of trafficking.

“The UK has international obligations as to how we view a trafficked person and what culpability we prescribe to them for their actions,” he told the BBC.

Akunjee said as a western intelligence asset Rashed was someone who was “supposed to be an ally, protecting our people, rather than trafficking British children into a war zone”. The lawyer added: “Intelligence-gathering looks to have been prioritised over the lives of children.”

In 2013, two years before the girls were taken to Syria, Rashed went to the Canadian embassy in Jordan to apply for asylum, the book claims. It is also stated he claimed that Canada told him he might get citizenship if he collected information about IS activities.