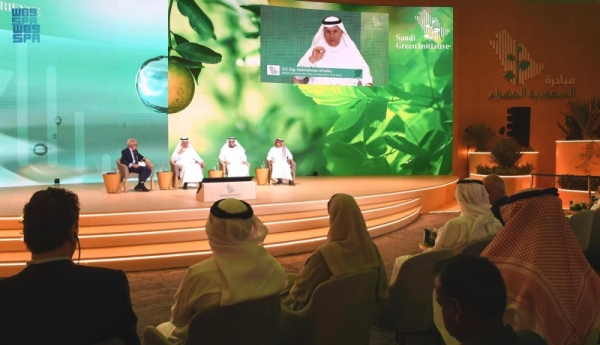 Saudi Arabia has unveiled updates on its Saudi Green Initiative (SGI) targets on the first day of the SGI Forum in Sharm El-Sheikh.
Over the past year, Saudi Arabia has accelerated the pace of its climate action. The Kingdom will achieve the SGI target of placing 30% of its land and sea under protection by 2030, and plant over 600 million trees within the same timeframe, an increase of over 150 million trees from the initial goal to plant 450 million by 2030.

The country’s pledge to reduce emissions by 278 mtpa by 2030 through the Circular Carbon Economy (CCE) approach is on track. In line with the Kingdom’s ambition to achieve 50% power generation capacity from renewables by 2030, 13 new renewable energy projects with a total capacity of 11.4GW, at an estimated investment value of US$ 9 billion (SR34 billion), are under development. The projects, once operational, are set to reduce around 20 million tons of CO2 emissions per year.

Supporting the delivery of the SGI emissions reduction target and the Kingdom’s ambition to become the world’s foremost low-cost producer and exporter of clean hydrogen, the world’s largest green hydrogen plant is under construction and set to start producing up to 600 tons per day in 2026. Aramco, SABIC and Ma’aden have received the world’s first independent certifications recognizing blue hydrogen and ammonia production, further enabling Saudi Arabia’s export infrastructure for clean fuels.

In his keynote speech at the SGI forum, Prince Abdulaziz bin Salman, Saudi Arabia’s Minister of Energy, said: “The entire government is working in unison to deliver the Saudi Green Initiative. Next year, we will be finalizing the plans for developing 10 more renewable energy projects and connecting an additional 840 MW of solar PV power to our grid. Today, we are announcing that we will launch a GHG crediting and offsetting scheme at the beginning of 2023 to support and incentivize efforts and investments in emission reduction and removal projects in all sectors in the Kingdom.”

During the SGI Forum, the Minister of Energy announced the signing of a Joint Development Agreement with Saudi Aramco for one of the largest planned Carbon Capture and Storage (CCS) hubs in the world. The center in Jubail Industrial City will start operating by 2027 and be able to extract and store 9 million mtpa of CO2 in its first phase, supporting Saudi Arabia’s aim to extract, use and store 44 mtpa of CO2 by 2035.

At this year’s SGI Forum, Prince Abdulaziz also witnessed the launch of three pilot projects for carbon capture and utilization led by KAUST, NEOM and SEC; Alsafwa Cement Company and Ma’aden and Gulf Cryo, to further the implementation of the circular carbon economy framework and reduce emissions in hard-to-abate sectors.

Also speaking on the opening day of the SGI Forum, Abdulrahman AlFadley, Saudi Arabia’s Minister of Environment, Water and Agriculture said: “Saudi Arabia is taking environmental action on a national, regional and international level. As a global community, we have to work comprehensively and take multiple actions in parallel. In Saudi Arabia we have a clear strategy that identifies the gaps we have in our environmental policy and works to find nature-based solutions.”

Since the launch of the Saudi Green Initiative, over 18 million trees have been planted, and 17 new initiatives launched across the country to restore natural greenery and protect against the impacts of climate change. Out of the total, 13 million trees planted in the Kingdom this year were mangroves.

The regeneration of Saudi Arabia’s natural wetland forests is a living barrier against shoreline erosion and a natural defense against climate change, with the trees sequestering five times more carbon than tropical forests. In contribution to the 10 billion trees target this year, NEOM has announced that 1.5 million hectares of land will be rehabilitated, and 100 million native trees, shrubs and grasses planted by 2030.

To protect marine biodiversity, an institution has been established to preserve coral reefs and protect the habitats of sea turtles in the Red Sea. Saudi Arabia also announced that 60,000 hectares of degraded land in the country have been rehabilitated.

Approximately 100 carefully chosen species of native and adaptive trees are being cultivated in dedicated nurseries before being planted in 62 approved sites around the country to restore natural vegetation cover, protect biodiversity and bind the soil to protect against dust storms. These coordinated national measures have enabled the Kingdom to increase the size of areas under protection fourfold from what it was in 2016.