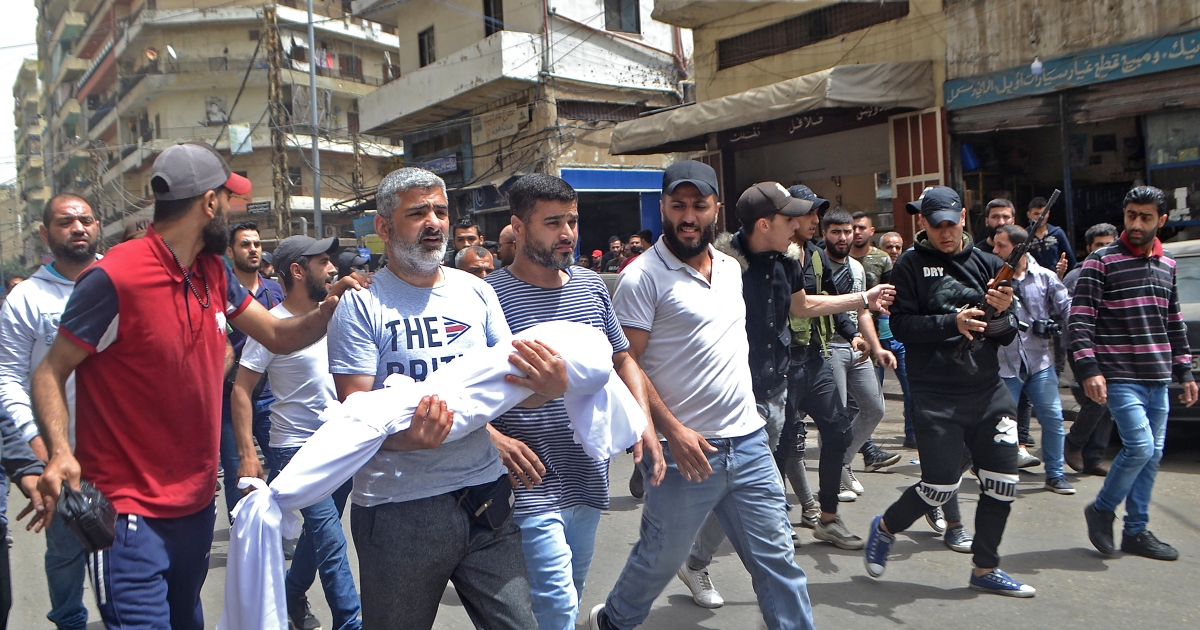 Lebanon boat survivors wait for news of missing loved ones

Mohamad Dinnawi sat with his brother Hussein at their home in Tripoli, anxiously waiting for a phone call from the hospital.

Hussein and his wife Samar Al-Qaroush boarded a crowded boat on Saturday, headed to Italy to find work and support their families.

But, not long into the journey, the boat sank, after a confrontation with the Lebanese navy. It was just a few minutes away from reaching international waters, survivors told Al Jazeera.

At least six people have drowned, among them a little girl, and the number could yet rise.

Hussein is shell-shocked, and struggled to speak after narrowly surviving at sea.

But his wife Samar is still missing.

The sounds of gunshots echo around Lebanon’s second-largest city, as families bid farewell to their loved ones who drowned. The Dinnawis fear Samar could be next.

Hussein has already visited the hospital after receiving word that it had retrieved a woman’s body, but it was not Samar, who is among many passengers still missing at sea.

“After our father passed away, we had more responsibilities towards our family,” Mohamad told Al Jazeera. “But we’re unemployed and rely on aid, so Hussein and Samar wanted to try to find opportunities elsewhere.”

The Lebanese navy and some passengers estimated that the ship carried approximately 60 people. But the real number could be higher.

Speaking to Al Jazeera, an army spokesman estimated that the boat may have had up to 75 people on board.

“There were three smugglers involved, and each brought their own cohort of people. So we don’t know the exact numbers.” the spokesman, who did not wish to be named, said. “We have apprehended one of them who had brought in some 20 people.”

The navy said in a statement that the boat carrying the migrants crashed into one of three navy vessels and sunk within seconds. The authorities are carrying out an investigation into the incident, but it is unclear when the findings will be announced.

Many of the passengers rejected the military’s statement, and blamed it for the casualties.

“The officer on the big vessel told us to stop, but we didn’t. [He] then received a call with an order, hung up his phone, and then they rammed into us,” he recalled. “We were drowning, but they turned off their lights and moved away from us.”

Maher said that he had lost his voice, and could barely speak as he recalled what happened. He and the other young men on the boat swam towards the vessels, urging them to help families on board, among them children.

“I was screaming, ‘There are children with us, they’re going to drown!’, but they wouldn’t answer and just threw us a rope,” Maher said, trying to hold back his tears.

Maher is among several passengers who said that no smuggler was involved in the operation, and that people pooled whatever money they could get to pay for the boat, and equip it with a new engine, GPS system, and other supplies.

“Hussein sold some of his furniture,” Mohamad recalled. “Some other people borrowed money.”

Lebanon’s dire financial crisis over the past two years has slipped over three-quarters of the population into poverty. Many Lebanese are struggling to cope with skyrocketing inflation, crippling power cuts, medicine shortages, and an absence of viable social services.

Many Lebanese, Syrian and Palestinian families have resorted to selling everything they own, and trying to migrate by sea to Europe to find job opportunities.

According to the United Nations, in addition to Saturday’s shipwreck, at least three boats have departed Lebanon for Europe, and almost 40 boats have tried to leave the country since late 2020.

Last October, some 80 Lebanese and Syrians in Tripoli tried to journey to Italy, before the Greek coastguard allegedly pushed them back to Turkey.

The disaster has led to an outpouring of popular anger.

Some residents in Tripoli clashed with the Lebanese army following a funeral of one of the victims on Sunday, while others tore down the portraits of politicians in their neighbourhood ahead of the country’s parliamentary elections next month.

“No leader is welcome to speak to us, because all they will do now is exploit our pain,” Mohamad said as he comforted his brother Hussein. “Whatever they say won’t return the loved ones we’ve lost.”

Maher, an unemployed mechanic, told Al Jazeera that he had no hope in an investigation and that he did not believe he would get any closure to what he described as a “living nightmare”.

“Our own government is killing us, and will never care if we die as long as they keep making deals for their own benefit,” he said. “I beg the international community to please save us from this situation.”