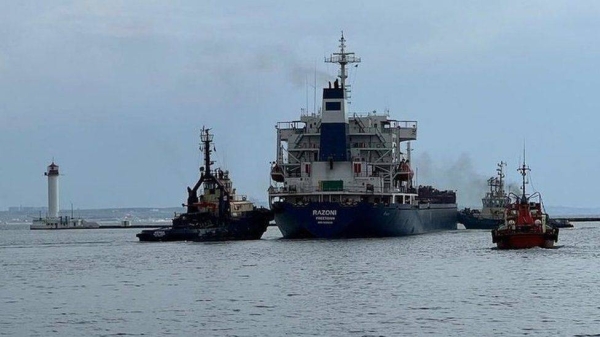 The first ship carrying grain has left a Ukrainian port under a landmark deal with Russia.
The UN, EU, Ukraine and Russia have all welcomed the departure of the ship carrying Ukrainian grain from the southern port of Odesa, the first since Moscow's invasion in February blocked shipping through the Black Sea.

The Razoni, a Sierra Leone-flagged vessel carrying 26,000 tons of grain, is heading for Istanbul before sailing on to Lebanon. Turkish and Ukrainian officials say the ship left Odesa early on Monday morning local time.

Russia has been blockading Ukrainian ports since February, but the two sides made a deal to resume shipments.

It is hoped the agreement will ease the global food crisis and lower the price of grain.

Turkey said the Razoni would dock at the port of Tripoli in Lebanon, adding that further shipments were planned over the coming weeks.

The Joint Co-ordination Center, set up in Istanbul under the deal, said the ship was carrying some 26,000 tons of corn and was expected to arrive in Turkish waters for inspection on Tuesday.

UN Secretary-General António Guterres welcomed the departure of the ship and hailed Turkey for its role in working to implement the agreement.

"Unlocking ports will provide at least $1 billion in foreign exchange revenue to the economy and an opportunity for the agricultural sector to plan for next year."

While the sight of the Razoni, with her stowed white cranes and long blue hull, inching out into the mine-infested Black Sea represents a significant development, the operation will have to last for a sustained period for either Ukraine's damaged economy or tens of millions of people around the world to benefit.

But Kubrakov emphasized that 16 other ships were waiting to sail out of ports in southern Ukraine, with Odesa, Chornomorsk and Pivdenny expected to be the main places of export.

Last month's deal — brokered by the UN and Turkey — took two months to reach and was set to last 120 days. It can be renewed if both parties agree.

The blockade of Ukraine's grain has contributed to a global food crisis with wheat-based products like bread and pasta becoming more expensive, and cooking oils and fertilizer also increasing in price.

Russia and Ukraine jointly produce nearly a third of global wheat supplies. In 2019 Ukraine accounted for 16% of the world's corn supplies and 42% of sunflower oil, according to UN data.

Ukraine's Foreign Minister Dmytro Kuleba called the shipment a "relief for the world" and urged Moscow to "respect its part of the deal". Kremlin spokesperson Dmitry Peskov told reporters in Moscow that the ship's departure was a "very positive" development.

Under the terms of the deal, Russia has agreed not to target ports while shipments are in transit and Ukraine has agreed that its naval vessels will guide cargo ships through waters that have been mined.

One engineer working on the Razoni told Reuters news agency that he was worried about the danger of sea mines.

"We hope that nothing will happen and that we will not commit any mistake. This is the only thing that I fear during this trip, as for the other things, we are used to them as sailors," Abdullah Jendi said.

Turkey — supported by the United Nations — will inspect ships, to allay Russian fears of weapons smuggling.

Trust remains low between officials in Kyiv and Moscow, and last month the deal was thrown into chaos less than 24 hours after it was announced when Russia launched two missiles at Odesa port.

Odesa MP Oleksiy Goncharenko told the BBC he expected shipments to continue from the other ports on Tuesday but warned Russia might attempt to disrupt them with further military action.

"We see these awful missile attacks against Odesa in the last days — that is just their attempts to increase the risks for ship owners, for crew, not to come to Odesa," he said.

In July, Turkey and the United Nations brokered a deal with Russia and Ukraine designed to help relieve a global food crisis caused by blocked Black Sea grain exports.

It was the first major deal between the warring sides since Russia's February invasion of its neighbor and comes as global food prices have soared, and people in some of the world's poorest countries are facing starvation.

Kyiv and Moscow signed two identical but separate documents at the request of Ukraine, which refused to initial any document with Russia.

Under the agreement, "safe corridors" allow the movement of cargo ships in the Black Sea, which "both sides have committed not to attack," said a UN official who requested anonymity.

Negotiators abandoned the idea of clearing the Black Sea of mines -- mainly laid by the Ukrainians to protect their coastline. "Clearing mines would have taken too long," the UN said, adding that "Ukrainian pilots" would clear the way for cargo ships within Kyiv's territorial waters.

But the deal was put in jeopardy within hours of being signed when Russia bombed the Ukrainian port of Odesa. And more recently a Russian strike killed one of Ukraine's richest businessmen who worked in grain exports — with Kyiv calling it a targeted killing.
#Facebook  #ANT